A dispute between Black community organizers and a developer who is poised to buy a beloved shopping mall brought scores of protesters to a heavily Jewish neighborhood in Los Angeles on Sunday, where they gathered outside the developer’s home to pressure him to back out of the deal.

The developer, Asher Abehsera of the real estate firm LivWrk, has reportedly agreed to purchase the Baldwin Hills Crenshaw Plaza from its current owner, a private equity firm, for $110 million, outbidding a coalition of community groups that sought to preserve local, Black ownership of the property through its redevelopment. Protesters march outside the home of the developer of the landmark Baldwin Hills Mall. Image by Judy Branfman

But the coalition, Downtown Crenshaw Rising, which financed a $100 million bid in August, says its offers were never taken seriously, and that it was not allowed to make a final and best offer on the property.

Moreover, protesters said Abehsera’s stewardship — LivWrk says it plans to spend $1 billion transforming it into a mixed-use commercial and residential hub — would deprive the community of economic self-determination and hasten the displacement of longtime residents.

“The ramifications of gentrification at the Crenshaw mall in this last bastion of Blackness are calamitous,” said Damien Goodmon, a Downtown Crenshaw Uprising board member who helped coordinate the protest. “It will rip the heart out of Black L.A.”

Abehsera did not respond to a request for comment. 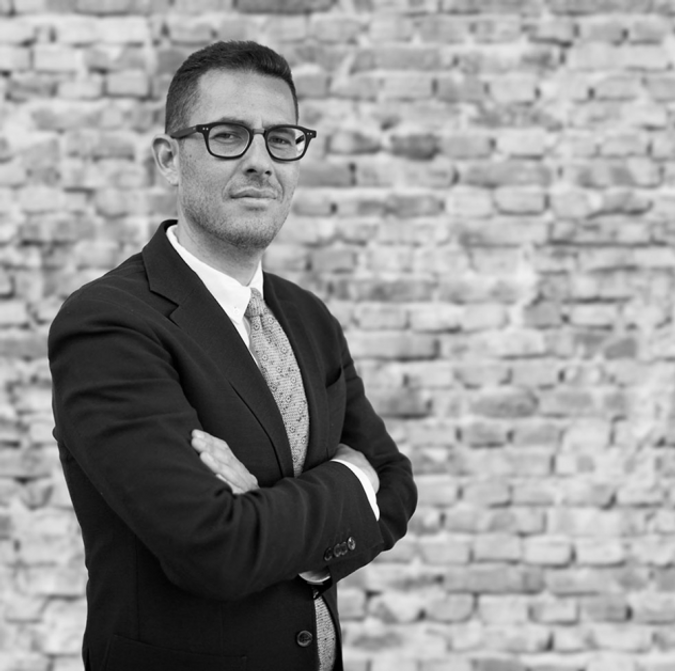 Once featured in the music video for Tupac Shakur’s “To Live and Die In L.A.,” the mall has become a flashpoint in the ongoing reckoning of racial injustice that began this summer.

Located in the heart of historically Black South Los Angeles, the shopping center has long been an economic lodestar and an unofficial cultural monument for the area’s residents. But like many malls, Baldwin Hills’ has fallen on hard times in the age of Amazon. Sears and Walmart, its anchor stores, both closed in the past five years and were not replaced. 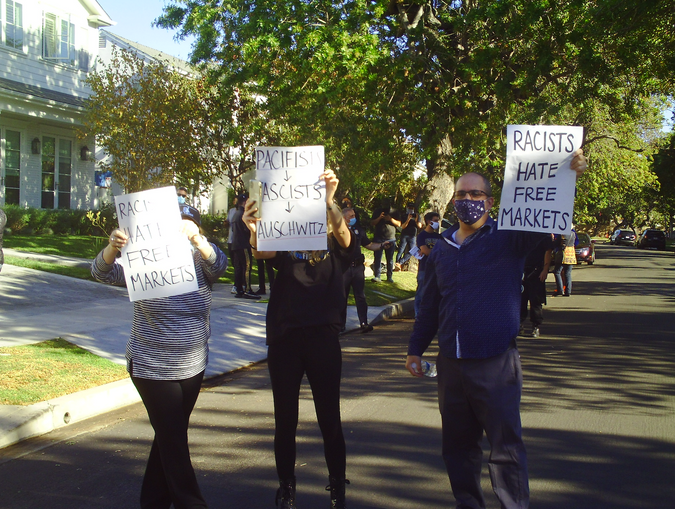 Counter-protesters march outside the home of the developer of the landmark Baldwin Hills Mall. Image by Judy Branfman

After the police killing of George Floyd inspired Black Lives Matter protests across the globe, the CIM Group, a Jared Kushner-connected venture which had committed to buy the mall in April, ceded to community pressure and backed out.

Though Abehsera has denied association with Kushner on this project, LivWrk has partnered with Kushner Companies on acquisitions in the past, which Downtown Crenshaw played up in flyers it distributed at the protest and around the neighborhood.

The flyers also call Abehsera a “tenant terrorizer” for the role LivWrk and Kushner Companies allegedly played in pushing tenants out of a property in Brooklyn, where LivWrk is based.

Goodmon, 38, who grew up walking distance from the mall in Leimert Park, said that Abehsera refusal to engage with the coalition is what brought the protesters to his doorstep. At stake in the protest, he said, was nothing less than “the soul of Black L.A.”

“It’s not just a piece of commercial real estate,” Goodmon said. “It represents the hopes the dreams of a community that has long been deprived of opportunities for community uplift and community wealth.”

Gathered outside Abehsera’s home on Sunday, about 75 protesters, some carrying signs, chanted “Whose streets? Our streets!” and “Whose mall? Our mall!”

Meanwhile, a dozen or so counter-protesters — unassociated members of the Orthodox Jewish community — shouted back at the crowd. One wrapped himself in an Israeli flag.

Nate Dakar, a marketing manager who lives in Beverlywood, 48, was holding up a sign that said “Racists hate free markets.” He felt that the group’s circling of the surrounding blocks was antisemitic, and that the same group would not have descended on the house of a non-Jew.

Moreover, he said protesters were referring to people as colonizers and chanting “You can’t hide, we can see your greedy side,” noting that the “greedy Jew” was a well-known stereotype.

Dakar, 48, had worked in South L.A., and said he understood the value of the mall to the community. Were it his development, he would want the input of the coalition. But, he said, “to come to a community and scare people, and to spread the hate” was the wrong way to go about making change.

He thought the residents should see any money entering their neighborhood as a positive.

“When investors want to invest in the community and rebuild it and rehabilitate it, that floats the boats for everybody,” Dakar said.

Wendell Robinson, who grew up within walking distance of the mall, attended the protest wearing a shirt that read “Respect Existence or Expect Resistance.”

He had heard the other side calling protesters racists and antisemites, but Robinson, 48, didn’t take them seriously.

“It just kind of rolled off — like that person is really uninformed and didn’t know what the issue is,” he said.

He envisioned a coalition-led mall redevelopment producing something more profound than a shopping center, a space where locals of all ages can develop and express their creativity.

Robinson doubted LivWrk would cede control to community members if the sale went through.

Even if it did, he added, it would be difficult to build community wealth through an outside developer. One of the details of Downtown Crenshaw’s plan is the ability for community members to buy shares in the mall, according to L.A. Taco.

“The way LivWrk projects have been developed, it leaves little room for compromise,” Robinson said.

Residents of other parts of Los Angeles participated in the protest and helped canvass the neighborhood afterward. Some of them, like Judy Branfman, were Jewish.

Branfman, 69, a documentary filmmaker and activist from Santa Monica, said Jewishness had nothing to do with the protest. But on a personal level, it determined the side she stood on.

“This is about social justice,” Branfman said. “And as far as I’m concerned, anywhere Jews are involved, the question should be, What is just?”

Rabbi Yosef Kanefsky, the head rabbi of B’nai David-Judea, an Orthodox synagogue just north of Beverlywood, was at the protest because he had volunteered beforehand to help keep the peace, and had not formed an opinion of it. A captain at the local police precinct had warned him that the presence of a counterprotest might cause emotions to boil over. (LAPD had multiple patrol cars stationed near the house.)

Though there was plenty of shouting going back and forth, Kanfesky said, he was happy to see that it never got worse than that.

“Unfortunately, people shouting at each other just don’t get anything done,” the rabbi added.

Kanefsky said he had heard chants about “your greed,” but assumed that was referring to Abehsera. Framing the protest as antisemitic struck him as a mistake.

“This has to do with grievances, and dreams, and frustrations, that pertain to the Black community,” he said.