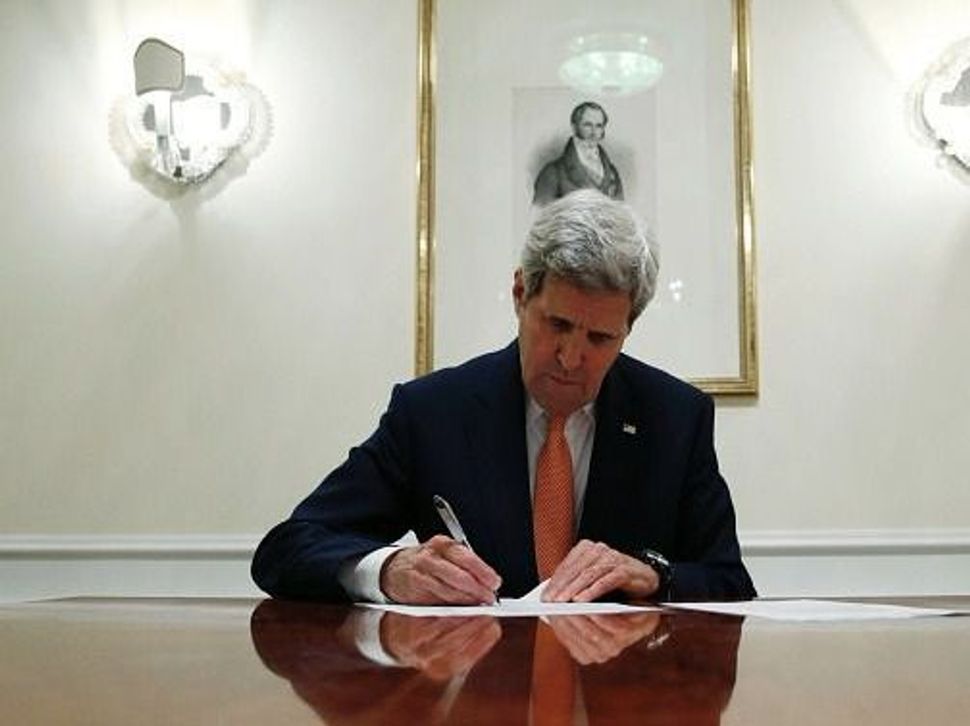 President-elect Joe Biden said Wednesday that he wants to revive the nuclear deal with Iran passed during the Obama administration, when he was vice-president.

Yet the same day Biden said he wanted to revive the deal, the Iranian parliament passed a law demanding that he, well, revive the deal. In other words, they demanded angrily that he do the very thing he said he would do.

Adopted in October of 2015, the deal — officially called the “Joint Comprehensive Plan of Action” — was intended to block Iran’s road to the bomb. It was set to last for 15 years, during which Iran would decrease its stockpiles of uranium, which is used to make nuclear weapons, and pursue a civilian nuclear energy program only. Also, it would submit to inspections.

In return, the U.S. and other signatories would unfreeze Iranian assets held in overseas banks and reduce sanctions barring many foreign companies from doing business with the Islamic Republic. Iran had about $100 billion in foreign assets that had been frozen to try to halt its nuclear program and the deal gave access to those assets back.

After its signing, Iran reduced its uranium deposits and consistently passed inspections by the U.N.’s nuclear watchdog, reported The Atlantic in 2017. As required by law, the U.S. recertified the deal every 90 days.

Even in Israel, where Prime Minister Benjamin Netanyahu’s government opposed the deal, some still acknowledged the deal’s benefits. Former leaders of both Mossad and the Shin Bet, Israel’s internal security service, said they supported the deal.

So why does the deal need to be revived now?

President Donald Trump withdrew the U.S. from the deal. He scoffed at it as one of several international agreements that put the U.S. in an unacceptably weak position, and he had legions of backers who had never liked it to begin with.

Even when it was originally signed, there was harsh opposition to the JCPOA among Israeli leaders and most of the Republican party who argued that it didn’t quash Iran’s nuclear ambitions, but just delayed them. They said inspection provisions were too lax and couldn’t prove that Iran hadn’t been cheating.

Trump reinstated sanctions and the Iranian economy took a massive hit. Pharmaceuticals are exempt, for example, but Iran’s inability to use international payment systems and foreign currencies have led to a shortage of medical supplies.

The U.S. wasn’t the only signatory, but it was the deal’s architect and strongest backer. After the U.S. withdrew, Iran began to do the same. In 2019, they announced they would no longer follow the limits imposed on uranium enrichment and stepped up production.

The U.S. and Iran both want back into the JCPOA, so what’s the problem?

On the Iranian side, the demands made to Biden probably don’t mean much in practical terms. The nuclear agreement is a convenient political symbol through which its parliament can vent at the United States.

That’s why it passed a law containing the unnecessary command that the U.S. re-enter the deal. It did so right after the assassination of Mohsen Fakhrizadeh, a scientist and senior official in Iran’s nuclear program. Iran is blaming their archenemy and U.S. ally, Israel. U.S. officials have corroborated the accusation, but Israel has not claimed responsibility.

The “one-way game is over,” said Mohammed Baqer Qalibaf, the speaker of the parliament and former mayor of Tehran, referring to the assassination of both Fakrizadeh and Iranian Revolutionary Guard General Qassem Soleimani, as well as to American withdrawal from the nuclear deal under Trump.

The law set a timeline for reviving the JCOPA, and also threatened an expedited schedule of upgrading and increasing the country’s uranium stores. Parliament has limited power to affect Iran’s foreign policy, however. All major decisions regarding the country’s nuclear program rest in the hands of Iran’s supreme leader, Ayatollah Ali Khameini, reports the Associated Press.

Parliament might have passed the bill as a show of strength to the Iranian citizenry.

Can Biden bring the deal back?

Yes, but there will probably be more flexing and posturing now in addition to the new Iranian law.

Its passage signals that Iran’s hard-liners might make the negotiations that will accompany re-entry into the deal more complicated by asking for concessions in order to offset the hardships suffered during the time Trump withdrew.

On the other side, America’s allies in the region — Israel, Saudi Arabia and the Gulf States — might play the same game. Happy with a weakened Iran, they might push Biden to negotiate more stringent terms.