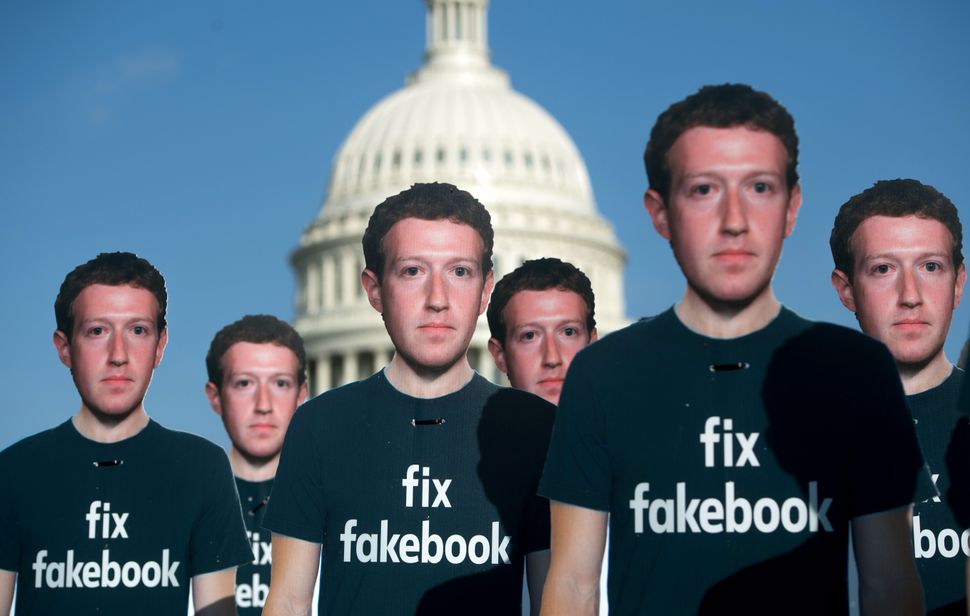 One hundred cardboard cutouts of Facebook founder and CEO Mark Zuckerberg stand outside the US Capitol in Washington, DC, April 10, 2018. Image by SAUL LOEB/AFP via Getty Images

Antitrust lawsuits filed Wednesday against Facebook focused on what plaintiffs say is the improper use of consumer data by the social media giant and a monopolistic strategy of squashing competition.

But while Facebook’s use of data has come under scrutiny over the years — including after the 2018 Cambridge Analytical scandal, during which users learned that their data had been harvested for targeted political advertisements without their knowledge — most of the recent public pressure on the company has concerned the proliferation of hate speech, incitement to violence and disinformation on its platforms.

Now, experts say the antitrust lawsuits might help push Facebook to take a harder line on hate speech — but not to count on it.

While the lawsuits by the Federal Trade Commission and 48 state and territorial attorneys general may not have concrete implications for Facebook’s handling of Holocaust denial, vaccine disinformation, QAnon conspiracy theories, voter suppression and other social ills, some think that increased competition could help solve the problem.

“Having a plurality of competitors can drive good behavior,” said Imran Ahmed, the founder of the Center for Countering Digital Hate. “When someone is able to act with impunity and is the only player in the market, it means there are few costs for bad behavior.”

Facebook has been criticized for recommending conspiratorial or hateful groups to users, actions that have contributed to the spread of conspiracy theories and eased recruitment for bad actors like white nationalist groups and supporters of the QAnon conspiracy theory. Facebook’s algorithm also prioritizes content that receives a lot of engagement, which boosts controversial content. The site has also failed to keep up with emerging groups like the boogaloo movement due to constantly shifting terminology and symbols.

Facebook has recently embarked on a spree of gestures of goodwill aimed at combating disinformation — including a ban on Holocaust denial after years of resisting calls from Jewish groups and others.

But critics say most of the actions have been PR stunts that haven’t led to meaningful change.

Observers have found, for instance, that Holocaust denial has persisted and restrictions on political advertisements after Election Day have not been enforced. The company did not respond to news reports about the persistence of Holocaust denial, but has subsequently removed post-election political ads.

Just as more market competition could increase pressure on Facebook to enforce its terms and conditions and follow through on the new initiatives it’s publicized, said Shireen Mitchell, founder of Stop Online Violence Against Women and Stop Digital Voter Suppression, the FEC and the attorneys general will gather evidence that could also give users new information about how their data might be harnessed to elevate conspiratorial or false content. That information could be fodder for future legal action.

Consumer protections are threatened when Facebook uses data to target disinformation to vulnerable people or those already belonging to related groups and pages, she said.

Mitchell said she hopes that once the plaintiffs “dig deeper” into how data and algorithms affect consumer protections, the public might learn about how “hate speech and incitement to violence” relate to data use.

The legal challenges against Facebook could take years to move through the court system, and the company has indicated it will resist any possible changes. In a statement responding to the Wednesday filings, the company said the lawsuits could create “resulting harm to consumers” and a “chilling effect on innovation.”

But the lawsuits have received bipartisan support. And for those fighting disinformation on Facebook, the suits, while not specifically about hate speech, are a step in the right direction.

One of the most prominent public pressure campaigns launched against Facebook this year was Stop Hate For Profit, an advertising boycott organized last summer in part by the Anti-Defamation League. The eventual return of advertisers to the platform despite the prevalence of hate speech, said CEO Jonathan Greenblatt in a statement, underscored the overpowering influence of the platform.

“Our society’s ability to hold tech companies to account for how they govern their platforms is broken,” Greenblatt said. “Because one man decided Holocaust denial was misinformation and not hate speech, against the advice of experts such as ADL and others in the Jewish community, that was the rule of law on the largest communication platform in human history for a decade. This cannot continue.”