Here’s how experts say Joe Biden should respond to the past four years of rising antisemitism. 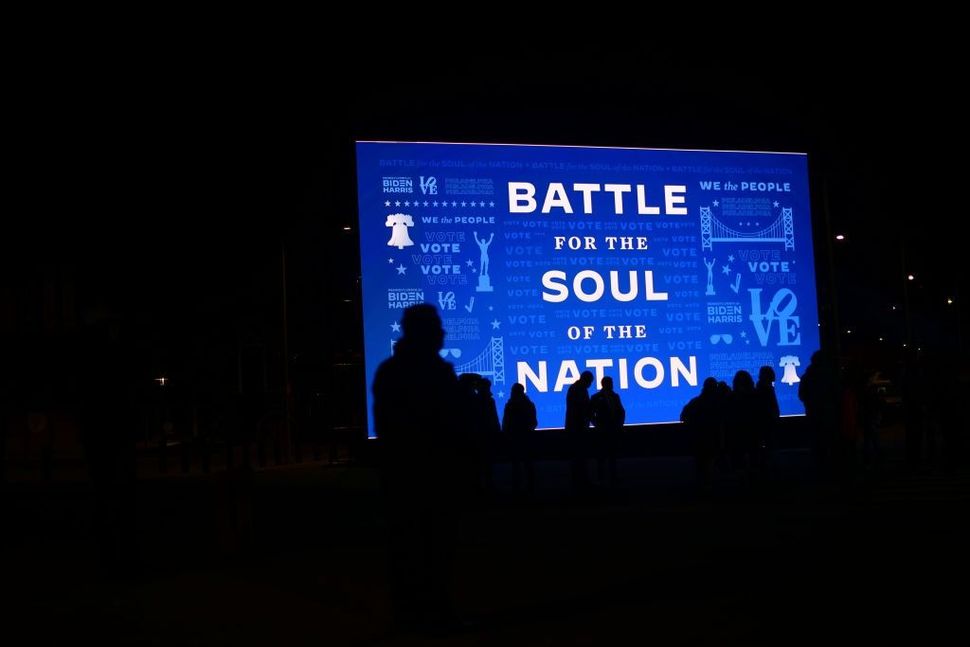 President-elect Joe Biden’s campaign regularly used “Battle for the Soul of the Nation” as a campaign message. The motto is seen here before Democratic Vice President-elect Kamala Harris spoke at a drive-in election eve rally on November 2 in Philadelphia. Image by Getty Images

President-elect Joe Biden announced his bid for the White House invoking the far-right protest in Charlottesville and ran a campaign focused on national unity, placing a “battle for the soul of the nation” above major economic or health-care reforms.

Biden’s rhetoric offered a sharp contrast with President Donald Trump, who has drawn ire for failing to forcefully condemn his white-nationalist supporters and making insensitive comments about a variety of minority groups including Jews.

Now, those who fight hate for a living are wondering how a Biden administration will differ from the last four years of Trump’s leadership when it comes to combating antisemitism. Most agree that simply changing the holder of the world’s most powerful megaphone will make a positive difference — but they’re also eyeing who Biden will appoint to fill key roles and how he will balance competing definitions of antisemitism.

Kenneth S. Stern, director of the Bard Center for the Study of Hate, said Trump’s rhetoric fueled a climate that fostered antisemitism even when his comments were directed at Mexican immigrants or Muslim-Americans.

“The tenor of the entire administration was basically to define an ‘us’ and a ‘them,’ as opposed to a common enterprise of Americans together,” Stern said in a recent interview.

Abe Foxman, former director of the Anti-Defamation League, broke his historic nonpartisanship to endorse Biden shortly before the election. Foxman said that while no president can stop antisemitism completely, Biden should use his massive platform to push back against discrimination.

Biden emphasized his commitment to using rhetoric to unify the country in a private call with civil rights leaders last week, The Intercept, a left-leaning news outlet, reported.

“The words of presidents matter,” Biden told the group, according to an audio recording obtained by The Intercept. But he also suggested a level of inflexibility, at one point shouting at Derrick Johnson, chief executive of the NAACP, who expressed concern about what he saw as a lack of racial diversity among the cabinet nominees Biden has named so far.

While Jewish groups are largely unified in seeking a renewed emphasis on fighting antisemitism from the White House, there is disagreement over how to balance concerns over right-wing white nationalism and left-wing criticism of Israel that some say bleed into bigotry.

Progressives generally think the Trump administration put too much emphasis on the latter. Secretary of State Mike Pompeo announced in November that he would seek to identify and defund nonprofits that support the Boycott, Divestment and Sanctions movement targeting Israel as part of the administration’s fight against antisemitism.

Trump also signed an executive order last year endorsing the International Holocaust Remembrance Alliance definition of antisemitism. While the definition itself does not mention Israel, it is controversial among critics of Israel and Zionism because it cites “denying the Jewish people their right to self-determination” as an example of antisemitism.

Stern, who runs the Bard center, said there is a tendency for a public figure’s stance on Israel to become paramount in debates over antisemitism, with those on the right defending people who support the Jewish state but may invoke antisemitic tropes, and the left tending to dismiss even legitimate claims that a critic of Israel is antisemetic.

“We tend to give extra berth or justification to people who see Israel the way that we do,” Stern said. “That doesn’t really help fight antisemitism.”

Many mainstream Jewish organizations support the IHRA definition, and a focus on anti-Zionism, as part of the fight against antisemitism. The ADL, for example, applauded Trump for signing the executive order last fall, and the Jewish Federations of North America in a November letter called on the incoming Biden administration to support legislation formalizing its adoption and broad application “throughout the federal government.”

But Morriah Kaplan of IfNotNow, a left-wing group focused on opposing Israel’s occupation of the West Bank, said that Biden needed to be “really disciplined” around the issue. While Kaplan, the group’s director of political education, acknowledged that criticism of Israel sometimes is antisemitic, she said IfNotNow opposes use of the IHRA definition because it blurs the line between antisemitism and legitimate criticism of Israel.

“Conflating activism targeting Israel with antisemitism has really muddled the popular understanding of antisemitism, which makes it harder to identify,” she said in a recent interview. “We hope that the Biden administration won’t be distracted by that.”

IfNotNow, which is best known for its strident protests targeting major Jewish institutions that it deems not critical enough of the Israeli occupation, was part of a coalition of leftist groups that called out antisemitism on the right during the 2020 campaign. And Kaplan said Biden’s focus once in the White House should be on fighting white nationalism and restoring funding to law-enforcement programs targeting domestic terrorism.

On this, IfNotNow and ADL — which staunchly supports Israel and has been an IfNotNow target — agree. Jonathan Greenblatt, ADL’s chief executive, said in an email interview that he hoped Biden would put an end to the current administration’s failure “to condemn white supremacy in a consistent and clear fashion.”

“The incoming administration should no longer downplay the threat posed by far-right domestic extremists,” Greenblatt said.

But if left-wing and more centrist groups find themselves on the same page over what Biden’s top priority should be, internecine conflict should still be expected on how Biden approaches accusations of antisemitism related to Israel.

The ADL, for example, also supports the IHRA definition. While it wasn’t the top concern he listed, Greenblatt said the Biden administration should pursue efforts to stop antisemitism on college campuses, an area that typically involves pitched debates over whether boycotts of Israel or attacks on students who support the Jewish state are rooted in legitimate political differences or bigotry.

Some other establishment Jewish organizations calling on Biden to combat antisemitism have eschewed mention of white nationalism altogether. One such group, the Jewish Federations of North America, which represents 146 federations, called for combatting antisemitism by providing $360 million in nonprofit security grants and a $10 million increase in funding for Holocaust education in its November letter to the Biden transition team.

In addition to a change in tone from the White House, advocates are watching what happens to the Special Envoy for Monitoring and Combating Antisemitism.

Created during President George W. Bush’s administration, the position was vacant for much of Trump’s term. In 2019, he appointed Elan Carr, a former county prosecutor, to the post. Carr is widely respected in the Jewish community, but critics say he failed to leave a major mark and often found his work subsumed by the Trump administration’s focus on support for Israel as a stand-in for combating hate.

A coalition of Jewish organizations led by the ADL have been calling for the envoy position to be elevated to an ambassadorship for years. The change would allow easier access to the Secretary of State and could draw a higher-profile advocate like Foxman, the former longtime head of the ADL, or Holocaust scholar Deborah Lipstadt, whose court battle against a Holocaust denier became a celebrated film in 2016.

More than 70 groups signed a 2018 letter calling on Congress to upgrade the envoy position and there are currently bills pending in Congress to make it happen.

Asked about whether he would be interested in the role, Foxman said: “When that bridge is presented we’ll think about crossing it.”

Lipstadt, a professor at Emory University who is also a member of the Forward Association and a contributing columnist, did not respond to requests for an interview.

In addition to individual appointments, many of those closely watching the incoming administration hope for what they call a “whole-of-government” approach.

Scott Lasensky, who served as a senior policy advisor on Israel and Jewish affairs during the Obama administration, said that while “efforts to combat antisemitism have increased at the federal level” over the past 10 to 15 years, “they’ve tended to be heavily siloed.”

He said that, for example, officials overseeing the State Department’s focus on global antisemitism could work more closely with the Department of Homeland Security’s community-security program to identify common threats or areas where they could collaborate.

Stern, the Bard hate center director, noted that Trump will continue to have significant influence — and likely continue to promote divisive rhetoric on Twitter and off — after he leaves office, but said that a new approach from the Biden administration could help counter the influence of this.

“Trump is still going to stoke these things up after January 20,” Stern said. “But you always want to have leadership that has the opposite message.”

Here’s how experts say Joe Biden should respond to the past four years of rising antisemitism.