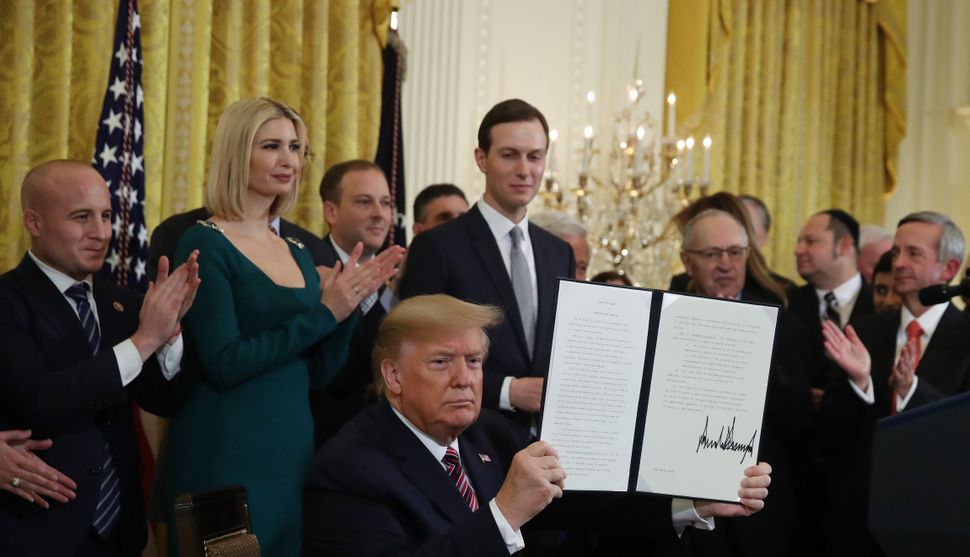 A Jewish writer I know told me he came home the day President Trump’s executive order about anti-Semitism on college campuses was published and told his wife, “I hate it.”

When she asked why, my friend said, “I don’t know.”

At least he admitted it. Much of the Jewish world was so busy condemning or celebrating Trump’s surprise move in the first hours after the news broke that they failed to grapple with its complexity.

It’s complicated because universities have to at once be the ultimate bastions of free speech even of the ugliest variety — and be a space devoid of discrimination where students of all types feel safe to learn, explore their identities and challenge their beliefs.

It’s complicated because Trump has such a suspicious record on anti-Semitism; less than 72 hours before the White House Hanukkah Party where the order was unveiled, he was trafficking in its tropes, with stereotyped generalizations about Jews and money.

And it’s complicated because Jewishness is complicated. It’s a religion, sure, but also a people. A cultural identity. A community. A nation in the ancient sense of the word, if perhaps not a nationality in the modern one.

We are not exactly parallel to other ethnicities rooted in immigration, like Irish- or Italian-Americans, since our forebears came from so many corners of the world. And we are not analogous to the racial groups in the United States census since our members span them. But we are also not like Christians or Buddhists or Hindus whose connection to one another is mainly their faith; indeed, less than a third of us belong to a synagogue at any point in our lifetimes, and some studies suggest more than half of us don’t believe in God.

We are, as we often say, members of a tribe. And it is a tribe that is increasingly under attack.

Violent attacks, especially in Orthodox neighborhoods in Brooklyn and, last week, Jersey City. Vandalism attacks, including three swastikas found recently at the high school in my suburban town, Montclair, N.J., supposedly a haven of diversity and tolerance. Verbal attacks, especially on college campuses, where legitimate, serious criticism of Israel’s occupation of the West Bank and violations of Palestinian human rights seem to keep spiraling into dangerous, discriminatory treatment of Israelis, Zionists and, sometimes, Jews in general.

Jewish students and groups have been shunned from civil rights coalitions. They have been pressured to sign pledges supporting Palestinians in order to participate in certain activities. One female undergraduate said that speaking her native Hebrew on campus garnered a catcall of, “You kill Muslim babies.” This is not O.K.

Trump’s executive order purports to address this pernicious problem by defining Jews as eligible for protection under Title VI of the 1964 Civil Rights Act. Religion is not a delineated category in the act, only race, color or national origin. The executive order basically says that if a Jew is being discriminated against in the way that people are discriminated against for race, color or national origin — in other words, for being a member of the tribe — it counts. It says anti-Semitism should not be tolerated, and I agree.

It also cites the International Holocaust Remembrance Alliance’s working definition of anti-Semitism, which says anti-Zionism can be but is not inherently anti-Semitic; it’s fine if it is “similar to criticism leveled at any other country.” Many critics of the order seemed to be ignoring that last part as they worried that the whole point was to quash anti-Israel voices.

At the Reform movement’s biennial gathering in Chicago last week, there was a lot of talk in this regard, especially at a reception for a triumvirate of groups that calls itself the Progressive Israel Network. One of the groups is Tru’ah, a coalition of rabbis focused on human rights, and one of those rabbis said that his problem with the order was that Trump seemed to be singling out certain kinds of anti-Semitism — the kind that springs from the anti-Zionist left — for attention. This is, after all, the same president who said there were “fine people on both sides” in Charlottesville, where white supremacists chanted “Jews will not replace us.”

Still, it seemed like this rabbi was doing the same kind of singling out, saying that blacks and Latinos deserved protection on college campuses, but not Jews. I mentioned that, and he pointed out that when the Obama Administration made a similar move through its education department, it listed Muslims and Sikhs alongside Jews as eligible for protection when treated as a race.

I don’t believe all anti-Zionism is anti-Semitic, and I share the concern that Trump’s real goal here is for harsh criticism of Israel, or maybe all criticism of Israel, to be silenced. But I also trust the leaders of our great universities, where the First Amendment is always first, to err on the side of protecting speech.

I think they need some help holding the line.

The Anti-Defamation League, whose chief Jonathan Greenblatt worked in the Obama administration and has condemned many a Trump move, praised the order last week for giving “law enforcement and campus officials an important additional tool to help identify and fight this pernicious hate.”

That’s why I don’t hate the executive order. Because like Greenblatt, and the vast majority of American Jews, I’m deeply worried about anti-Semitism on college campuses. We need more tools to combat it. Just don’t use them bluntly.