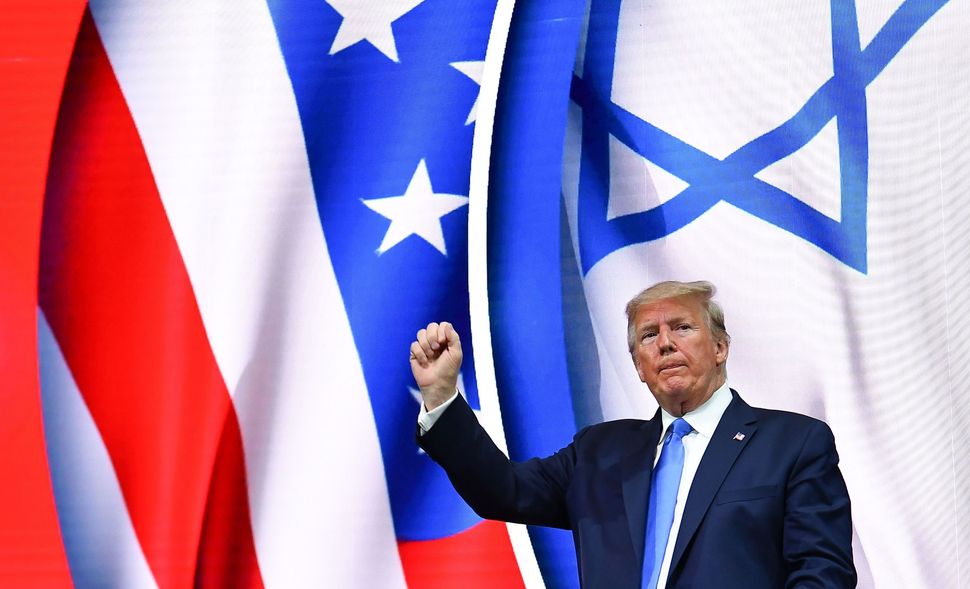 US President Donald Trump stands on stage after his address to the Israeli American Council National Summit 2019 at the Diplomat Beach Resort in Hollywood, Florida on December 7, 2019. Image by Getty Images

On Saturday night, President Trump delivered a speech to a room full of more than 4,000 Jewish supporters, at the Israeli American Council in Florida. In this speech, he trafficked in classical right-wing anti-Semitic stereotypes, including claiming that Jews vote only based on their wealth, and calling many of the Jews assembled “brutal killers.”

More significantly, he also claimed that many American Jews are insufficiently supportive of Israel, saying, “You have people that are Jewish people that are great people, they don’t love Israel enough.”

That was the anti-Semitic action. The supposedly pro-Jewish action came on Wednesday, when President Trump signed an executive order targeting what he perceives to be anti-Semitism on American college and university campuses. The executive order threatens to withhold federal money from universities that do not do enough to combat supposed discrimination against Jews on campus.

This is all true, and the problems with the definition of anti-Semitism adopted by Trump’s executive order would be reason enough to oppose the order. Yet in addition to the threat to Palestinian identity in the United States, the executive order also potentially threatens American Jewish belonging. It empowers the US government to consider Jewish identity not only as a religion, but potentially as part of a Jewish person’s “race, color, or national origin.”

President Trump’s executive order invokes the legal authority of the US Education Department under Title VI of the Civil Rights Act of 1964, which empowers the government to withhold funding from any educational institution that discriminates “on the ground of race, color, or national origin.”

For this executive order to be enforced, the Education Department will have to officially adjudicate the question of what Jewish identity even is, and when discrimination against Jews may be based on the idea that Jews are a race or a national origin, and not merely a religion -– a core belief of the white supremacists whom Trump called “very fine people.”

In light of his executive order giving the US government the authority to consider the question of when Jewish identity might constitute a “national origin,” President Trump’s dual loyalty allegations that American Jews ought to be more loyal to the nation of Israel are more understandable. Trump, who has accused the majority of American Jews of being disloyal to Israel on multiple occasions in the past, believes that American Jews are not really Americans, but Israelis living in a different country.

This is why he has in the past stood before rooms of American Jews and called Israel “your country,” and called Netanyahu “your Prime Minister.”

Donald Trump seems to conflate Jewish people with Israelis in his address to the Republican Jewish Coalition in Las Vegas.

The American Jewish Committee has criticised the US president over the remark, adding that his words could “feed bigotry” https://t.co/NYWwF1xUSZ pic.twitter.com/5k4rhkO26C

President Trump believes that American Jews have an obligation to support the nation-state of Israel, because he fundamentally believes that Israel is our nation, and that we are only temporarily living in the United States.

For President Trump, Judaism, a rich cultural and religious identity that crosses national borders and confounds modern categories of religion, ethnicity, culture, and nationality, can be interpreted by the US government as a “race” or “national origin.”

Everything Trump has said about Jews, and how Israel is our country and Netanyahu is our Prime Minister, indicates that he fundamentally sees us as a national group.

It should go without saying that giving a president who thinks American Jews are “disloyal” to our nation of Israel the authority to decide when Jews constitute a national origin, when a race, and when a religion, even for the supposed purposes of protecting us from discrimination, is bad for the Jews.

The question of when Jewish identity is a religion and when it is a national origin, and when governments should have the right to adjudicate this question, has a long and sordid history among anti-Semites, which makes it particularly ironic that some Jewish groups are embracing the Education Department’s actions in the name of supporting Israel and Zionism on campus. That is precisely why it is so dangerous for American Jews that the United States government is now claiming the right to make this decision on a case-by-case basis, even for the purposes of enforcing a supposed anti-discrimination order.

Now that President Trump is facing the prospect of impeachment, many of his defenders are trying to undermine the credibility of the many Jewish players in the impeachment saga by suggesting that their Jewish national origin means they are not loyal to the United States. Thus Fox News host Tucker Carlson alleged that Lt. Col. Alexander Vindman, who testified against Trump, has dual loyalties, a charge echoed by numerous other Republican operatives.

At a time when anti-Semitic dual loyalty allegations are again rearing their head, does anyone think that the US government claiming the right to determine when the Jews constitute a national origin and when a religion will be good for the Jews? Does anyone think that Trump would hesitate to turn this authority against Jews he perceives as disloyal?

So on the surface, President Trump did something anti-Semitic this past week, and something that his defenders will no doubt claim is good for the Jews. But in truth, both of these actions represent the same anti-Semitic belief: the belief that the US government should have the right to adjudicate Jewish identity.

When Trump repeatedly claims that American Jews ought to be more loyal to Israel, he is really saying that he thinks we’re Israelis first and Americans second. This belief is in line with an executive order that gives the government the power to determine when Jewishness may constitute a “national origin.” And that cannot be good for the Jews.

Joel Swanson is a Ph.D. student at the University of Chicago, studying modern Jewish intellectual history and the philosophy of religions. After all this time of studying Jewish culture, he still doesn’t know if Judaism is a religion, a nation, or something else entirely. Find him on Twitter at @jh_swanson.