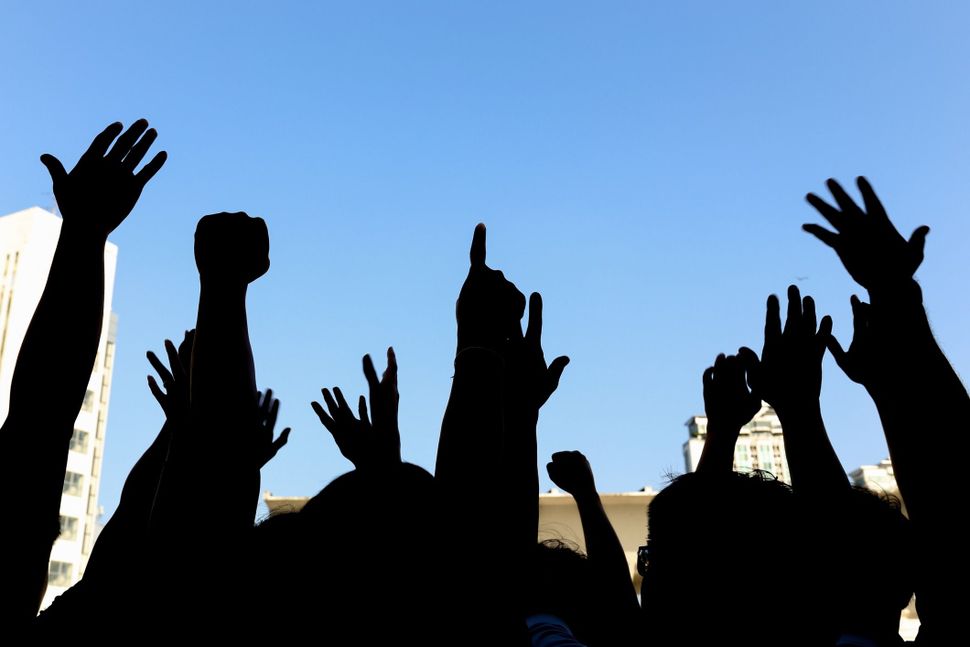 Last week, American Jews found themselves defending their loyalty to the U.S. after President Trump said that Jews who vote for Democrats display “either a total lack of knowledge or great disloyalty.” By contrasting the Jewish people in Israel, who “love him” with American Jews, who “don’t know him or like him” and who “don’t even know what they’re doing or saying anymore,” Trump’s words and subsequent tweets implicitly established a hierarchy of Jews, where the “good Jews” live in Israel and support the policies of President Trump, while the bad diaspora Jews are too foolish and disloyal to know what is best for their people.

The reaction from the Jewish community was swift and furious, with organizations ranging from the Anti-Defamation League to the American Jewish Committee criticizing the president for invoking the historical specter of Jewish disloyalty. (The Republican Jewish Coalition, which engaged in some wild hermeneutics to claim that President Trump was not actually saying what he in fact said, stands as a notable exception.)

The responses shared a common theme: an emphasis on Jewish loyalty to the United States. Take, for example, the Zioness movement, which calls itself “unabashedly progressive” and “unapologetically Zionist.” In multiple posts on Twitter, Zioness chose to highlight Jews who have served the United States military, and therefore have proven their loyalty to the US.

Similarly, David Harris, the CEO of the American Jewish Committee, wrote that Jews are loyal participants in the US political process, with some choosing to vote Democratic and others choosing to vote Republican.

There’s only one problem: Where does that leave Jews who don’t support the US military at all, or who have politics to the left of both of the major US political parties? If Jewish loyalty is conditional on Jews supporting American institutions, being pro-military and having political views within the accepted bipartisan consensus, then acceptance of American Jews is always conditional. We’re allowed to remain here only as long as we remain good, loyal citizens.

The American Jewish community has been here before. Throughout the twentieth century, a strong cultural association between Jews and Communism meant that anti-Communist political movements often lapsed into outright anti-Semitism.

The association of ethnic Jewishness with Communism was so strong that it showed up in remarks by politicians as different as Adolf Hitler and Winston Churchill, while in Polish, there is even a single noun that means “Jewish Communism,” Żydokomuna.

The United States was by no means immune from this trend. In 1919, at the height of the first Red Scare, the highly respected dean of the Columbia University School of Journalism published the Protocols of the Elders of Zion in the “Public Ledger” in the form of an exposé about the dangers of Communism. Henry Ford credited this publication and its influence in awakening him to the dangers of Jewish Communism with his decision to print his notoriously anti-Semitic tract “The International Jew” in The Dearborn Independent the following year. (Baldur von Schirach, head of the Hitler youth from 1931 to 1940, in turn said of Henry Ford’s tract that, “I read it and became anti-Semitic.”)

During the second Red Scare of the 1950’s, a survey by the American Jewish Committee found that more than half of Americans associated Jews with spying on the US on behalf of the Soviet Union. Out of 124 people questioned by Senator Joseph McCarthy’s notorious Senate Committee on Homeland Security and Government Affairs in 1952, a whopping 79 of them, fully two-thirds, were Jewish.

Congressman John Rankin, a founder of the House Un-American Activities Committee (HUAC) and a stalwart supporter of McCarthyism, gave a speech on the floor of the House of Representatives in which he did little more than list Jews who he suspected of being Communists, going so far as to accuse them of changing their names to hide their Jewish identities. (A sample: “One Communist wrote a letter which began, “Dear Kike.” Meanwhile, those Senators most vocally opposed to McCarthy and his methods reported receiving letters accusing them of being “crackpots fronting for the Jews.”

During both American red scares, the response of the organized Jewish community was not to stand up for Jewish Communists as fellow members of the Jewish community, but rather to throw leftist Jews under the bus, to insist that Jewish leftists were simply a noisy minority and that most Jews were good, loyal Americans.

On April 17, 1920, the Anti-Defamation League circulated to five hundred newspapers around the US a series of articles by Jewish anti-Communist writer Isaac Don Levine, arguing that most Jews were in fact anti-Communist. The American Jewish Committee issued a statement declaring that American Jews had no sympathy for Communism, while prominent American Rabbi Stephen S. Wise claimed that Jewish Communists were “renegade Jews.” Jewish leaders with good, respectable centrist liberal politics consistently argued that Jewish radicals were not truly Jews.

The organized Jewish response during the second Red Scare was similar. Historian Aviva Weingarten reports that during the McCarthy era, the American Jewish Committee and the Anti-Defamation League “endeavoured to banish communists from the ranks of the Jewish community and its offices” in order to combat public associations between Jewishness and leftism; the American Jewish Committee also financed and promoted the spread of anti-Communist literature. The American Jewish Congress expelled the leftist Jewish People’s Fraternal Order in 1949, ultimately leading to the latter organization having to shut down. And in the early 1950’s, organizations including the ADL and the AJC invested in a large publicity campaign designed to promote the image of the American Jew as a loyal, patriotic American citizen; the groups even discussed approaching Paramount Pictures to produce a movie in which a Jewish American spy agent exposes and fights international Communism.

Then, as now, the message was clear: American Jews are worthy of rights because we’re loyal Americans committed to the principles of American democracy. We were never really Communist subversives at all.

There was only one problem with that message: It wasn’t entirely true. Most Jews were never Communists, but as historian Tony Michels reports, Jews truly were disproportionately represented in leftist groups in the late nineteenth and early twentieth century. Between 1914 and 1920, the predominantly Jewish voting districts in New York elected “ten state assemblymen, seven city councilmen, one municipal judge, and one congressman on the Socialist Party ticket.”

In 1914, at the dawn of World War I, the Jewish Socialist Federation had 14,000 members out of about 94,000 members of the Socialist Party of America nationally — meaning Jews comprised fully 15% of the members of the Socialist Party, far out of proportion to their total representation in the US population at the time. For reasons which have been debated for decades, Jews truly were disproportionately likely to sympathize with leftist ideas.

And by responding to charges of Jewish Communism during the Red Scares by asserting that Jews really were loyal Americans, with good, respectable centrist politics, the organized Jewish community sacrificed these Jewish leftists on the altar of respectability politics. Jews were worthy of being full citizens of the US because we had the right, respectable politics.

The implication was that Jewish citizenship and belonging was always conditional, never absolute. Jews were worthy of American citizenship insofar as they could prove their loyalty to the United States, so that, as historian Bat-Ami Zucker argues, American Jews were forced to “prove their devotion to America often by exaggerating their patriotism.”

And now the American Jewish community is on the verge of repeating the same mistake. If we respond to Trump’s scurrilous allegations of disloyalty by emphasizing that we truly are good, loyal Americans, who serve in the military and vote for respectable parties in the mainstream of American political culture, then we run the risk of tossing members of our community under the bus.

Moreover, if American Jews are loyal Americans because we serve in the US military, what does that means for other communities of minorities in the US, such as Muslim Americans, who are disproportionately likely to oppose militarism? If American Jews define our status as loyal Americans as contingent upon our service in the US military, we throw our Muslim sisters and brothers under the bus at a time when rising white nationalism is resulting in more violent hate crimes against both Muslims and Jews, and Muslim-Jewish solidarity is therefore needed more than ever.

There’s a better way forward. We don’t have to argue for American Jewish belonging in the United States because we are loyal Americans. We don’t have to make American Jewish citizenship contingent upon holding respectable politics, and therefore make it conditional. We can draw upon our long tradition of Jewish resistance to unjust governments and solidarity with the marginalized. We can insist that we belong in the United States not because we have the proper politics, but because no American should ever have to prove that they belong here.

Let’s show Trump that he’s wrong to create a hierarchy of good Israeli Jews and bad diaspora Jews. This time let’s be proudly disloyal Jews, and in the process show that there are higher loyalties than nation-states.

Joel Swanson is a Ph.D. student at the University of Chicago, studying modern Jewish intellectual history and the philosophy of religions. He isn’t loyal to either the US or to Israel, so you might say he has dual disloyalty. Find him on Twitter at @jh_swanson.