President Trump: This Jewish College Student Thanks You 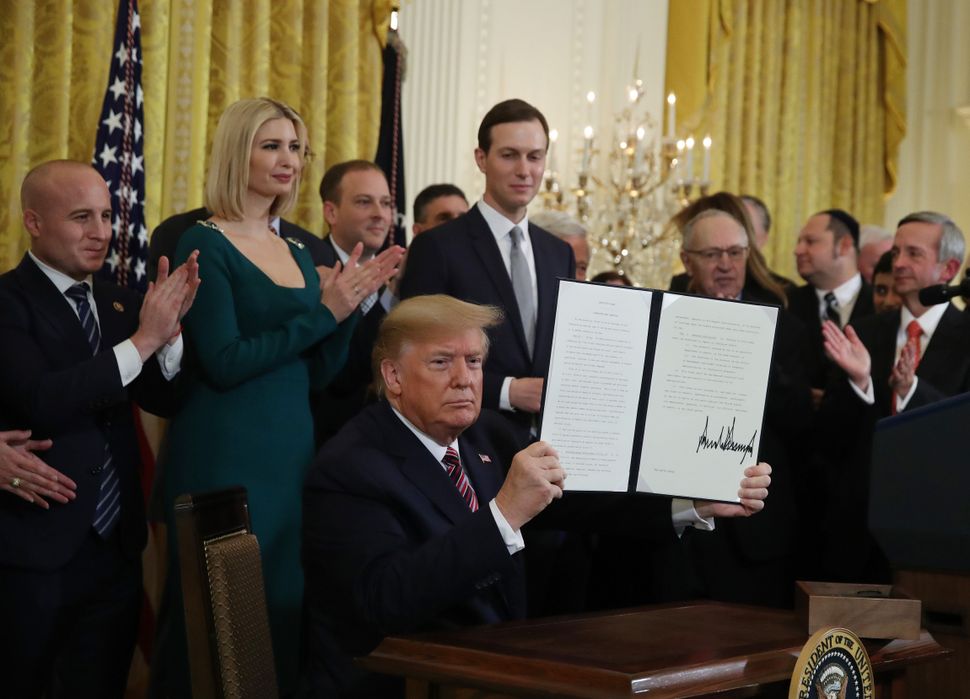 Ivanka Trump, US President Donald Trump, and others listen while Senior Advisor Jared Kushner speaks during a Hanukkah reception in the East Room of the White House December 11, 2019, in Washington, DC. Image by Getty Images

After another apparent anti-Semitic attack, this time at a kosher supermarket in Jersey City on Tuesday, a glimmer of hope shone through for the American-Jewish community.

In the run up to the White House’s annual Hanukkah party on Wednesday, President Trump signed the Executive Order on Combatting anti-Semitism. The order reads: “It shall be the policy of the executive branch to enforce Title VI against prohibited forms of discrimination rooted in anti-Semitism as vigorously as against all other forms of discrimination prohibited by Title VI.”

As a Jewish college student who has faced anti-Semitism on my campus and does not agree with many of President Trump’s decisions, I welcome and am grateful for this action.

Title VI of the Civil Rights Act of 1964 “prohibits discrimination on the basis of race, color, and national origin in programs and activities receiving federal financial assistance.” This includes universities. Wednesday’s executive order would extend such protections to Jewish students, when they are being discriminated against on the actual or perceived basis of race, color, or national origin.

This executive order finally protects Jewish college students like myself, who have been targeted and discriminated against not only for being Jewish, but for believing that the world’s sole Jewish state has a right to exist.

The order, which has been endorsed by the Anti-Defamation League, requires that agencies enforcing Title VI consider the International Holocaust Remembrance Alliance definition of anti-Semitism. This definition includes “drawing comparisons of contemporary Israeli policy to that of the Nazis” and “denying the Jewish people their right to self-determination, e.g., by claiming that the existence of a State of Israel is a racist endeavor.”

Twenty countries, including France, Canada, Germany, and the Netherlands, have already officially adopted this definition of anti-Semitism. It has been long past due for the United States to extend the IHRA definition into law, and this is a first and vital step in doing so.

It is worth discussing briefly what this executive order does not do. It does not inhibit free speech on campus, including criticism of Israel or its policies. Indeed, the order states that in its enforcement, “agencies shall not diminish or infringe upon any right protected under federal law or under the First Amendment.”

Nor does the order redefine Judaism as a nationality instead of a religion, as early media reports incorrectly stated. In fact, for those who believe that anti-Semitism should not be tolerated on campuses, there should be nothing controversial in this executive order.

Jewish students across the country face anti-Semitism. This Hanukkah, as I remember and celebrate the resilience of the Jewish spirit, I will be thankful that this small yet important step has been taken to protect Jewish students around the country.

Josh Eibelman is a senior at Cornell University and a freelance writer.

President Trump: This Jewish College Student Thanks You