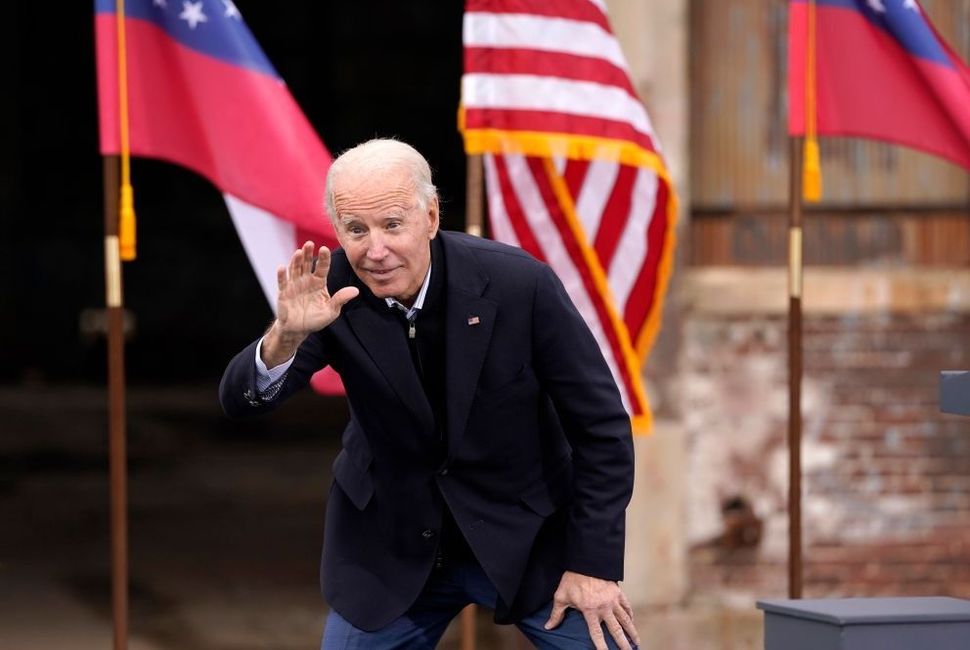 U.S. President-elect Joe Biden gestures to the crowd as he delivers remarks during a drive-in rally for U.S. Senate candidates Jon Ossoff and Rev. Raphael Warnock at Pullman Yard in Atlanta, Georgia. Image by Getty Images

Most progressives do a delicate dance each time President-elect Joe Biden considers a slate of moderates for a cabinet job, trying to nudge him to the left without alienating the coming administration.

But not Jeff Hauser, who is brawling, not waltzing, his way through the transition and relishes the opportunity to take the heat for his allies on the left.

“We don’t have a need for face time with Biden world,” said Hauser, founder and director of the Revolving Door Project. “Other organizations welcome our candor because it absolves them of the need to strain important relationships.”

Hauser has become the spokesperson for progressive discontent with the Biden administration-in-waiting — popping up everywhere from the Washington Post to the Credit Union Times.

The 46-year-old operative mixes his legal background and political experience to keep an eye on key roles that normally fly under the radar — Office of Information and Regulatory Affairs, anyone? — and calls attention to potential picks who don’t pass progressive muster. His pugnacious style annoys some of his fellow Democrats, but he’s OK with that.

The Revolving Door Project takes a broad view of its namesake term, which usually refers specifically to lobbyists cycling in and out of government. Hauser and his staff of eight are focused on opposing executive branch nominees who would work to “entrench corporate power or seek personal advancement.”

In practice, that means opposing government appointments for those who work for, or lead, corporations with track records that give progressives ulcers, whether or not the potential nominees are technically lobbyists.

He criticized Biden’s appointment of Jeff Zients as COVID-19 czar, for example, based on Zients’ alleged coziness with the health care industry.

Hauser’s logic works like this: taking a job on Wall Street or in Silicon Valley doesn’t make someone a bad person. It just gives them conflicts of interest: They’ll struggle to regulate, much less crack down on, their former employers.

“You lose the distance,” Hauser said. “People are really loath to be like, ‘Yeah I worked there but now we need to blow that place up — only an asshole would work there!’”

Hauser, for the record, doesn’t think that only assholes work for these corporations — but he does think watchdogs like him need to closely review their motives, and possibly try to block them from going into government.

Indeed, he knows such people, having followed an early career path similar to that of many he now assails as unfit to serve in the administration. After earning an undergraduate degree from Harvard and finishing law school at NYU in 2001, Hauser became a staff attorney at the Justice Department working on antitrust regulations.

He said that even public service-minded Ivy League graduates often chafe at seeing their former classmates rake in money. When Democrats lose elections many of these political appointees see an easy way to line their own pockets as lobbyists or in the private sector.

“The intent is to play catch up when your party is out of power,” Hauser said. “The phrase is, ‘And then I did this to make some money.’”

Hauser said that despite his many flaws, he has been relatively immune from the desire to, well, make some money. After two years at the Justice Department, he briefly worked on retired Army General Wesley Clark’s doomed presidential bid in 2004 before becoming political director of the National Jewish Democratic Council.

At the time, the Jewish group was fighting back against GOP strategist Karl Rove’s largely unsuccessful bid to peel off Jewish voters in swing states.

Hauser, who lives with his wife and 7-year-old son in Washington, D.C., said his connection with the underdog is central to his Jewish identity and political work.

“Being Jewish,” Hauser said, “is integral to my fear of accumulations of power, awareness of how fascism rises and the need to fight against it, and how corrosive excessive cynicism and inattention to the truth can be.”

Hauser would go on to work for a series of progressive groups, most notably MoveOn.org and the AFL-CIO labor union, before starting the Revolving Door Project at the Center for Economic and Policy Research in 2015.

The project was originally intended to pressure Hillary Clinton to make progressive appointments after her anticipated victory. When she lost, Revolving Door began pressuring Democrats in Congress.

Since Biden’s victory, Hauser’s rise from relative obscurity has drawn the ire of some mainstream Democrats.

“While Democrats spent the past four years organizing to beat Donald Trump, Jeff was instead out there doing opposition research on potential Democratic appointees for a then-fictitious administration,” an anonymous Democratic operative told Politico.

The Washington Post editorial board assailed the Revolving Door Project’s opposition to Zients, for example, writing that, “We’re struggling to understand what’s wrong with pursuing worthy objectives in the most cost-effective manner.”

But Hauser doesn’t seem to mind the feathers he’s ruffling. And despite his frequent social media posts and op-eds assailing Biden’s proposed and announced nominees, Hauser isn’t actually despairing at what the next four years will bring. He said Biden had earned a “C” so far (compared to Trump’s “F.”)

“Biden prefers familiarity and experience and the last couple of Democratic administrations have skewed to the center-right of the Democratic Party so he’s choosing from within that universe,” Hauser said. “But I think he’ll listen when progressives are loud enough.”

News reporter Arno Rosenfeld can be reached at [email protected]