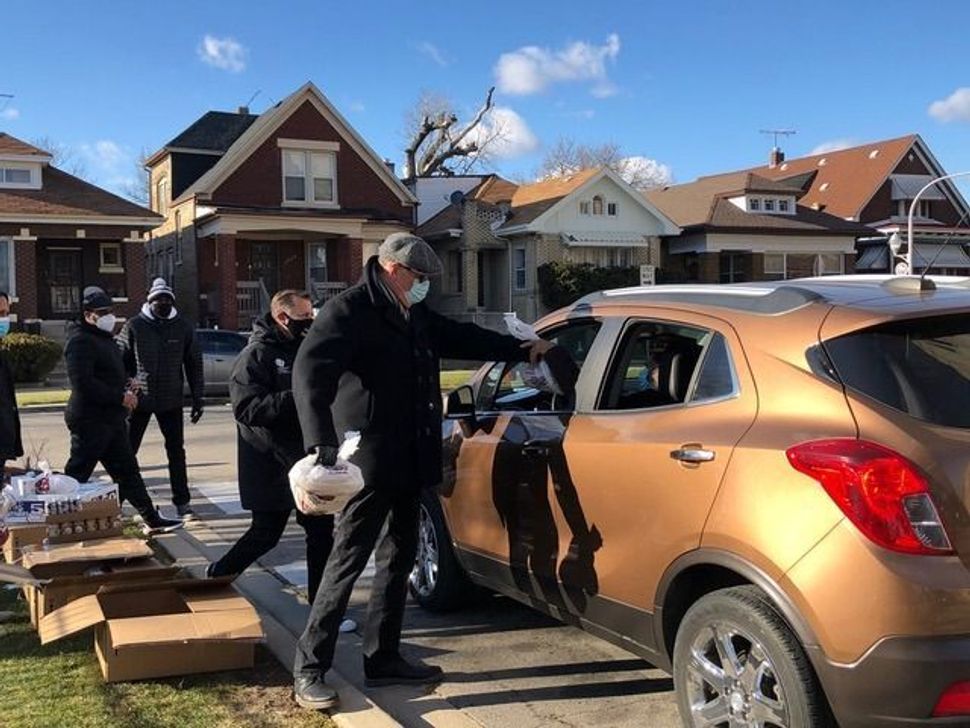 Tom Sondag wanted to help his favorite Chicago Jewish deli, Manny’s Deli, while also helping his friend, Catholic pastor Michael Pfleger of The Faith Community of Saint Sabina, feed residents on the South Side of Chicago.

Sondag, who owns the Castle Honda car dealership, bought 1,000 sandwiches, and on Monday, Dec. 21, stood with Pfleger at the Saint Sabina Church to hand bags of corned beef sandwiches to residents of Chicago’s Auburn Gresham neighborhood.

“Manny’s [Deli] was a treat for me as a kid and has always been a treat for me,” Sondag said. “I thought, let’s get these people some sandwiches for Christmas.” 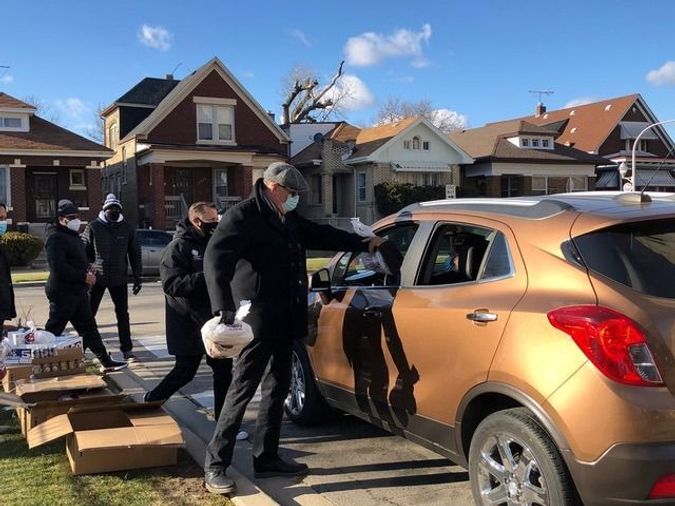 Dan Raskin, owner of Manny’s Deli, said Sondag had ordered about $30,000 worth of food. The deli opened a GoFundMe on March 21 with the goal of raising $18,000, symbolic of the Hebrew numerical value for “chai,” meaning, “life.” The goal was to use that money to purchase food from the deli to give to Chicago-area nonprofit organizations and first-responders.

The restaurant has raised over $38,000 through GoFundMe since, not including Sondag’s purchase. The money not only feeds the local community, but also helps the deli’s 42 employees maintain a steady income. The restaurant is still offering carryout and delivery options, but not indoor dining, which has been banned in Chicago since Oct. 30.

“One of my main goals was to make sure that all of my staff was working,” Raskin said. “In the beginning of the pandemic, we did cut a lot of hours, but for the last few months we’ve kept everyone who wanted to work full-time. It’s very important to me to keep everybody working and to keep them providing for their families.” 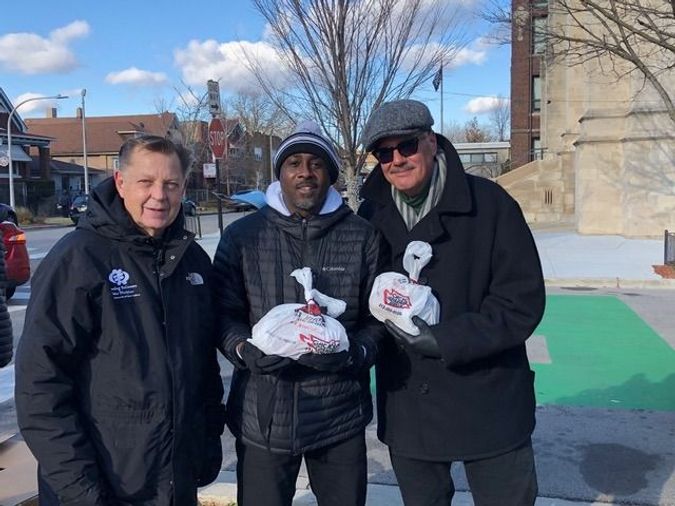 “Tom has been a supporter of ours and he called me up, saying, ‘Hey, I want to support you and I want to support Manny’s and that’s how it came about,’” Pfleger said. “I’ve known Dan for some time, he’s helped feed our seniors a couple of times.” 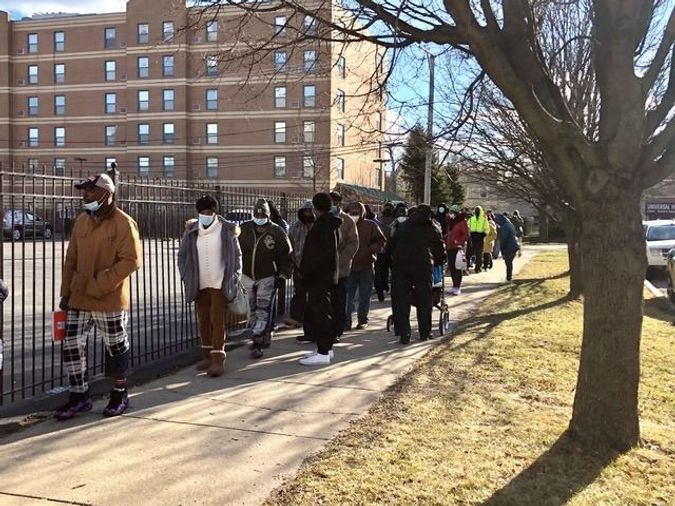 A line of people waits for Manny’s Deli sandwiches on Monday, Dec. 21, across the street from Saint Sabina Church in Chicago. The sandwiches, bought by local car dealership owner, Tom Sondag, were a Christmas gift to help those who suffer from food insecurity. Image by Leah Vann

Cars lined 78th Street, where, “Demand Justice,” was painted in red, yellow and green letters. The line of cars, which started forming at 9 a.m., stretched down Racine Ave all the way to 69th street. Another line of residents who didn’t have cars rounded the parking lot on the other side.

According to Census Reporter, Chicago’s south city, which includes neighborhoods such as, Auburn Gresham, Roseland, Chatham, Avalon Park and Burnside is 95.9% Black with 19.9% of its residents living below the poverty line. In the latest Bureau of Labor Statistics jobs report, the Black American unemployment rate in November was at 10.3%, while the national average is at 6.7%.

In addition to Manny’s delivery, the church hands out 500 meals from the United States Department of Agriculture every Thursday.

“I’ve been here at this church for 45 years, I’ve never seen as many people come to us for help like right now,” Pfleger said. 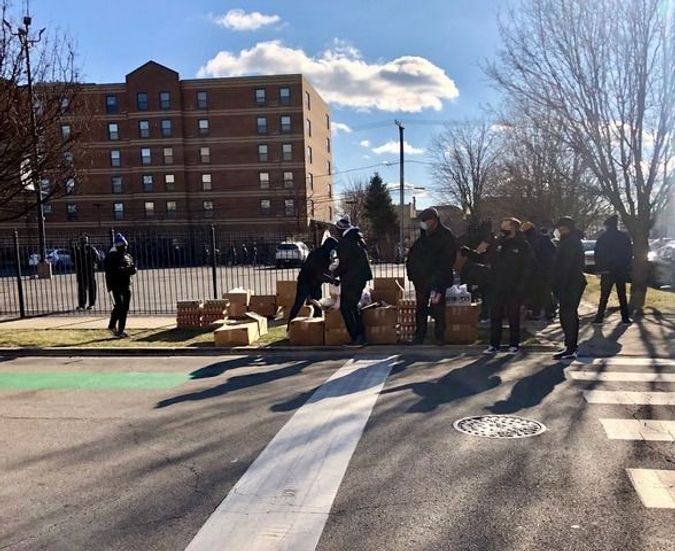 Phil Hunter, who works as the director of the employment resource center at Saint Sabina Church, said that even before this pandemic, the unemployment rate was above 20%.

“This may be their dinner for the day,” Hunter said. “On a daily basis, we see people looking for work or who have been displaced because of the pandemic. Especially with the Christmas season, they’re trying to provide Christmas for their kids and families, as well as put food on the table. ”

The event was a blending of cultures— members of a Catholic church were handing out Jewish deli food to a predominantly Black neighborhood of Chicago.

“That’s the most important part: Christians, Jews, Muslims, we all work together to help people,” Pfleger said. “That’s what it’s about.”