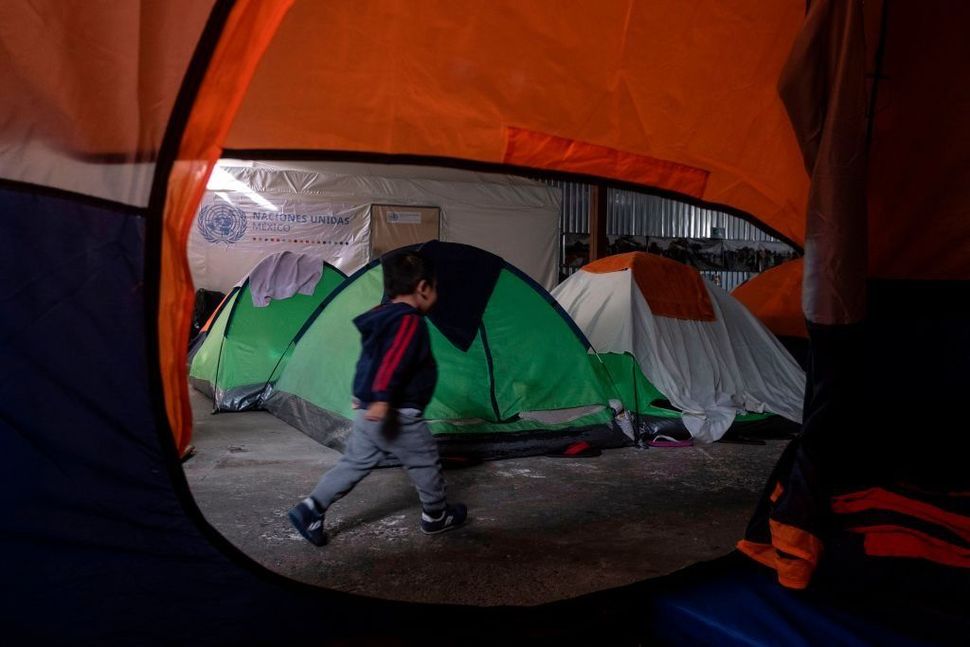 A migrant boy walks amid tents as seen from inside one, at the Juventud 2000 migrant shelter in Tijuana, Mexico this month. President-elect Joe Biden said he would not move swiftly to change the policies that have kept asylum seekers stuck in Mexico. Photo by Getty Images

After President-elect Joe Biden backed off his promise to quickly end the Trump administration’s border policies, saying current restrictions are necessary to deter large numbers of asylum seekers, Jewish groups who came together to fight those restrictions are re-emphasizing the importance of their mission.

“Biden needs to address the human rights abuses created by Trump policies with the same urgency with which Trump unleashed them,” said Alyssa Rubin, campaign director for Never Again Action, an activist group that came to prominence with a series of protests against Immigration and Customs Enforcement in the summer of 2019.

“The last thing we need is to say we’re going to stop immediately, the access to asylum, the way it’s being run now, and then end up with 2 million people on our border,” he said.

“Migrants and asylum seekers absolutely should not believe those in the region peddling the idea that the border will suddenly be fully open to process everyone on Day 1,” Susan Rice, who will oversee domestic policy for Biden, told EFE.

Biden, Rice and Jake Sullivan, whom Biden has named as his national security advisor, said that the new administration was committed to restoring the asylum process but that doing so will likely take several months.

Still, the early calls for patience regarding the callous treatment of migrants, a central issue for many Jews who opposed President Donald Trump, provoked frustration among some.

In an email, Rubin wrote that Trump signed three executive orders cracking down on immigration in his first week in office, and that repealing the current administration’s policies was “the bare minimum of what the Biden administration needs to do in order to transform our broken immigration system.”

The Jewish refugee aid organization HIAS was more measured in its response to Biden’s comments, but also called for swift action. Melanie Nezer, senior vice president for public affairs, said that Biden’s announcement “had us both breathing a sigh of relief and steeling ourselves for the challenges ahead.”

“Rebuilding a fair and humane asylum system from the wreckage of the Trump years will take time and a lot of hard work, but some significant changes must be made immediately to alleviate people’s suffering at our border,” Nezer said.

Many liberal Jewish Americans opposed Trump’s anti-immigrant policies after he took office. After Biden’s election, advocates expressed concern that they might struggle to exert similar levels of grassroots pressure on the new administration.

Biden and his team said they are still committed to some immediate actions after taking office. Rice said that Biden will send a bill to Congress on his first day as president proposing the creation of a legal path to citizenship for the estimated 11 million undocumented immigrants living in the United States. And Sullivan said the administration will seek to end agreements with Guatemala, El Salvador and Nicaragua that allowed the U.S. to force migrants who had passed through those countries to return there.

“We will be able to take some steps to change policies right away,” Rice said. “Others will take time to put in place, and the situation at the border will not transform overnight due in large part to the damage done over the last four years.”