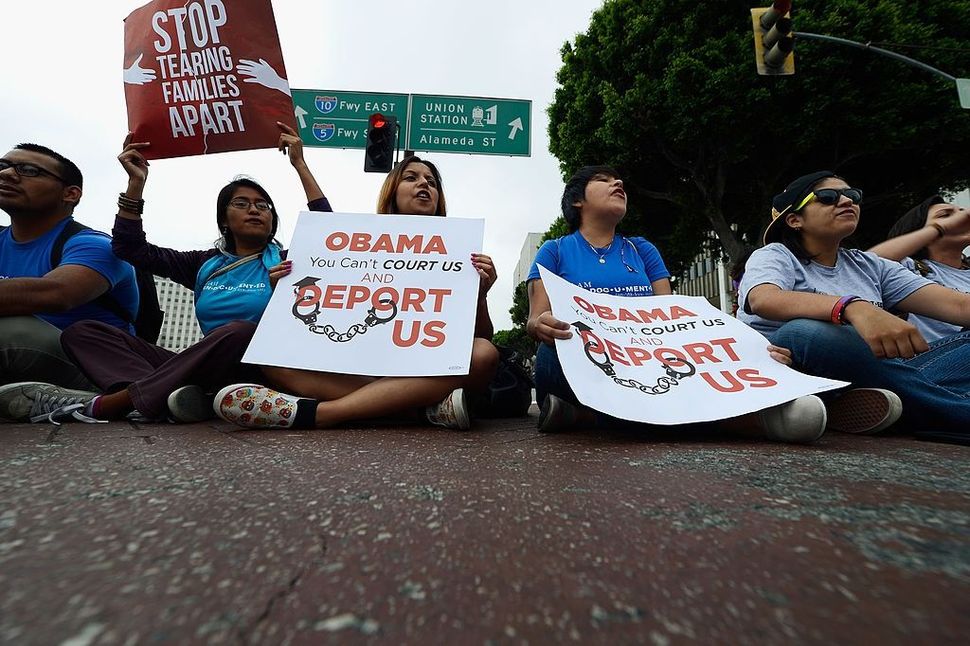 Students block a Los Angeles freeway as part of a demonstration against deportations in 2012, during President Barack Obama’s time in office. Some immigration advocates worry public support for more progressive immigration policies may die down after President-elect Joe Biden takes office. Image by Getty Images

Alain Mentha, co-chair of the New Jersey Jewish Coalition for Refugees, watched with dismay last week as the board of Hudson County voted to extend a contract to hold Immigration and Customs Enforcement detainees at the local jail. The board consists entirely of Democrats, many of whom had pledged to stop working with ICE during the Trump presidency, and yet it approved the extension in a 6-3 vote.

Mentha’s frustration with the vote mirrors the concerns of some immigration advocates across the country who were heartened by Joe Biden’s victory in the presidential election, but fear it may not be enough to reverse Trump-era policies — especially if the public pressure over the issue dies down.

“I’m very worried, to be honest,” Mentha said in an interview. “I don’t want to be cynical or pessimistic, but I think it’s fair to wonder whether our elected officials are going to become complacent or suffer from inertia.”

The Trump administration took more than 400 executive actions over the last four years to break apart and reconstruct the nation’s immigration system, the Migration Policy Institute said in a recent report.

Liberal Jewish groups mobilized in opposition to these changes, which included the practice of separating children from their parents at the Mexican border, and the decision to make asylum-seekers wait in Mexico for their court hearings. Many advocates are optimistic that President-elect Biden will follow through on his campaign promises to reverse these policies, but they also fear that a Democratic administration may not face the same scrutiny that turned arcane border and refugee policy into frontpage news over the last four years.

“There is that possibility that in January people feel like, ‘OK, everything is back to normal,’” said Melanie Nezer, a senior vice president at HIAS, the leading Jewish immigrant aid group. “We really have an opportunity here, but it won’t happen without intense pressure.”

Biden has pledged to resettle 125,000 refugees per year, more than in all but seven years since the program began in 1980 and well above average of 70,000 per year under President George W. Bush and 80,000 per year during the Obama administration. The ambitious goal would also be 10 times the 12,000 allowed to enter the United States during the past year. He has also committed to end the current policy requiring asylum-seekers to await their hearings in Mexico; restore the program that allows undocumented immigrants who arrived in the country as children to receive legal residence; and prioritize the deportation of people who have committed crimes unrelated to their immigration status.

But Nezer said the immigration system has been so thoroughly altered by Trump and his senior adviser, Stephen Miller, that it will take years to repair. In the case of refugees, for example, it could take State Department officials up to 18 months to identify and vet refugees overseas before reaching the promised number of admittees.

Mentha worries the new administration may have to effectively restart the program from scratch.

“If there’s nobody in the pipeline we’re not going to see any new refugees for a while,” said Mentha, who is also executive director of Welcome Home Jersey City, which provides support to refugees who resettle in the region.

Mentha said he fears that Biden may not prioritize immigration policy early in his term, as the country continues to grapple with a public health and economic crisis that could make Americans skeptical of allowing in foreigners.

“I’m very concerned that the climate as a whole isn’t very receptive,” he said.

Nezer said that interest in HIAS among Jews skyrocketed during Trump’s time in office, and that the organization had built a network for 450 synagogues across the country to support refugee resettlement.

Now she is hoping to maintain that momentum by emphasizing that the November election did not solve the various immigration issues — including expanded ICE raids across the country and the crackdown on asylum-seekers — that animated many Jews to become involved.

“The moment to push these things forward is when you have the memory of how harsh and inhumane the last four years were,” she said.

Eddie Chavez Calderon, a Jewish immigrant and activist in Arizona, agrees. Calderon was born in Mexico and is a so-called “Dreamer,” a recipient of the Deferred Action for Childhood Arrivals (DACA) program created during the Obama administration. But he pointed out that, “Obama and Biden deported more people than any other administration.”

“As an immigrant and formerly undocumented person I remember that,” Calderon, who works for the progressive Orthodox organization Uri L’Tzedek, said in a recent interview. “I remember losing family members to those deportations.”

He is worried that Jews may lose interest in immigration advocacy if the Biden administration maintains policies he considers problematic without the harsh rhetoric that often accompanied Trump’s crackdown.

“We have to hold our community accountable and say, ‘Look, when they were loud and vocal about the deportations and attacks on immigrant communities, you marched with me,’” Calderon said. “If it’s continuing but they aren’t as loud and vocal about it, we still still need to be out there protesting.”

It’s certainly not all doom and gloom for those active in the Jewish immimigration-rights world, most of whom are optimistic about the next four years. Several activists interviewed cited Biden’s nomination of Alejandro Mayorkas, who arrived in the United States as an infant, to serve as secretary of the Department of Homeland Security.

Mayorkas, who is on the board of HIAS, comes from a family of Cuban-Jewish refugees. He helped craft DACA while serving in the Obama administration and pledged after his nomination last week to protect “those who flee persecution in search of a better life for themselves and their loved ones.”

“It makes me feel elevated that this guy understands what it means to be an immigrant and go through these things,” he said.

(Immigrant-rights advocates were also heartened by Biden’s pick for secretary of state, Tony Blinken, who would oversee the refugee-resettlement program and has shared the moving story of his step-father’s rescue from the Nazis by American soldiers during World War II.)

Nezer, the HIAS leader, also made clear in an interview that the only reason there is concern about grassroots pressure over immigration policy dissipating is because the Biden administration is seen as a potential partner in addressing issues that were nonstarters with the Trump White House.

And given how much discretion presidents have over immigration policy, some advocates caution that the benefits of a sympathetic administration outweigh the risk that fewer members of the public may be paying attention once Biden takes office.

“I would rather have just and fair immigration policies,” said Kate Clark, who runs the immigration program at Jewish Family Service of San Diego, “and not be dealing with the rapid-fire abrasive, racist policies that have come under the Trump administration — even with the outcry — because these are people’s lives.”