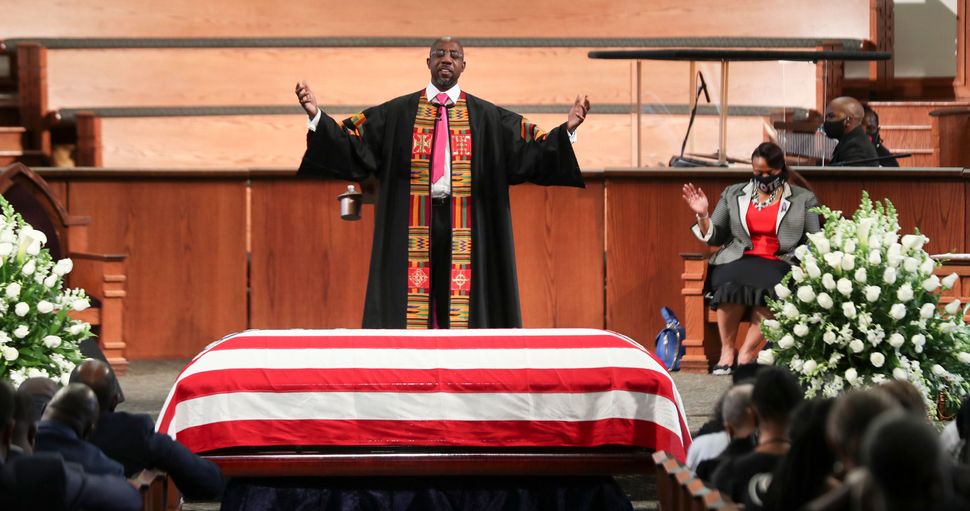 Turn on a TV in Georgia and you’re likely to see a clip pulled from one of the Rev. Raphael Warnock’s old sermons, painting him as a religious extremist.

Grainy footage shows him pumping his fist up and down at the podium of Atlanta’s Ebenezer Baptist Church. “Palestinian lives matter!” Warnock, the Democrat trying to oust U.S. Sen. Kelly Loeffler in a Jan. 5 runoff, intones in one attack ad produced by his opponents. “Nobody can serve God and the military,” he says in another.

If we don’t stop @ReverendWarnock, America will have its first Marxist U.S. Senator.

We MUST win on January 5th. pic.twitter.com/CW8IdYLSJh

But if you tuned into Ebenezer’s online services last Sunday, you’d have seen Reverend Warnock give a very different kind of homily. “I love the Christmas season,” Warnock said with a smile, echoing the cheerful, wholesome tone of his own political ads, where he describes how he loves puppies, or speed-wraps Christmas presents. “And one of my favorite things about this time of the year is the Christmas carols.”

In this intense runoff, where majority control of the Senate is at stake, Warnock’s thousands of hours of taped sermons have provided ample material for Loeffler and her allies to brand him as “radical Raphael.” But experts on the Black Church say that the attack ads are in some ways an assault on the treasured African-American institution itself, playing on the broader public’s lack of understanding of the way it weaves together politics and theology. 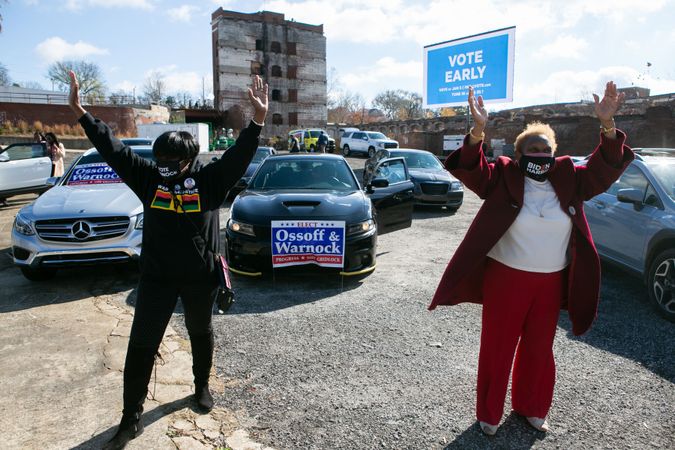 Gloria Tyson (L) and Gladys Ford (R) dance in front of their cars during a rally with Senate candidates Rev. Raphael Warnock and Jon Ossoff in Columbus, Georgia. Photo by Getty Images

The idea that religious leaders should follow in the footsteps of Biblical prophets to shake their congregants out of complacency has a long history. The white evangelical preachers who led the “Great Awakenings” in the early United States are one example, with their emphasis on personal morality and eventual opposition to slavery. Rabbis like Abraham Joshua Heschel, and others who were active in the civil rights movement of the 1960s, are another.

But this so-called prophetic voice is now most common in the Black Church, according to Robert Franklin, an ordained pastor and professor at Emory University. The voice runs through Warnock’s old sermons and those of other prominent Black preachers like the Rev. Jeremiah Wright, whose fiery rhetoric caused problems for his former congregant, Barack Obama, during his 2008 run for president.

“Black preachers think of themselves as standing in that unbroken line of prophets who speak truth to the state and speak to the people what God’s intent is,” Franklin said, “which is that people be treated with dignity and be given the chance to live a decent life.”

“Does the gospel mandate insist that the church organize its institutional life so as to address itself primarily to ‘the slavery of sin’ or to ‘the sin of slavery’?”

The disconnect between that perception of God’s intent and the daily lives of many Black people, who disproportionately suffer from poverty and other social ills, provides a foundation of moral outrage to the Black Church.

“The prophetic voice often goes to extremes in order to make the point, to get people’s attention,” Franklin explained. “You can lift one of those one of those out, which is what I see happening in many of these Republican ads, and I think: it’s too bad they’re missing a great sermon.”

For example, Loeffler distributed one clip on social media and to the press from a sermon in which Warnock tells the audience, “America needs to repent for its worship of whiteness.” In the 23-minute sermon, though, Warnock spoke about how many people have turned away from the idea that God created all humans equal by fetishizing wealth, power and “whiteness.” That nuance got lost in the attack. 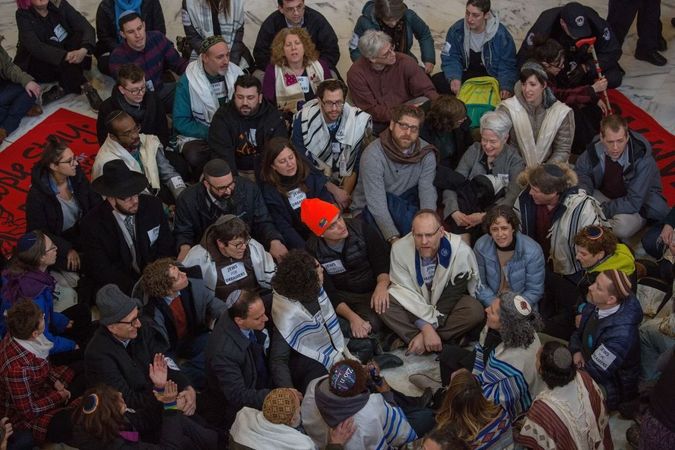 Jewish activists protesting for passage of a clean DACA bill stage a sit-in on Capitol Hill in 2018. Photo by Getty Images

Church leaders who seek to embody the prophetic voice are some of the most recognizable faces within Black politics. They include the Rev. Martin Luther King Jr., who preached as the same church where Warnock is now senior pastor; the Revs. Jesse Jackson and the Rev. Al Sharpton; and the late Rep. John Lewis, who was ordained as a Baptist minister long before he entered electoral politics.

The prominence of Black clergy in politics reflects the role churches play in the community. Black churches sprang up because mainstream churches excluded Black people, but they quickly became one of the main — and sometimes only — Black-controlled institutions in town.

Marc Dollinger, a Jewish studies professor at San Francisco State University, said that Jews have historically been able to separate their political lives from their religious lives because of the strong Jewish institutions that exist outside of the synagogue and the ability for white Jews to more seamlessly engage in secular political groups.

That hasn’t always been possible for Black Americans. During the 1950s and 1960s, for example, the NAACP was banned in several southern states, leaving Black churches as one of the only forums for political organizing.

“In the Black Church it all comes together: one’s religion, one’s race, one’s social life.”

“It’s a privilege to be able to compartmentalize parts of your life,” Dollinger said. “In the Black Church it all comes together: one’s religion, one’s race, one’s social life.”

Another factor that accounts for the difference in tone is the urgency with which the issues at hand impact congregants. Rabbis at liberal congregations might see social justice as core to their work, but the engagement for themselves and their congregants is generally as benevolent allies, whose values compel them to support others hurt by injustice — not people fighting for their own basic rights and urgent needs.

“We white people don’t fully appreciate the level of anger and despair about whether or not the United States is ever going to change,” said Cheryl Greenberg, a professor of African American history at Trinity College. “That fury is just palpable and has been for centuries.” 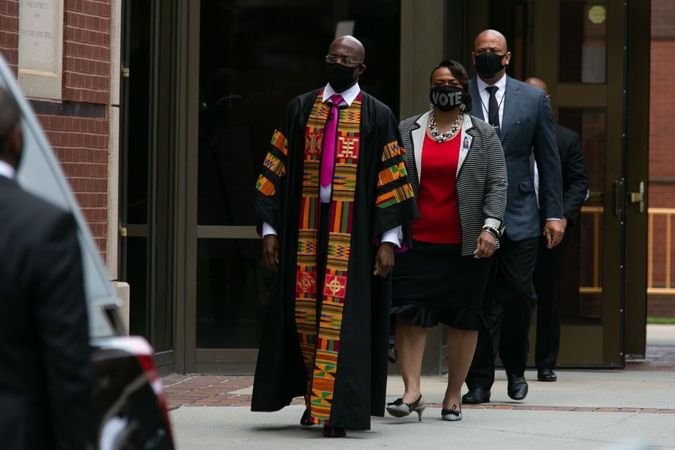 ‘Divided mind’ of the church

This is not to say that most Black churches are focused on politics. Congregations struggling to keep the lights on may not have the resources to run voter-education workshops, and many ministers are more comfortable discussing the relationship between individuals and God than the commandment for people to take care of one another.

And while the prophetic voice is widely accepted as part of the Black Church, many parishioners are seeking a sanctuary from the intense problems of poverty and injustice, where they can receive the energy to make through until next Sunday.

“It’s there for a psychological release,” said McDaniel, a professor of government at the University of Texas who specializes in the intersection of religion and politics. “If you bring in politics it’s going to be difficult for people who are already stressed out and want an escape to then deal with that.”

Warnock addressed this theological debate between saving souls and transforming society in an academic tome, “The Divided Mind of the Black Church,” which was well received at its 2013 release. He wrote that it was meant as a response to what he saw as the increasing influence of “uncritical” white evangelical Christianity and the “prosperity gospel,” which claims God financially rewards individuals for their faith.

“Does the gospel mandate insist that the church organize its institutional life so as to address itself primarily to ‘the slavery of sin’ or to ‘the sin of slavery’?” Warnock asked in the introduction.

For Warnock, the answer seems to be: both.

“The black church was born fighting for freedom, and freedom is indeed its only reason for being,” Warnock wrote. “But neither can black theology afford to marginalize the importance of personal piety.”

Warnock reimagined “Let It Snow” as a song about how faith can steel a believer against external adversity.

His message of loving Christmas carols and the deep meaning they contain stood in stark contrast to the sermon he delivered around the same time last year. In that 2019 sermon, before Warnock was a candidate for public office, Christmas carols were a jumping-off point for tying the birth of Jesus to a working-class awakening.

“You know, we say, ‘Silent night, holy night, all is calm, all is bright,’” Warnock told his church last December. “It’s a nice song. I like to sing it. But it ain’t quite accurate.”

All was not calm in Bethlehem, Warnock told his congregants. While the Roman elite were comfortable, “for a poor homeless couple trying to make a way out of no way, for ordinary working-class shepherds, all was not calm, all was not bright.”

That sermon was more in line with the theology Warnock argues for in his book, in which social action is central to religious instruction.

But the decision to steer away from a blatantly political reading of Christmas during the throes of a competitive political campaign is itself in line with a longstanding tradition.

Sermons and their underlying theology are full of righteous fury and aspirational hope, said Greenberg, the Trinity College professor, but when ministers like Warnock enter electoral politics they often do so as pragmatists — with policy positions and legislative goals that are far more moderate than their strident rhetoric from the pulpit.

“I don’t think it’s a contradiction so much as a recognition that until the coming of the Messiah, or the second coming, we may never see this,” said Greenberg, “but that doesn’t keep us from doing all we can to help the community that’s here right now.”