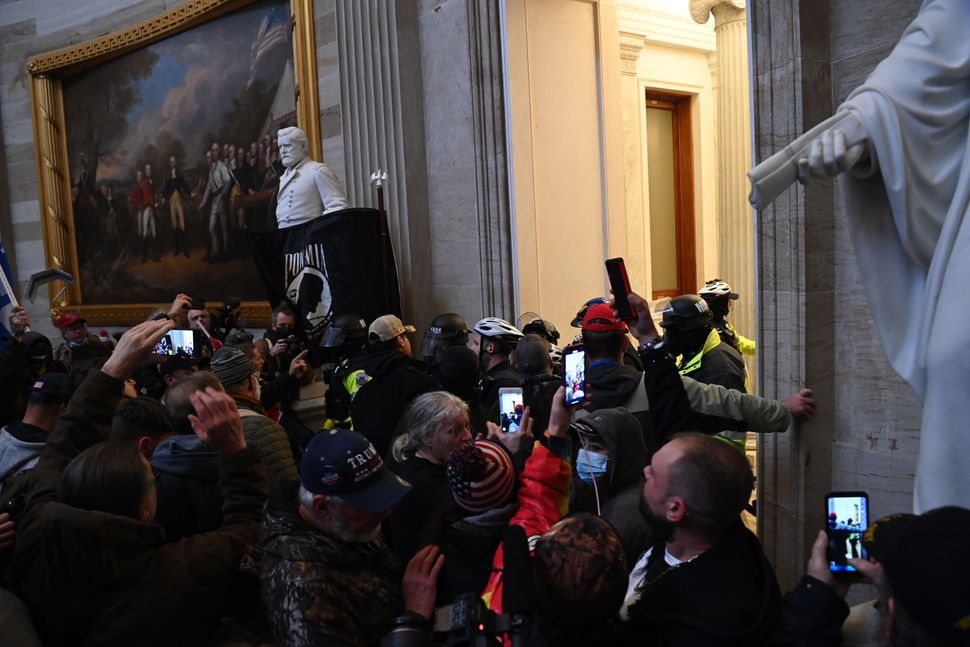 Supporters of US President Donald Trump protest in the US Capitol’s Rotunda Wednesday. Demonstrators breeched security and entered the Capitol as Congress debated the a 2020 presidential election Electoral Vote Certification. Photo by Getty Images

Updated: 4:59 pm EST. This is a breaking news story and will be updated as the situation develops.

The violent storming of the U.S. Capitol Wednesday by far-right protesters came after 36 hours of protests in D.C. that centered on antisemitic conspiracy theories, including QAnon, and claims that George Soros and other prominent Jewish Americans stole the presidential election from Donald Trump.

Far-right protesters broke through lines of federal police outside the Capitol and entered the building as a joint session of Congress convened inside to certify President-elect Joe Biden’s victory Wednesday. The violence followed a series of “Stop the Steal” protests in the city.

They were cheered on from the far-right corners of the internet, including in the chat of a livestream from inside the Capitol, with one person writing “OY VEY not anuddahshoahh,” a reference to the Shoah, or Holocaust. On 4chan, a photo of a law enforcement official in the Capitol was met with comments like “KILL ALL [N-word] AND COPS AND JEWS.”

The neo-Nazi website, The Daily Stormer, carried a livestream of the protest as demonstrations continued.

“In the American context, nothing like this has ever happened before.”

Rep. Elaine Luria, D-VA, a Jewish Navy veteran, said she was forced to evacuate her office after a pipe bomb was reported outside.

“I don’t recognize our country today and the members of Congress who have supported this anarchy do not deserve to represent their fellow Americans,” Luria said on Twitter.

The Republican Jewish Coalition called for protesters to stand down on social media.

“Protesters must stop now,” the RJC tweeted. “We support peaceful protest, but storming the halls of Congress and the Capitol building is unacceptable. We condemn these actions. G-d bless the @CapitolPolice.” 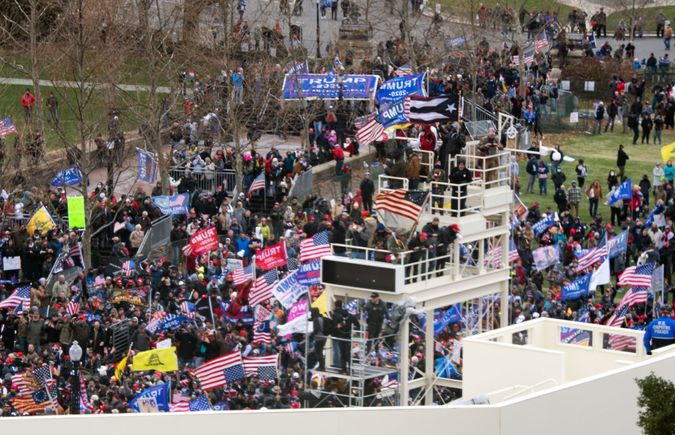 Supporters of US President Donald Trump take over stands set up for the presidential inauguration as they protest at the US Capitol Wednesday. Thousands of Trump supporters, fueled by his spurious claims of voter fraud, are flooding the nation’s capital protesting the expected certification of Joe Biden’s White House victory by the US Congress. Photo by Getty Images

Pro-Trump protesters originally arrived in D.C. Tuesday night to hear from a host of conspiracy theorists about the outcome of the presidential election.

“We are standing up against the evil globalists such as George Soros, who thinks he owns our politicians, who thinks he owns Chief Justice John Roberts on the Supreme Court,” one speaker, who appeared to be former Breitbart reporter Jennifer Lawrence, told a crowd at a rally Tuesday.

“Hitler was right on one thing: He said whoever has the youth has the future,” Miller told a crowd waving Trump flags.

Not a great look for a freshmen Congresswoman to be caught on tape at a rally in the Nation’s Capitol saying “Hitler was right.” @Miller_Congress

And for those who want to nitpick what she said, let me just stop you right there—Hitler was right on literally nothing. pic.twitter.com/KXbVT8jTr3

Protesters in D.C. blasted the song “Shadiley” from speakers — the artist’s name is P.E.P.E., a reference to the Pepe the Frog meme which is used on the internet to express affiliation with the far-right.

Twitter users claimed that the protesters, who wandered through the Capitol wondering aloud, “Where’s the Senate floor?” on a livestream, were set up by Democrats and George Soros to make Republicans look bad.

“Paid actors brought in by Soros,” said one user.

“Soros written all over it,” said another.

Jewish Twitter lit up with reports of Nazi flags and swastikas being seen in live video feeds from the Capitol. While the video most commonly shared as proof of such is ambiguous, another flag with far-right and pro-Nazi links can be clearly seen in pictures and video.

The green flag of the fictional nation of Kekistani is modeled as an homage to the Nazi flag with the letter K taking the place of swastikas and the color green substituted for the Third Reich’s telltale red. The flag initially emerged as a meme among 4Chan users but has made increasingly frequent appearances at real life rallies since 2017. According to the Southern Poverty Law Center, the flag’s name derives from a mock deity and an imagined nation of those who worship it.

The leader of the white supremacist group, the Groyper Army, Nick Fuentes, joined protesters in shouting “Christ is King” while the New Jersey European Heritage Association, another white supremacist organization, waved a flag early Wednesday, said the ADL in a press release.

Tim Gionet, known online as “Baked Alaska,” was one of the protesters present at the Capitol who was also livestreaming the insurgency. Before getting banned from Twitter for posting a photoshopped image of far-right agitator Laura Loomer, a Jew, in a gas chamber, Baked Alaska tweeted about how “Jews control the News,” and wrote to followers about being “JQ’d,” an abbreviation for the “Jewish Question,” meaning he had bought into antisemitic conspriacy theories. 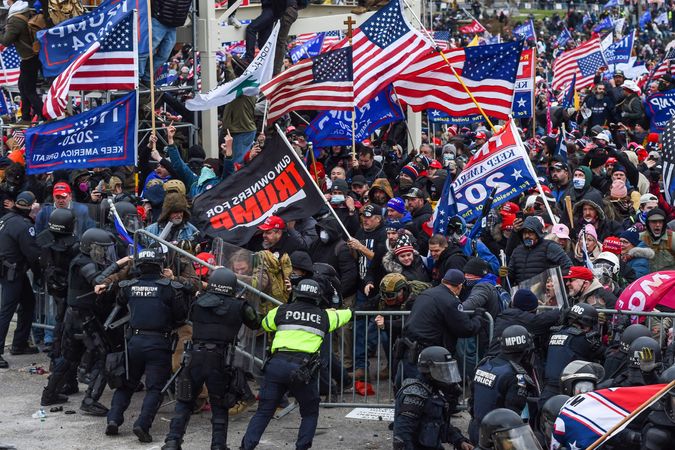 Trump supporters clash with police and security forces as they storm the US Capitol Wednesday. Demonstrators breeched security and entered the Capitol as Congress debated the a 2020 presidential election Electoral Vote Certification. Photo by Getty Images

Nachman Mostofsky, executive director of Chovevei Zion and a Trump supporter, flew to D.C. for the rally. He said that unlike the unrest in cities across the country following the murder of George Floyd, the Capitol complex was “at least the correct source of the feeling” of anger from conservatives.

“With that said, rioting is un-American,” Mostofsky said, adding that he did not believe those who entered the Capitol were true conservatives. “The leaders of the riots are grifters.”

Far-right Orthodox Jewish activist Heshy Tischler appeared in a video from D.C. with a man wearing a shawl decorated with the Virgin Mary blowing a shofar.

The man, who gave his name as Alan, said: “I’m going to blow the shofar for President Donald Trump, for his first and second term.” 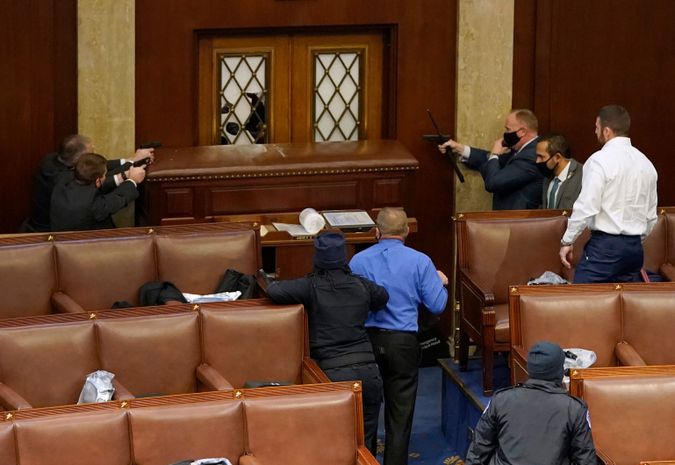 U.S. Capitol police officers point their guns at a door that was vandalized in the House Chamber during a joint session of Congress on Wednesday. Photo by Getty Images

Nadine Bloch, a veteran Jewish activist and member of Beautiful Trouble, said she has been protesting in D.C. for decades and was once arrested for yelling in the Senate gallery.

“This is about the authorities failing to do their job and protect our constitution and our limited democratic process.”

Bloch was floored by the police reaction to the protesters and said such a demonstration and violent entrance to the Capitol would not have been allowed if it had been on behalf of a progressive cause.

“This is about the authorities failing to do their job and protect our constitution and our limited democratic process,” Bloch said. “This is a case where the system has failed us.”

David Walsh, a postdoctoral fellow at the University of Virginia who studies the far-right, agreed the storming of the Capitol by protesters was unprecedented.

“In the American context, nothing like this has ever happened before,” Walsh said. Walsh said that Jews should be alarmed by the escalation in violence and said the QAnon conspiracy theory that has been woven throughout the “Stop the Steal” protests was essentially an antisemitic “blood libel.”

Walsh warned this might only be the beginning of these kind of actions by far-right demonstrators: “Once this type of thing starts, it will generally happen again.”