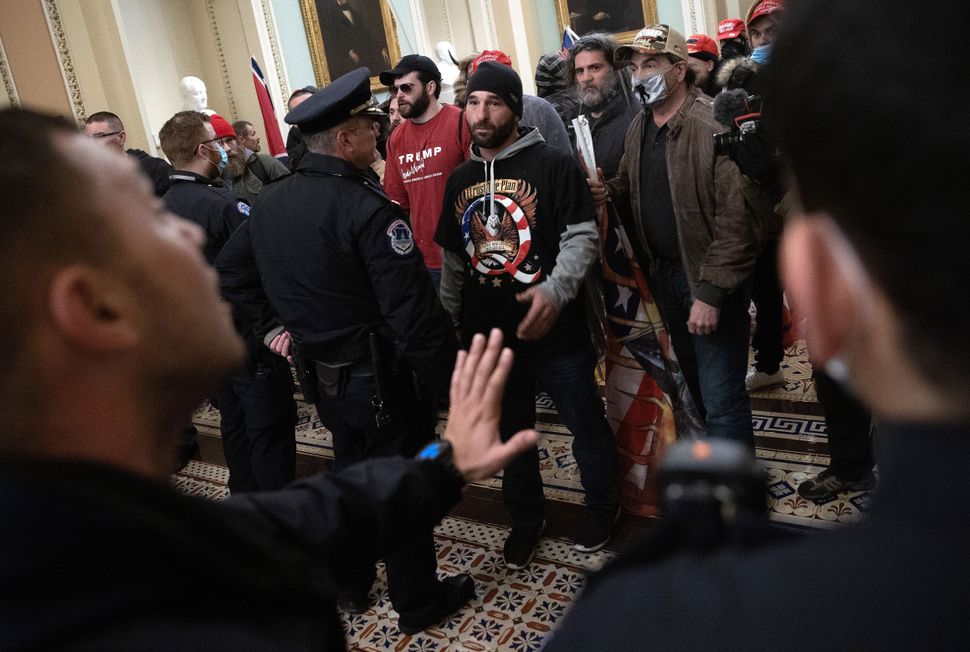 A pro-Trump mob confronts U.S. Capitol police after the group stormed the building on January 06, 2021 in Washington, DC. Photo by Win McNamee/Getty Images

As photos and videos of the insurrection at the Capitol trickled out of Washington, D.C., a pattern emerged — well-known antisemites and their symbols were at the uprising or cheering it on from afar.

Here’s a guide to some of the things we’ve seen so far:

James is a longtime white supremacist skinhead who beat someone nearly to death for declining to give a “seig heil” salute. He used to be involved in the Ku Klux Klan in Indiana.

56/ Whatever the outcome of today, this has been hugely galvanizing for the far-right.

Indiana Proud Boys President and former KKK member Brien James claims that “We are loading up and headed out” after being inspired by the Capitol Building takeover. pic.twitter.com/SukZ3P0elW

The Proud Boys, a mainly misogynistic and anti-immigrant group with ties to antisemites, has confronted a defection within the organization that wants to rebrand as explicitly antisemitic, including a name change to the “Proud Goys.” This was the group name-checked by President Donald Trump during a 2020 presidential debate that also clashed with anti-fascist protesters earlier in the year in Portland.

Proud boys fight in front of the Capitol pic.twitter.com/0Zbb62EdWt

Tim Gionet, known online as “Baked Alaska,” has tweeted about how “Jews control the News,” and wrote to followers about being “JQ’d,” an abbreviation for the “Jewish Question,” meaning he had bought into antisemitic conspiracy theories. A final tweet that got him banned from the platform was a photoshopped image of far-right agitator Laura Loomer, a Jew, in a gas chamber.

The Nationalist Social Club, or NSC 131, has its roots in Eastern Massachusetts. Members believe that Mossad was behind the 9/11 terror attacks, that Jews are working toward the extinction of the white race and that the Holocaust is a hoax.

OK… the NSC 131 — a neo-Nazi group based in New England, with members in Mass, NH and #Maine — are part of the Captiol takeover. No surprise the rioting “patriots” have support from real Nazis. #mepolitics pic.twitter.com/2FtnV66UGl

The QAnon conspiracy theory deals in antisemitic tropes, including the belief that a cabal of satan-worshipping global elites is operating a child sex-trafficking ring and harvesting children’s blood. Believers think that the Rothschild family controls the nation’s banks and that George Soros is the evil mastermind behind a garden variety of perceived social ills, including racial justice protests, mail-in voting and feminism.

The guy in #redface who stormed the capitol today is Arizona right-winger Jake Angeli. It’s not a coincidence that an iconic image of white nationalism in 2021 is a dude playing Indian. https://t.co/D8KFTeRVb2

Kekistan is a fake country dreamed up by members of the alt-right. The flag mimics a German Nazi war flag — it’s green instead of red, and a new logo replaces the swastika.

Can we talk about how some of these trump supporters are flying a legit n*azi/white supremacy flag? pic.twitter.com/7qOn4CziWo

Matthew Heimbach is a white nationalist who helps lead the neo-Confederate League of the South. He started the White Student Union at Towson University of Maryland before he graduated in 2013. He was fined more than $12,000 for his participation in the deadly “Unite the Right” rally in Charlottesville in 2017.

These are literally two Neo Nazis. One of them is Matthew Heimbach, who planned the Unite The Right Rally in Charlottesville https://t.co/58pNtQcesE