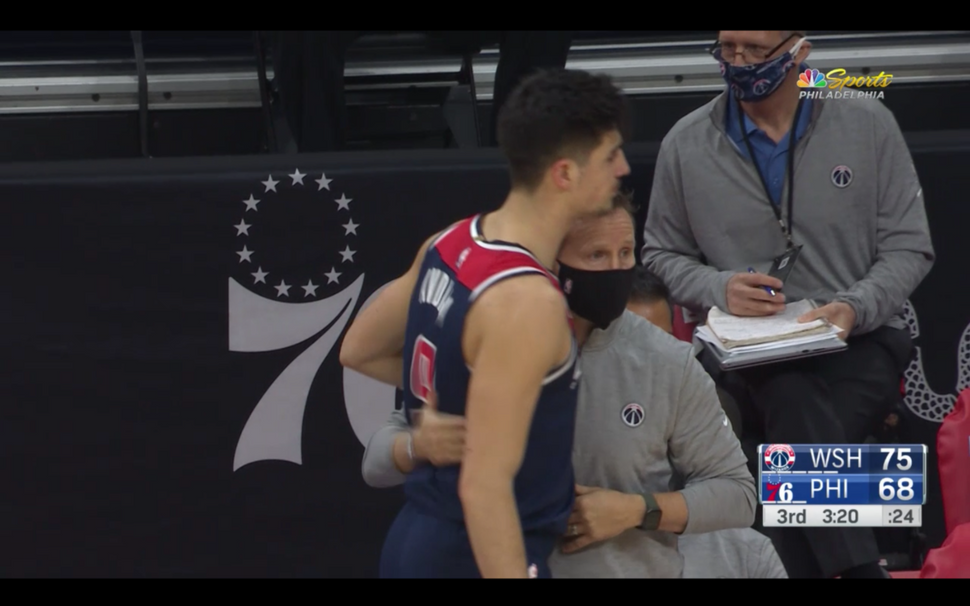 1,000 words on the nature of this hug Image by Screenshot

So, after starting the season with five straight losses, the Washington Wizards strung together a pair of wins against Minnesota and Brooklyn last weekend. But Deni Avdija has seen his minutes decline since the New Year, and he continues to be kept off the floor in the game’s key moments. In Wednesday night’s loss to Philadelphia, he finished with a season-low 1 point in 16 minutes.

What’s strange about Deni’s loss of playing time is that in the games leading up to that dud, he didn’t seem to be playing any worse.

In fact, the two victories produced some of Deni’s brightest moments so far, winning plays that were less glimpses of the future than microcosms of the present. Again, it feels necessary to reiterate that he is a valuable player for the Wizards right now. I’m going to keep saying this until he’s closing games with the starters.

The Timberwolves game on New Year’s Day let Deni square up against the top pick in the November draft, Anthony Edwards. They don’t play the same position — Edwards is a couple inches shorter, more guard than forward, and 48 minutes is hardly a representative sample. But if the Wizards blowout demonstrated one thing that is true about these two rookies right now, it is the gap between Edwards and Avdija (who turned 20 on January 3 and is 7 months Edwards’ senior) when it comes to helping their teams win.

Edwards couldn’t hit a shot in the first three quarters, rendering him effectively useless on the floor while the game was competitive. He doesn’t rebound, defend, or create at a high enough level to make his team better when he’s not putting the ball in the basket himself. Avdija wasn’t exactly making it rain either — he only attempted seven shots to Edwards’ 16. But the little things he did on the floor, including 7 boards and 3 steals, helped him to a game-high +32 in his 27 minutes on the floor.

The highlight of the night came halfway through the first quarter, when Deni received a pass at the top of the arc and was met with a screen set by big man Thomas Bryant. Deni took two dribbles to his left curling tightly around the screen, putting his initial defender behind him. Then, with the opposing center (Bryant’s man) coming over to help on Avdija, but Bryant still early in his roll to the basket, Deni lowered his head and took one more hard dribble, a feint that froze that defender just long enough. Then, as that ‘big’ was retreating to Bryant, Deni — still drifting towards the baseline — tossed a perfect lob over his head to a leaping Bryant, who caught it with two hands and spiked it home with one.

It’s the third dribble that gets me — the savviness of the read. Is this innate or learned? Does it have to be one or the other?

There’s evidence of both. In a recent comment, superstar teammate Bradley Beal (who’s pacing the league in scoring, by the way) praised Deni as “a man of a million questions.” Deni’s curiosity is, I think, innate (or perhaps instilled at seders past); he told the media that he researches every city the team plays in. But what he gets out of asking is, of course, learned. Head coach Scott Brooks provided a revealing example:

“I love the questions he’s asking me,” Brooks said. “[Recently] he said ‘Coach, can you play define playing hard?’”

There are good answers to that question (that are not “diving for every loose ball!”), answers that Brooks, a hard-nosed former point guard, would thrill at supplying a hungry rookie. Playing hard is: running to set a screen, finding a body to box out when a shot is in the air, hustling back to get behind the ball in transition. But “playing hard” is an empty platitude without a definition, and by soliciting an actionable definition of the term Deni is helping Brooks be a better coach.

Moreover, Deni is both playing hard and playing hard already, and doing those little things more consistently than some of his older teammates. In this one possession, he denies an easy pass from Joel Embiid to Deni’s man, the 76ers’ Tobias Harris, by guarding him all the way to the half court line, turning a simple post-up into a dead end. His work doesn’t stop there.

When Harris comes to take a handoff from Embiid, Deni denies that, too, poking the ball away and nearly coming up with the steal. After he lunges to keep the ball in bounds, he darts back into the play and finds the correct man, Ben Simmons (the player furthest from the ball). It’s only because Rui Hachimura switches too late onto Seth Curry — and closes out with a reckless fly-by that takes him out of the play entirely — that Avdija has to fly out to Curry, too. He gets there a half-second too late, and Curry (who led the league in 3-point percentage last year) buries the triple.

So, why the loss in playing time as of late? We’ll go into that more in the next entry.

In the meantime, please subscribe to DENI DIARY if you haven’t already.