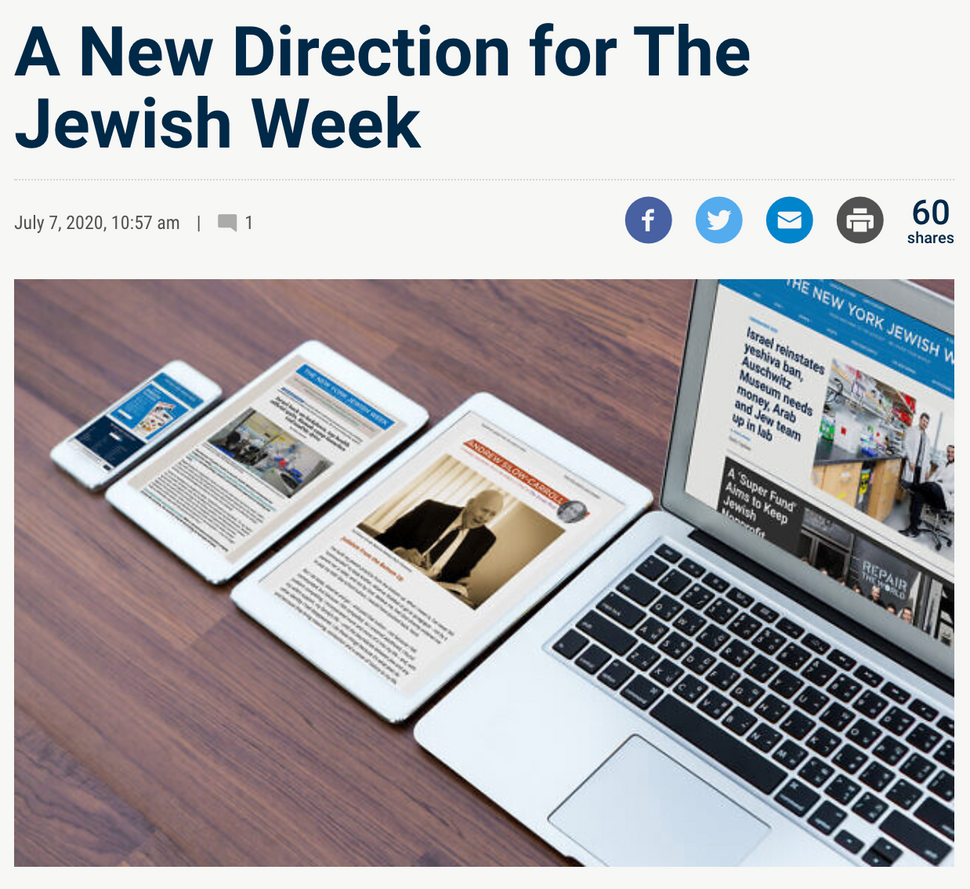 To say Andrew Silow-Carroll is excited would be an understatement. “I’m licking my chops,” he said on Monday afternoon after news broke that his previous employer, 70 Faces Media, would acquire the ailing New York Jewish Week, where he has been editor-in-chief since late 2019.

Silow-Carroll, who has worked in Jewish journalism for decades, took over a paper that was already in financial distress, only to see its fortunes plummet — like those of so many other Jewish and local news outlets — due to the coronavirus pandemic. Now, he feels he has been thrown a lifeline.

The acquisition by 70 Faces Media, a New York-based nonprofit that operates several other Jewish news and information sites, was billed as an experiment in building sustainable local Jewish journalism. Its properties include the Jewish Telegraphic Agency (JTA), a wire service where Silow-Carroll previously served as editor (and of which the Forward is a client); Kveller, a resource for Jewish parents; Alma, a news site geared towards millennial Jewish women; Nosher, a kosher recipes portal; and My Jewish Learning, an educational hub. “I’m licking my chops to have their expertise to help me build an audience and rethink what journalism should be in the digital space,” Silow-Carroll said.

When two media companies merge, the backstories often include late-night cocktails and back-of-the-napkin scribblings. But with the pandemic having taken such in-person discussions off the table, this deal was negotiated over emails, phone calls and Zoom meetings that, editors said on Monday, began shortly after the pandemic struck in the spring of 2020.

It’s been a difficult nine months for The Jewish Week. The decades-old newspaper suspended print operations in July, moved their operation online and was forced to lay off employees. “We were really looking for a more sustainable model,” Silow-Carroll said.

The acquisition was a hopeful note after a string of other local Jewish publications have contracted operations or closed in recent months and years. In Los Angeles, the Jewish Journal ceased its print operations in October. In Boston, the 118 year-old Jewish Advocate closed down its weekly print edition as well, moving wholly online. The Chicago Jewish Star closed in 2017 and the Chicago Jewish News both shuttered in 2019. Both had been published since the early 1990s.

The Jewish Chronicle, a British newspaper that began printing in 1841, and the 60-year-old Canadian Jewish News both became casualties of the pandemic when they ceased operations in 2020. Professor Jonathan Sarna, a pre-eminent scholar of American Jewish history, discussed those closings during a Forward-sponsored webinar about Jewish journalism during the coronavirus crisis. “For a long time, Jewish newspapers were a reasonably good business,” he said. “Even small ones could support themselves because they lived off of local advertising. That era is finished. There’s no way we’re going to bring it back.”

In a related op-ed for the Pittsburgh Jewish Chronicle, Sarna pondered the implications of a shrinking Jewish media space.

“What does it mean when Jewish journalism dies?,” he wrote. “Since their establishment in the first half of the 19th century, Jewish newspapers in the United States have helped to shape community, tied far-flung Jews together, and kept them informed. Newspapers have also preserved the ‘first draft’ of our communal history. Want to know, for example, how America’s Jews handled past epidemics? There is only one source: the American Jewish press.”

Approximately 1,800 newsrooms have closed since 2004, at a rate of about 100 per year. That’s according to Penny Abernathy, a journalism professor who has done extensive research on local “news deserts.” And those numbers have only increased during the pandemic, when high unemployment and an exodus of advertisers has exacerbated already-thin margins and tenuous financial situations.

Local newspapers across the country — from Vermont to Oklahoma and beyond — have cut back the number of days they print, laid off employees or completely shut down.

As for The Jewish Week, talks intensified with 70 Faces Media in the fall and came into place around New Year’s, editors at both publications said. “The idea just felt like a no-brainer,” said Philissa Cramer, JTA’s editor-in-chief. “I’ve been waiting so long for this day, because we’ve known it was going to happen, and there’s so much exciting work that we can do together.”

In an announcement to its readers on Monday, 70 Faces said the deal “brings two of Jewish journalism’s most storied brands under one sturdy roof.” Silow-Carroll will stay on as editor of The Jewish Week. (Silow-Carroll served as Managing Editor of The Forward from 1999 to 2003.)

The JTA statement said that 70 Faces Media had also acquired the Jewish Week’s annual series of public forums and several of its other programs, including two student writing programs (Fresh Ink for Teens and Write on For Israel) and The Conversation, an annual retreat for top and emerging thought-leaders in Jewish life. Thea Wieseltier, who oversaw these programs, will continue to work on them in a newly created position at 70 Faces Media. Hannah Dreyfus, a Jewish Week reporter who fell victim to the layoffs, has been re-hired.

“Every community deserves a strong, independent Jewish newspaper,” Silow-Carroll said. “And, especially, in what I would immodestly call the capital of North American Jewry.”

The New York Jewish Week’s website, like that of many other local Jewish newspapers, is currently hosted by the Times of Israel. Cramer and Silow-Carroll said that partnership would continue in the short-term.

Cramer said that the acquisition is an experiment in solving the local news crisis and that, down the road, it could be a model for linking other local Jewish outlets to the JTA and 70 Faces. But, for now, she’s laser-focused on this new partnership. “Our first priority is making sure that local readers in New York City have uninterrupted and high quality coverage.”

As for Silow-Carroll, who has worked for two decades in Jewish journalism, he is seizing the opportunity. “I have one goal in all this,” he said. “I’ve worked for a lot of Jewish publications, and I want to see the industry thrive. And if that means creating new models, I’m really glad to be part of that.”

Asked to look out across the Jewish media landscape of five years from now, Cramer laughed. “I don’t know what’s going to happen in five days.”

Benyamin Cohen is News Director of the Forward. Follow him on Twitter @benyamincohen or email [email protected]