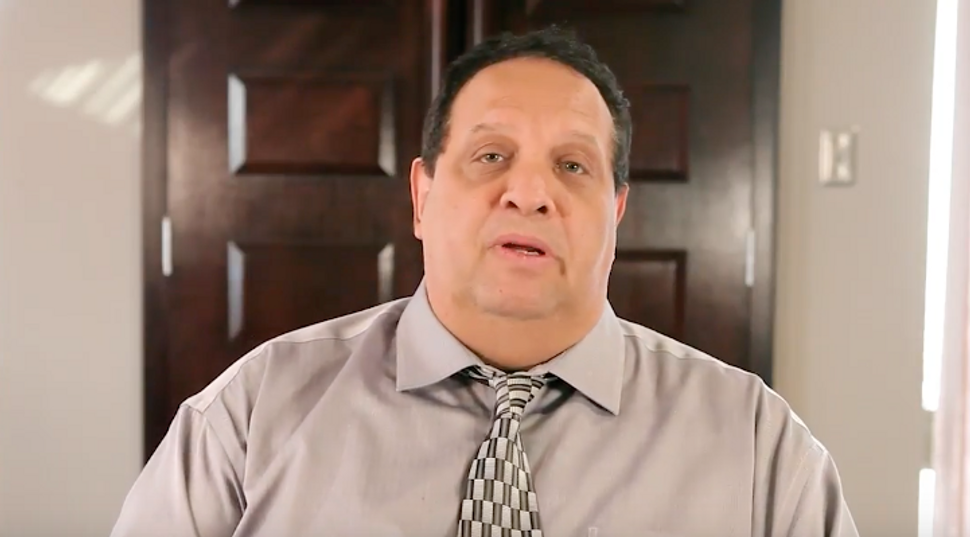 (JTA) — An AEPi executive is leaving his position with a group whose political arm took part in the Jan. 6 pro-Donald Trump rally in Washington.

Andrew Borans, the CEO of the Alpha Epsilon Pi Foundation, served on the advisory council of Turning Point USA, a pro-Donald Trump organization whose political arm participated in the Jan. 6 Washington, D.C. protest of the election results. The protest preceded the storming of the Capitol that left five people dead.

In a Facebook post Thursday morning announcing he would step down from the advisory council, Borans said he “was never involved in any day to day activities [of Turning Point] or even knew about them.” He wrote that he was introduced to the group by AEPi members and had advised Turning Point on how to best help Jewish college students.

He also wrote that Turning Point’s contingent left the rally before the storming of the Capitol, and, “Conflating Turning Point and Andy Borans as part of that horror show is dishonest at its core.”

“I will state unequivocally that I abhor violence of any kind and denounce a million times what occurred at the Capitol,” Borans wrote. “Like many of you, I watched on live television the scenes of anti-Semitism and violence on full display, and they shook me to my bone.”

Last week, Borans told JTA that his work with Turning Point was unconnected to his work with AEPi, where he has worked for decades and previously served as executive director. The fraternity also said in a statement that the two roles were unconnected.

But many alumni of AEPi, perhaps the best known Jewish fraternity, saw the matter differently. More than 1,000 AEPi alumni signed an open letter, originally published on Monday, calling on Borans to either step down from Turning Point or leave AEPi. The letter said that Borans’ work with Turning Point reflected on his leadership of the fraternity.

“How can we encourage [our sons] to join a fraternity that, at a minimum, stood by as its most active ambassador was involved with a group that facilitated an attack by an armed mob on the most prominent symbol of American democracy?” the letter reads. “You owe it to the brotherhood to issue a clear condemnation of TPUSA and the ideology behind the insurrection at the Capitol.”

The first two signatories to the letter, Pete and Alan Freeman, said in a joint statement that they appreciated Borans prioritizing his career with the fraternity.

“We applaud Andy Borans’ decision to resign from the TPUSA Advisory Council,” the statement says. “Our politics may be different, but he evidently made this decision in deference to the best interest of Alpha Epsilon Pi — an organization to which he has dedicated his career, and which continues to serve an important non-partisan role on college campuses.”

Turning Point USA’s political arm, Turning Point Action, sent seven buses to the Washington, D.C. rally. Turning Point Action, whose founder had also baselessly claimed the election was fraudulent, says its attendees left immediately after President Donald Trump’s speech and did not participate in the Capitol mob, some of whose members displayed anti-Semitic or racist symbols.

Turning Point Action denounced political violence, and in a statement to the Jewish Telegraphic Agency on Wednesday, said it and its affiliates — including the group that sent buses to the rally, Students for Trump — are “proud supporters of the Jewish people and the nation of Israel.”

“Not only did Turning Point Action and Students for Trump not have anything to do with the riots in Washington, the organization would never knowingly associate with anti-Semites or a group that harbors, excuses, or encourages anti-Semitism,” the statement says. “Anyone who suggests otherwise is either lying or painfully uninformed.”

The debate over Borans’ affiliation with Turning Point reflects the ongoing rifts among American Jews as they reckon with the effects and legacy of the Trump era. Borans, like many other national Jewish leaders, has long been politically active. He has donated to candidates from both parties — and more to Democrats than to Republicans.

Campaign finance records show that since 2015, he donated about $4,500 to Republicans, including gifts to Trump’s 2020 campaign and more than $1,000 over four donations to freshman Republican Rep. Madison Cawthorn, who faced backlash during the campaign due to a previous trip to the vacation home of Adolf Hitler, whom Cawthorn referred to as the “fuhrer.” Cawthorn said the trip was to honor the American soldiers who captured the compound, and that the Nazis were “one of the greatest evils in human history.” One day after the controversy broke, Borans gave Cawthorn $18.

Borans’ last donation to Cawthorn was in September. About two months later, Cawthorn emerged as a vocal advocate for overturning the election results, the topic of the Jan. 6 rally that Turning Point students joined.

But since 2015, Borans gave more than $11,400 to Democrats, including more than $8,700 to Democratic Rep. Josh Gottheimer, a centrist and AEPi alumnus of the University of Pennsylvania. Last year, he donated to the primary campaign of Antone Melton-Meaux, who unsuccessfully challenged Democratic Rep. Ilhan Omar, a supporter of boycotting Israel.

Borans has also given explicitly to oppose a white supremacist’s campaign: In 2016, he donated to a political action committee opposing the quixotic Senate bid of David Duke, the white supremacist leader.

Borans did not respond to questions about his donations. AEPi spokesman Jonathan Pierce pointed to Borans’ history of donating to a nonpartisan political action committee as well as to Democrats, including to Joe Biden’s 1988 presidential campaign. Pierce told JTA that Borans “has a long history of supporting pro-Israel candidates on both sides of the aisle.”

But the open letter showed that some AEPi alums felt Borans’ affiliation with Turning Point crossed the lines of accepted debate and associated their fraternity with what the letter deemed an “extremist group.”

The letter included a wide range of signatories, from members who graduated in the 1960s to a few current college freshmen. Started by a group of Columbia University alumni, the letter has been signed by AEPi brothers across North America.

It is unclear, however, if all the signatures are authentic. The name of AEPi’s board president-elect, for example, initially appeared on the letter. Reached by JTA Tuesday, he said he did not, in fact, sign the letter.

Several AEPi brothers who spoke to JTA said they had passing interactions or ongoing relationships with Borans over the years. Before he learned of Borans’ decision to leave Turning Point, Pete Freeman said that he would prefer Borans to leave the group and remain with AEPi, where Freeman said “he is clearly valued.”

“We’re [fraternity] brothers, we take that seriously. Andy helped us think about ourselves that way,” said Pete Freeman, who is not related to Josh Freeman, another AEPi alum who had drawn attention to Borans’ Turning Point involvement. “I respect anybody’s right to lobby for causes that are important to them, associate with groups with whom they find common cause, but when you’re put in a leadership position with one of those groups, it reflects on everything else you do.”

“The beauty of being an American is being able to freely associate with whatever organization you choose,” he wrote. “I will continue to be a proud American, proud Jew and serve the greatest organization I have ever had the privilege of belonging to and that is AEPi.”