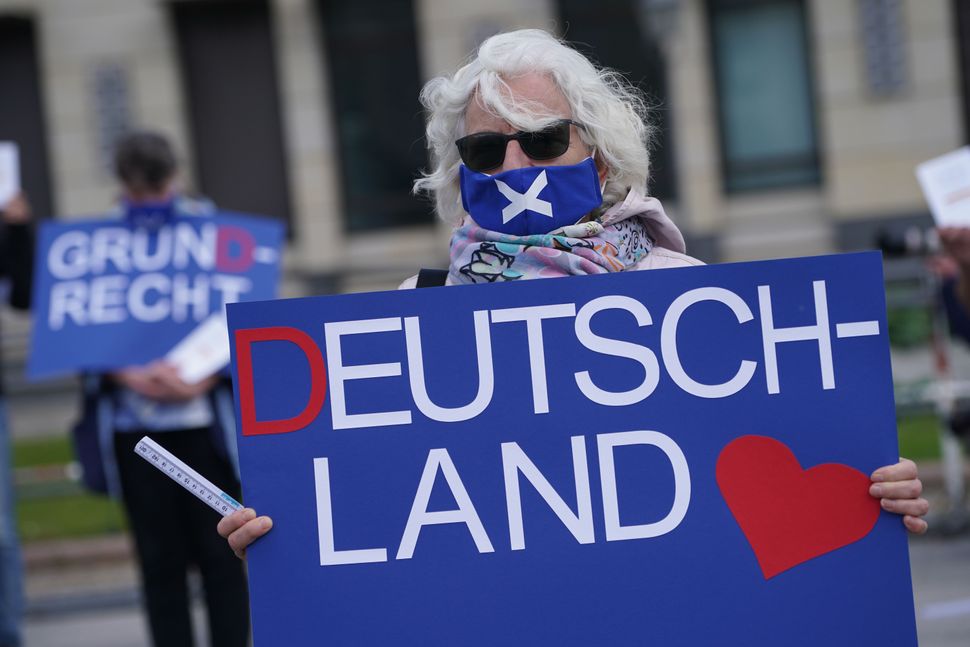 Supporters of the right-wing Alternative for Germany (AfD) political party wear protective face masks as they hold signs that read: “basic right” and “Germany” at an AfD gathering to protest against lockdown measures and other government policies relating to the novel coronavirus crisis on May 16, 2020, in Berlin, Germany. Photo by Sean Gallup/Getty Images

Officially, the Jewish branch of the far-right Alternative for Germany (AfD) political party has just 24 members. Its co-chair, Artur Abramovych, has a surprising message for Haaretz, though: “You have to know that there are many Jews who vote for the AfD.”

The party has proved one of the most controversial in Germany since its founding in 2013 and is now preparing for general elections later this year by stepping up its anti-immigration platform and railing against the “establishment,” which has been led by outgoing Chancellor Angela Merkel for the past 16 years.

The AfD shocked many in Europe when it became the third-biggest party in the Bundestag in 2017, after immigration became the number one election issue following Merkel’s decision to open the country’s borders to more than a million immigrants, mainly from Muslim countries, in 2015.

Why would a party that has been widely criticized for frequent antisemitic messaging appeal to Jewish voters? Well, its decision to brand itself as a staunch pro-Israel supporter has attracted some unlikely supporters – seemingly including Yair Netanyahu, the son of Israeli Prime Minister Benjamin Netanyahu.

Joachim Kuhs, a senior European Parliament member for the AfD, used a quote from Netanyahu Jr. in a Twitter campaign ad ahead of last spring’s European Parliamentary elections, citing the Israeli’s call for Europe to “return to being free, democratic and Christian!”

Yair Netanyahu responded to the tweet by writing: “Please act with your colleagues to stop this insanity!” He added a link to an article about the German funding of organizations that allegedly call for boycotts, divestment and sanctions against Israel, “lawfare” campaigns, anti-Zionism, a “one-state” solution, antisemitism and violence.

It was in 2018 that a small group of German Jews decided they would not only back the AfD at the ballot box but create a “Jewish division” within the party. The subject of Jews allying with a far-right party in the land where Nazism was born made their decision all the more controversial.

German journalist Pola Sarah Nathusius attended the launch in the city of Weisbaden and recalls an “odd” atmosphere at the event, which featured a large police presence.

“AfD members were enthusiastically holding speeches about the founding of the group as if the AfD isn’t a highly antisemitic and racist party,” she told Haaretz. “They tried to make the journalists feel uncomfortable – for example, by reading out our full names from a list in front of everybody.”

The formation of the Jewish branch swiftly drew criticism from the Central Council of Jews in Germany (CCJG), a federation of German Jews established in 1950.

“The AfD is not a party for Jews. … The AfD is a party in which hatred of the Jews and the denial of the Holocaust have a home. The AfD is antidemocratic, inhumane and, in many parts, right-wing extremist,” a statement from the CCJG said shortly after Jews in AfD was formed.

Speaking to Haaretz from the German city of Bamberg, Abramovych says he “wasn’t surprised” by the response his group received. “There’s always been a split in the Jewish community when it comes to politics,” he shrugs.

The AfD sees itself as a bulwark against the antisemitism that they say has been brought into Germany by Muslim immigrants – a notion mainstream Jewish community leaders reject. They’re warning members against voting for the AfD, partly due to its anti-Muslim agenda but also in response to insensitive remarks about the Holocaust by party leaders.

At a party convention in 2018, AfD co-founder and lawmaker Alexander Gauland made headlines after saying: “Hitler and the Nazis are just a speck of bird poop in more than 1,000 years of successful German history.”

Abramovych, 25, admits Gauland’s remark was “undoubtedly stupid.” However, he defends the party’s former co-leader by noting that what Gauland meant to say “was that Germans only speak about the Nazi years and leave out the rest of our history. If you go back further, for example, and compare the French Third Republic [1870-1940] to the German Empire [1871-1918], Jews lived better in Germany.”

He adds: “It’s important that we continue to talk and learn from the Nazi past, but we have to remember the other parts of our [Jewish] history. If not, we will continue to be victims – and we’re not. Look at how strong Israel is.”

The party received a symbolic image boost in its efforts to appear friendly toward Jews when Germany’s best-known Jewish journalist, Henryk Broder, gave a speech at an AfD convention in the Bundestag in January 2019.

Broder, 74, who has written for major German publications like Der Spiegel and appears frequently on TV talk shows, told Haaretz he was invited to speak and didn’t have a problem with it.

“Judging by what they say and what they do, the AfD is not an antisemitic party,” Broder says. “But some party members are antisemites and the party does not have the balls to send them to hell. The same goes for the left-wing Die Linke party,” he adds.

Asked if he believes that the AfD is reaching out to the Jewish community to whitewash accusations of racism, Broder offers the rhetorical response that “maybe the AfD is looking for Jewish sponsors?”

Many of the AfD’s Jewish voters are believed to be Russian-speaking Germans who moved west when the Soviet Union crumbled in the early 1990s. Rough estimates say that Jewish immigrants from the former Soviet Union make up 80 to 90 percent of Germany’s 200,000 Jewish residents nowadays. The biggest Jewish communities are found in Berlin, Frankfurt and Munich, but there are others scattered across the country, including in the former East Germany.

The AfD has successfully targeted the Russian-speaking community, translating campaign ads and flyers into Russian. The party proudly claims that a third of its voters are Russian-speaking Germans. Abramovych himself immigrated to Germany from what is now Ukraine when the Soviet Union fell and agrees that the party relies on support from immigrants from the FSU.

“There’s definitely strong support from Russian-speaking Jews,” he says. “The majority of the members of the Jews in AfD group are either immigrants or children of immigrants from the Soviet Union. Including myself.”

Abraham Lehrer is vice president of the CCJG. He notes that while there are no official statistics about Jewish voter patterns in Germany, he questions the idea that a growing number of estranged Jews from the FSU are affiliating with the AfD.

“I can’t say this theory is wrong, but I would say that 95 percent of Jews from the former Soviet Union belong to the Jewish community, and I don’t see any of those tendencies.” Lehrer does concede, though, that some Jews “did vote for the AfD in the last election – that we know for sure.”

He also stresses that his organization doesn’t “know most of these people who are members of Jews in AfD, and we don’t think they’re members of the Jewish community. And most importantly,” he adds, “we think they’re in the wrong place.”

Sergey Lagodinsky is a member of the European Parliament for the Greens/EFA. He believes there’s a “somewhat post-Soviet element” to Jewish support for the far-right party, and that there’s definitely a “Russian link when it comes to the AfD. Last December, you had party members meeting with Russian Foreign Minister Sergey Lavrov in Moscow. And in the Bundestag, they insist that we should improve relations with Russia. There’s a tendency among Jews from the former Soviet Union to be hesitant and fearful in exploring and experimenting with social and cultural diversity,” Lagodinsky told Haaretz.

“This newspaper is the Russian-Jewish window into politics. And now they’re basically doing AfD, Trump and anti-Merkel propaganda,” Lagodinsky notes. “And most of the older Russian-speaking Jews who don’t read German newspapers only have this media to rely on for information.”

The newspaper was initially published in Germany from 1902 until the day before the Kristallnacht pogroms on November 9, 1938, and was later relaunched by Dr. Rafael Korenzecher in 2014.

Korenzecher is particularly critical of German left-wingers and the political establishment led by Merkel, accusing them of failing to combat antisemitism, pushing “anti-Israel” policies and allowing the “import of Islamic Jew haters.”

The Jewish Review publisher told Haaretz that he doesn’t know any Jews who affiliate with the AfD, and that the party clearly has problems with antisemitism. “But Berlin is not the Weimar Republic and the AfD is not the NSDAP [Nazi Party]. It’s mainly nationalist, but thank God it’s not a socialist party. There are antisemites in the AfD, nobody would deny this. But there are just as many in the established parties – especially on the left.

“In any case,” he continues, “Jews aren’t leaving Germany and Europe because of the AfD or Mr. Gauland. They’re leaving because of the increasingly intolerable anti-Jewish climate of the established German government, which is becoming more and more accepting of Islamic antisemitic positions,” Korenzecher says.

While the AfD, and parts of the Jewish community, see a direct link between immigration from Muslim countries and rising antisemitism in Germany, government statistics tell a different story. There were 2,032 antisemitic crimes committed in 2019, a record high in modern times, of which 93.4 percent were carried out by those on the far right. The most notable recent example was the terror attack on a synagogue in Halle by a far-right extremist in September 2019 – one of the worst antisemitic assaults in Germany’s postwar history. That doesn’t mean antisemitism doesn’t exist in Germany’s Muslim communities, though: Reports of Muslims verbally and physically assaulting Jews in public spaces is testament to that.

The AfD rejects the claim that the attacks are overwhelmingly by the far right. “The politically correct claim for the mainstream that 93 percent of antisemitism comes from the ‘right’ is a transparent maneuver … to conceal Muslim antisemitism in Germany,” AfD Deputy Leader Beatrix von Storch claimed after the government statistics were published.

The question now is whether the AfD will manage to portray itself ahead of the elections as a true “alternative” for those German Jews who say they feel threatened by rising antisemitism. Right now, the party is polling at only 10 percent, a big drop from 2017, suggesting that lightning will not strike twice in September.