After serving in his administration, Elliott Abrams hasn’t changed his (negative) views about Trump 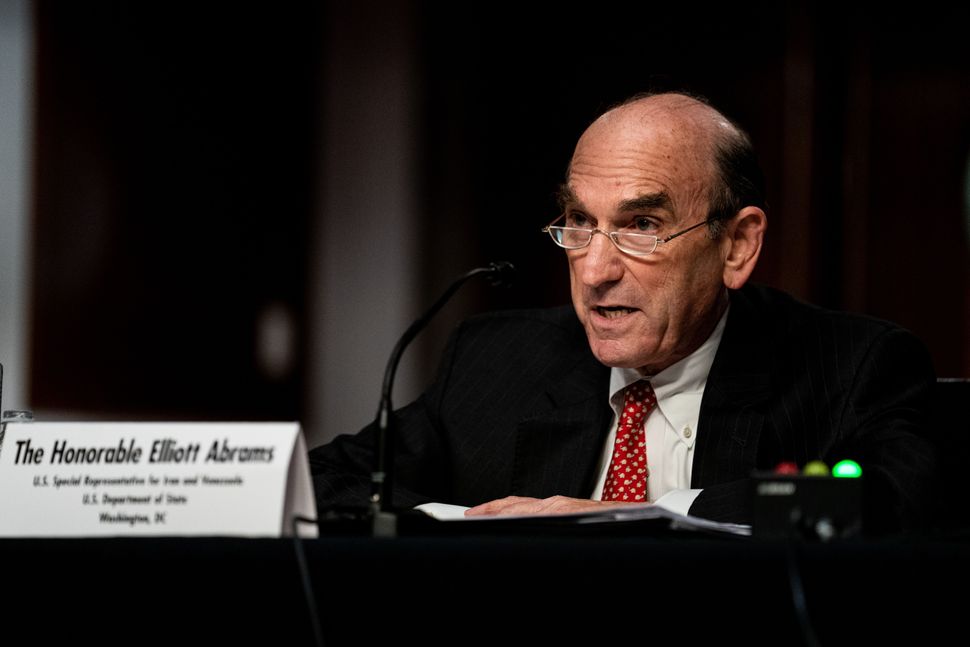 Elliot Abrams was the special representative for Iran and Venezuela at the State Department during the Trump administration. Photo by Erin Schaff/Getty Images

Elliott Abrams was in his State Department office when the Jan. 6 insurrection broke out at the Capitol. Because the office was in a secure location without cell phone service, Abrams, then the Trump administration’s special representative on Iran, was not aware of what was happening. When he learned of the assault that Trump supporters were making against America’s democratic institutions, Abrams said in an interview this week, he was shaken to the core.

“I share the view that it was a horrifying and criminal attack on our constitution and our Congress,” said Abrams, a veteran Republican foreign-policy official. Asked if he holds President Donald Trump himself accountable for inciting the crowd, which included virulent antisemites and white supremacists, Abrams said he’d “stick with” the assessment of Sen. Mitch McConnell, who has blamed Trump for the deadly mob, saying the protesters were “fed lies” and “provoked” to act to overturn the election results.

Though he served two years in Trump’s State Department, Abrams — who supported Sens. Ted Cruz and Marco Rubio in the 2016 primaries and refused to back Trump even after he became the Republican nominee — said he never converted.

“In 2016 I said Donald Trump was not fit to be president, and my view on that never wavered,” he explained. And while he does believe the administration had significant accomplishments on Iran and other areas he worked on, Abrams said that what happened on Jan. 6, “taints” that legacy.

“It’s a great deal harder to remind people of the positive things that were done — for example with respect to the security of Israel,” he said.

Abrams, who has returned to the Council on Foreign Relations, urged Republicans and others who supported Trump’s withdrawal from the Iran nuclear deal to give President Joe Biden a grace period. “I think we should keep an open mind about the Biden administration’s foreign policy,” he said, “and let’s see how much alike it is to Obama’s or how different it is.”

Abrams, a neoconservative who held senior national-security posts in both the Reagan and George W. Bush administrations, was convicted of two misdemeanors in the Iran-Contra scandal but later pardoned. After Trump’s 2016 election, he was seriously considered for Deputy Secretary of State, but the president ultimately blocked his appointment because of critical comments he had made, including OpEds saying neither Trump nor his Democratic opponent, Hillary Clinton, were fit to be president, and counseling Republicans to speak out against Trump.

But Abrams ultimately joined the Trump administration in January 2019 as the State Department’s special representative for Venezuela, and in August 2020, Abrams replaced Brian Hook as the special envoy on Iran.

Abrams said in the interview on Tuesday that he believed it was a “worthy cause” to join the administration — after he was approached by former Secretary of State Mike Pompeo — given his passion about the Latin American country’s struggle for democracy and his past experience on the Iranian issue. “Why Trump let it happen in 2019 when he didn’t let it happen in 2017, I have no idea,” he added.

Abrams said that as Trump and senior White House officials refused to accept the election results in the days after the Nov. 3 elections, his work shifted towards containing the situation in fear of Iranian provocation on the first anniversary of the killing of Iranian General Qassim Soleimani in Iraq.

Abrams, who said “it was obvious that President Biden won the election,” maintained that the Iranians held back from provocations because they knew the Trump administration would retaliate to any strike on U.S. forces in the region, and said that deterrence continued during the transition. He pointed out that Iran curtailed its provocative activities in the region back in October, realizing that a strong U.S. response could work in Trump’s favor ahead of the presidential election.

“When that message was delivered, it was understood by the Iranians and they backed away from a confrontation,” he said. “I think that message needs to be delivered again by the new administration.” On Tuesday, a B-52 bomber flew across the Persian Gulf region, the sixth such show of strength since last fall.

Reflecting on his own work over the last six months, Abrams said that the accomplishments on the Iranian front were that the administration maintained the economic sanctions regime, even applying more pressure in the days before Biden’s inauguration, while at the same time “ avoided a military confrontation by deterring Iran from trying to kill Americans in Iraq.”

Abrams said he’d hoped that the Biden administration would use the leverage created by the sanctions and not reenter the 2015 nuclear deal. But since Biden indicated during the campaign that he does want to rejoin the deal, Abrams said it is important to tie sanctions relief to the release of all American hostages.

Abrams suggested that discussions with U.S. allies and with Iran about returning to the international accord might take a while, echoing comments that incoming Secretary of State Anthony Blinken made in his Senate confirmation hearings last week.

Now that he is back at the Council of Foreign Relations, where he had been senior fellow on Middle Eastern studies since leaving the Bush administration, Abrams said he will work on moving party leaders back to “traditional Republican foreign policy” from before the Trump era, which is more engagement in the Middle East and less isolationism. Asked if he supports the Senate impeachment trial against Trump to bar him from running for office again, Abrams demurred.

“Whether someone who has left office can be impeached strikes me as a tough legal question likely to end up in the Supreme Court,” he said. “I’ve never studied it and can see the arguments on both sides.”

After serving in his administration, Elliott Abrams hasn’t changed his (negative) views about Trump