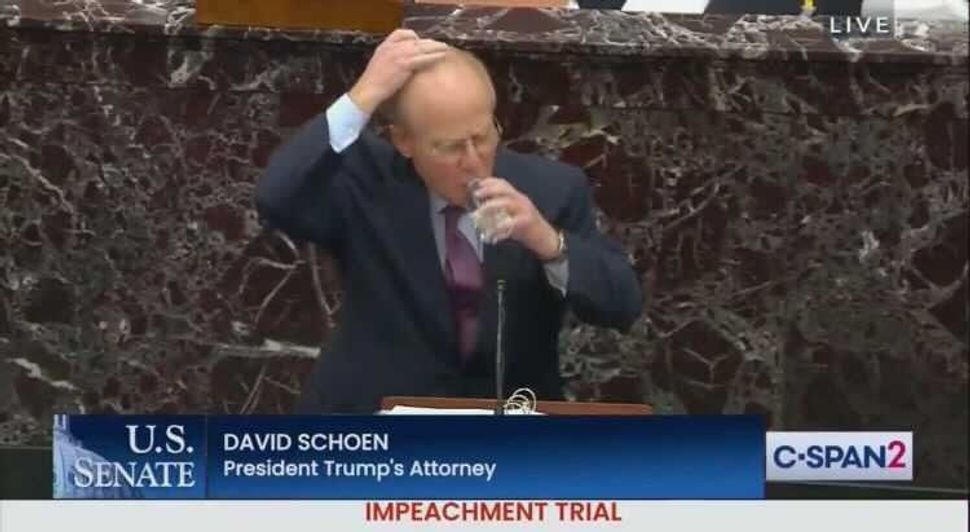 David Schoen made a public display of covering his head while at Donald Trump’s impeachment trial. Courtesy of C-SPAN

Twitter erupted on Tuesday afternoon with the most existential of Jewish questions: Can a hand substitute for a yarmulke?

The hoopla and hullabaloo began when David Schoen, the modern Orthodox attorney representing Donald Trump at his second impeachment trial, was making his case in front of the Senate. He grabbed the unmarked 8 oz. bottle of water to take a drink and – voila! – while one hand was holding the bottle, the other went straight to cover his head.

My guess in all seriousness is that he normally wears a yarmulke and this was reflex. Schoen is modern Orthodox so that would make sense. But I defer to @jacobkornbluh https://t.co/MkKx6W03v2

Not since Schoen’s client took a two-handed sip of agua has a display of thirst-slaking generated so much interest. Within minutes, “He’s Jewish” began trending on Twitter.

Oh man, this is like a morality play written by my mother: Guy tries to be less conspicuously Jewish and puts his yarmulka in his pocket, only to become a trending topic on Twitter when he has to use his hand as a yarmulka to bless the water. I love it! pic.twitter.com/hdUa2309YD

It turns out that Schoen’s gesture poses a halachic head scratcher.

One reader directed us to the ruling by the Terumat HaDeshen, the famous 15th century Talmudist, that putting a hand on one’s head does not suffice to be able to recite a blessing, since one’s hand is not considered a yarmulke. However, one’s friend’s hand or sleeve is acceptable. The 17th century Polish Torah scholar known as the Bach, however, rules that one’s sleeve is acceptable.

On the C-SPAN live feed, Schoen is clearly seen using his bare hand, while his sleeve remained several inches from the tip of his dome.

Eagle-eyed sleuths slowed down the video as if they were studying the Zapruder film. Did Schoen, in fact, have the water bottle cap nestled into the palm of his right hand? If so, would that count as a tiny plastic yarmulke?

What nobody is saying, is that Schoen isn’t covering his head with his hand (which halachically wouldn’t count as a headcovering), he is covering it with the BOTTLE CAP!

More questions arose: Should we be calling it a yarmulke? A kippah? A skullcap? Could he have grabbed a tissue and, if so, would it need to be double-ply? Did he perhaps think he had his yarmulke on and was merely reaching to keep it from falling off? And why wasn’t he wearing the yarmulke to begin with, allowing him to have both hands available to argue his case? Many modern Orthodox Jews choose not to wear a yarmulke in business settings, but will often put one on while eating, drinking or reciting a prayer.

When asked about the issue by CNN on Tuesday evening, Schoen explained why he wasn’t wearing a yarmulke. “I just wasn’t sure if it was appropriate,” he said. “I didn’t want to offend anyone.” He added: “It’s just an awkward thing and people stare at it.”

Schoen’s religiosity played a part in the impeachment trial even before “The Great Kippah Debate of 2021.” Earlier this month, he requested that the trial pause at sundown on Friday so that he could observe the Sabbath. Late Monday, he retracted that request, saying that his co-counselors could fill in for him.

After hours of scrolling through Twitter to parse the hairy situation, it seems social media users could all agree on one thing: thanking Jake Tapper for bringing it to our attention.