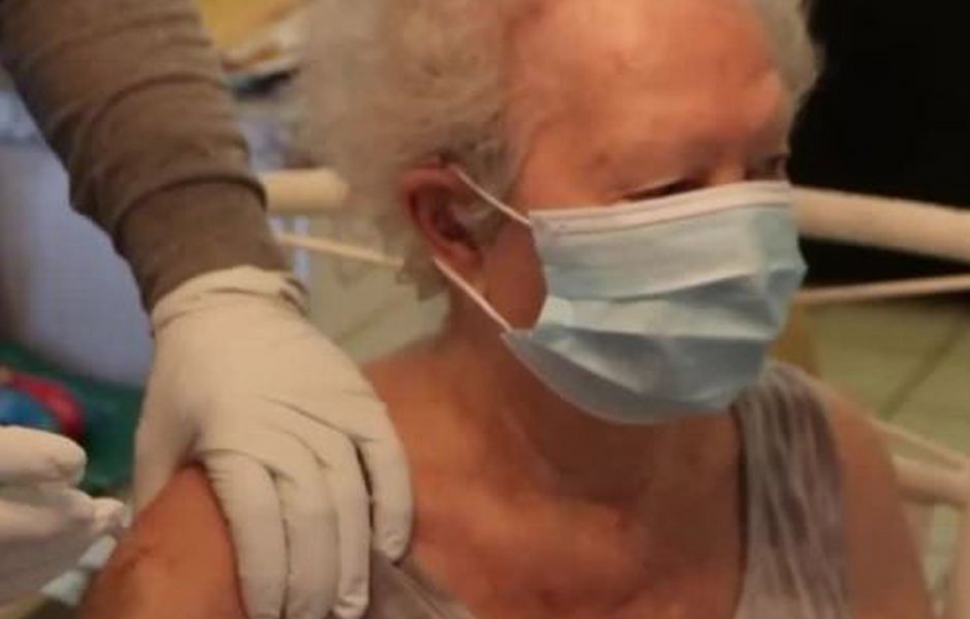 A holocaust survivor is vaccinated against COVID-19 in Palm Beach County. Courtesy of wflx.com

Noble act of mercy or “venal political maneuver?” A number of observers— ﻿including one of the nation’s leading medical ethicists — are criticizing the decision by Florida’s Gov. Ron DeSantis, a Republican, to move an estimated 750 of the state’s Holocaust survivors and their spouses to the front of the COVID-19 vaccine line.

Speaking from the pulpit of the Turnberry Jewish Center in Aventura, outside Miami, last week, the governor announced that half the initial, weekly 1,500 doses allocated for homebound seniors will go to Shoah survivors. 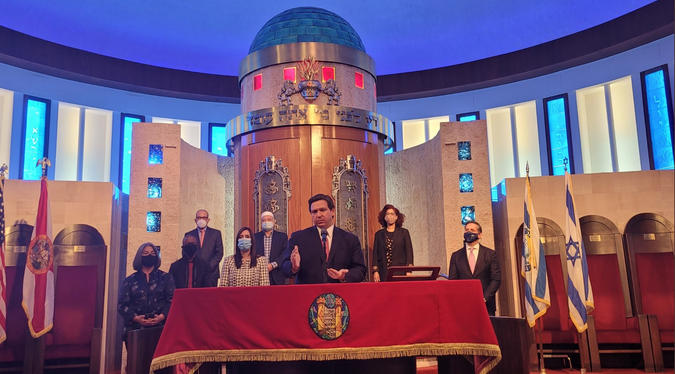 “We owe our seniors and our Holocaust survivors for serving as inspirations for so many people,” DeSantis said.

The move received some praise, but also pointed criticism, leading many to wonder if survivors aren’t the latest group to be caught in the middle of the country’s partisan skirmishes.

The first to receive the shot, at a nearby condo, was Judy Rodan, a child survivor of Auschwitz, who was born in Berehovo, Czechoslovakia. She was thought to be the sole child survivor from the town of 11,000, according to the Holocaust Documentation and Education Center, as reported in the Miami Herald.

DeSantis said the state would contact Jewish organizations to identify Holocaust survivors who want the vaccines from among the state’s estimated 12,000 survivors. A Turnberry congregation leader said the synagogue had already assisted more than 600 seniors, including 50 Holocaust survivors, to obtain appointments for the vaccine within the last three weeks.

“We are thankful that the State of Florida is working to identify and vaccinate the most vulnerable seniors in our community, including Holocaust survivors,” said Pamela C. Kancher, executive director of the Holocaust Memorial Resource and Education Center of Florida.

“We should all applaud Governor DeSantis for his genuine sensitivity and concern for the welfare of Holocaust survivors,” he said. “Given the cruel and heartless way in which the U.S. abandoned the Jews of Europe during World War II, this is the least that can be done to protect them from the deadly COVID-19.”

﻿Others took a more jaundiced view, pointing out that DeSantis, a protégé of former President Donald Trump, faces a reelection campaign in 2022, in which his handling of the pandemic is likely to be an issue. Within a week of announcing the Holocaust survivors’ priority vaccinations, DeSantis announced a similar preferential program for Cuban-American veterans of the abortive 1963 Bay of Pigs invasion of the island.

In 2018, DeSantis won the governor’s race by a razor-thin margin of 30,000 votes out of 8 million cast, against Democrat Andrew Gillum. DeSantis received an estimated 19% of the Jewish vote and the overwhelming support of Cuban-American voters.

One potential challenger to DeSantis next year is the state’s Agriculture Commissioner, Nikki Fried, who is Jewish and from South Florida.

That’s what makes some Florida politicos wonder whether DeSantis’s move is based on science, ethics, or politics.

“It would seem that there is a political motivation in some of the governor’s planning to date,” said Aubrey Jewett, professor of political science at the University of Central Florida. “One wonders why many other seniors in need, for instance, poor black residents who are more likely to be hospitalized and die, have not been targeted more aggressively.”

Of course, most African-Americans in Florida vote Democratic.

“There’s no reason to prioritize that group, other than politics,” Caplan said. “If you want to appeal for votes from the Jewish community, prioritizing Holocaust survivors makes political sense, but it makes no medical sense.”

Previous suffering, regardless of how horrific, “shouldn’t determine who goes first,” he added. “What should determine is risk of dying and the risk of being infected.”

Politico.com reported that Florida’s pandemic death toll is approaching 28,000, from nearly 1.8 million cases, ranking fourth in the nation and drawing criticism around the state, led by a drumbeat of press releases from Fried.

Repeatedly, DeSantis has refused to issue a statewide mask mandate and claimed that all lockdowns were both ineffective and costly to the economy. He went even further in this approach, blocking local officials from mandating masks or lockdowns.

Months before the Holocaust announcement, DeSantis announced at the Villages, an affluent, white, Republican stronghold, that he was pushing the state’s 4 million voting seniors to the front of the vaccination line – ahead of essential workers like police, firefighters, teachers and grocery clerks. Presumably, the senior cohort would already have included Holocaust survivors and Bay of Pigs veterans, since they are in their 80s and 90s.

Perhaps the most generous view came from Ira Sheskin, director of the Jewish Demography Project at the University of Miami. He said that in reaching out to Holocaust survivors, DeSantis “has finally done the right thing, but he only had to do this because of the incredibly poor performance until now in dealing with the pandemic as a whole, which has been chaotic at best.”