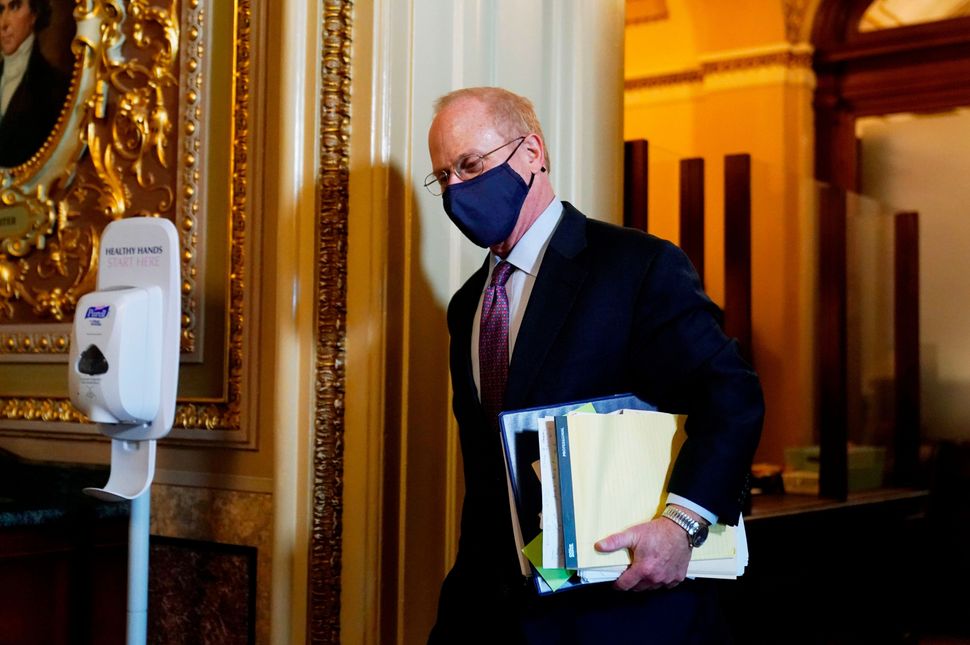 “I do not believe there has been a country in history that has held itself to a higher ethical and moral standard than Israel,” he said in a 2014 report by the ZOA. “I believe Israel represents good, right, morality and justice in a fight with evil.”

Schoen, who has generated interest for his fiery defense of Trump during Monday’s impeachment hearing (and for his manner of drinking water), has exhibited an unequivocal pro-Israel stance in both his litigation and his statements.

The ZOA is among the most combative and unapologetic of pro-Israel organizations, with its founder, Mort Klein, using an anti-Arab slur in 2018 and saying the Black Lives Matter movement is a “dangerous Soros funded extremist group of haters.” (Klein has justified his statement about Black Lives Matter by saying that the group has deemed Israel’s actions “apartheid.”)

While Schoen did not respond to a request for comment, Klein said in an interview that Schoen has never expressed concern about the ZOA or about his remarks. Klein also said, at one point, Schoen considered leaving his practice and working full-time for the ZOA.

“He has always made it clear to me how proud he is to be a part of the ZOA,” Klein said, because “we’re not concerned with political correctness — we’re concerned with truth.”

(Schoen, according to the ZOA’s most recent tax filings, works only one hour a week for the organization and is not compensated.)

In the more personal sphere, Schoen has been vocal in his condemnation of critics of Israel. He wrote an opinion piece in 2019 claiming that Rep. Rashida Tlaib of Michigan is a “rabid anti-Semite of no lesser order than a David Duke; but she is far more dangerous than an outlying fringe bigot.” The piece appeared in the Western Journal, which was essentially blacklisted under another name by Google and Apple News in 2018 and which was founded by Floyd G. Brown, who was behind the racist “Willie Horton” advertisement from the 1988 presidential race.

Schoen and Nitsana Darshan-Leitner, the director of the Israeli legal advocacy organization Shurat HaDin, represented plaintiffs in a class-action lawsuit against former President Jimmy Carter for publishing “false and misleading statements” in a 2006 book about the Israeli-Palestinian conflict, which Schoen eventually withdrew.

At the time of the suit, a spokesman for Simon and Schuster, which published the book, said the lawsuit was “frivolous, without merit, and is a transparent attempt by the plaintiffs, despite their contentions, to punish the author, a Nobel Peace Prize winner and world-renowned statesman, and his publisher, for writing and publishing a book with which the plaintiffs simply disagree.”

Schoen has also represented victims of the Palestinian Liberation Organization and the Palestinian Authority — in one case, through pretrial work, helping win plaintiffs $655.5 million under the U.S. Anti-Terrorism Act.

Those events included attacks on Israeli buses and machine gun assaults on cars.

He was also slated to defend Jeffrey Epstein before the billionaire took his own life in prison. Schoen has said that he thinks his would-be client was murdered.

In another case, Schoen wrote an amicus brief for the ZOA on behalf of the Zivostofsky family, who wanted to list their child Menachem’s birthplace as Israel on his passport, as he was born in Jerusalem. The brief runs through a myriad of other times the federal government has deemed Jerusalem a place in Israel, including in photo captions and bulletins.

“The State Department’s unsubstantiated decision should not be allowed to stand,” wrote Schoen and another lawyer, Susan B. Tuchman. “The right afforded to American citizens born in Jerusalem to have ‘Israel’ recorded as their birthplace on their passports—clearly mandated by Congress and signed into law by the President— should be upheld and enforced.”

The Supreme Court ruled in 2015 that the president has the power to determine the national status of Jerusalem, and in October of 2020, at the behest of Trump, Menachem Zivostofsky became the first Jerusalem-born American to have his birthplace listed as Israel on his passport.