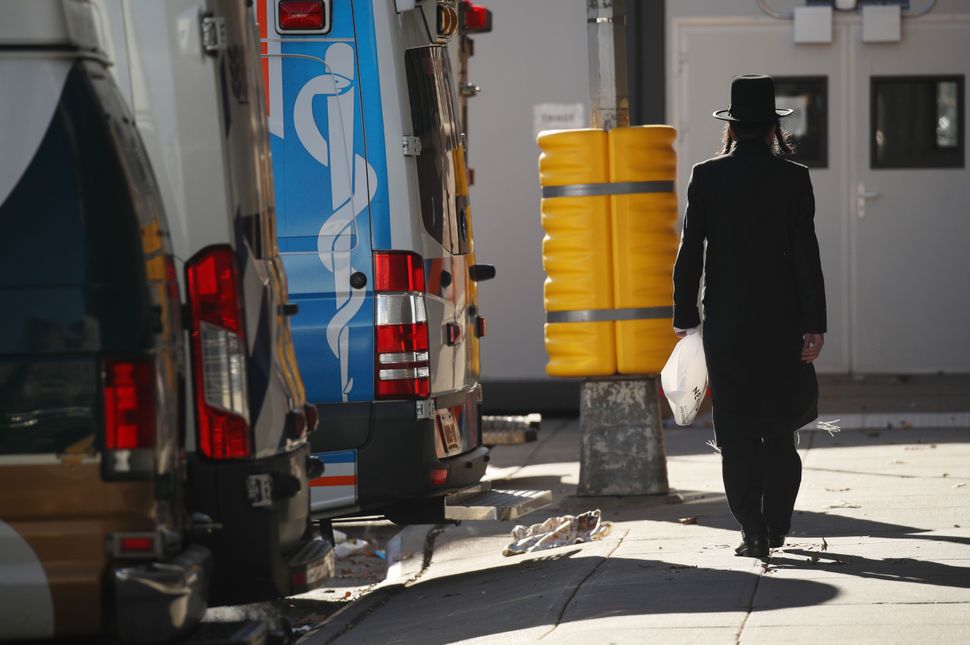 A Hasidic man walks by the Maimonides Medical Center on November 23, 2020 in the Brooklyn borough of New York City. Photo by Spencer Platt/Getty Images

When New York City Mayor Bill de Blasio released a list of 33 neighborhoods that would be prioritized for COVID-19 vaccine appointments and sites, Brooklyn’s main Orthodox neighborhoods were not on it, prompting renewed accusations that he has treated those communities unfairly in regard to the pandemic.

Borough Park, Williamsburg and Crown Heights – neighborhoods the city targeted with extra restrictions last fall because of high infection rates and places that have also been marked by anti-vaccine sentiment and social-distancing violations – are not among the “priority neighborhoods” on the city list released last month. Priority neighborhoods also receive would receive additional outreach and education around vaccines.

“Because of the messaging from the city and state leaders in the past about some of the bad behavior in the Jewish community,” said Yaacov Behrman, a Crown Heights resident, in an interview, “I would think the city would go out of their way to reassure the Jewish community there would be vaccines.”

While some Haredi residents think they’ve borne the costs of the pandemic without getting the benefits, the city said it decided on the neighborhoods that would receive the extra outreach based on a number of factors – including death and case rates, comorbidities in the neighborhoods, overcrowded housing and poverty rates during the course of last year. A city spokesperson, Patrick Gallagher, declined to say in an email what case rate and death rate would qualify a neighborhood for priority status.

Some of the ZIP codes on the list encompass neighborhoods like East New York (including the subsidized housing complex Starrett City) in Brooklyn and South Ozone Park and Corona in Queens which have been devastated by the pandemic and which are made up of vulnerable communities of color and people living in poverty.

Latino and Black residents have had, by far, the highest death rates in the city, both hovering around 300 deaths per 100,000 people compared with about half that for white and Asian residents. Poverty has also been correlated with the rates of coronavirus cases, hospitalizations and deaths.

But still, some city residents say they lack clarity about how decisions were made — the ZIP code with the second-highest death rate overall is 11354 in Flushing and Murray Hill, Queens, but that neighborhood is not on the priority list. Another source of confusion is related to more recently-hit hot spots: The fifth-highest seven-day positivity rate in the city right now is in the ZIP code 11229 – 13.84%, nearly twice the city’s most recent seven-day positivity rate – which includes parts of Gerritsen Beach, Homecrest and Sheepshead Bay in Brooklyn. But that ZIP code is not on the priority list, and has a substantial number of Orthodox Jewish residents.

And though Crown Heights and Williamsburg have a few vaccination sites, some Haredi residents feel burned after a year of mass gatherings like weddings and funerals that have garnered mainstream media attention, and subsequent lockdowns that generated protests in Borough Park in the fall.

COLLive, a news outlet for the Haredi community in Crown Heights, ran a story on Jan. 31 with the headline, “De Blasio Promises ‘Vaccines for All’ – Except Crown Heights.”

When asked at a press conference Wednesday about reconciling those neighborhoods that experienced lockdowns with the list of priority neighborhoods, de Blasio said that other neighborhoods were hit worse.

“The goal here is to reach everyone while also recognizing that what we learned, particularly, in the worst moments of this crisis in March, April is, some neighborhoods in the city had a particularly horrible experience, lost a huge number of people, and still don’t have the health care support they need,” he said. “And we’ve got to focus as well on getting the vaccine there and overcoming the hesitancy that a lot of communities feel on top of it.”

That same day, New York Gov. Andrew Cuomo announced that a mass-vaccination site will open at Medgar Evers College in Crown Heights the week of February 24.

Other Haredi residents said that the city is damned if it does and damned if it doesn’t. Anti-government sentiment is high in many of the neighborhoods right now, and a government push to get people vaccinated could backfire – and priority status could have been interpreted as additional undue scrutiny.

“Outreach? To who?” said one Haredi resident of Borough Park in a WhatsApp message, who spoke on the condition of anonymity because of fear of retribution. “To those that say the government are Hitler?”