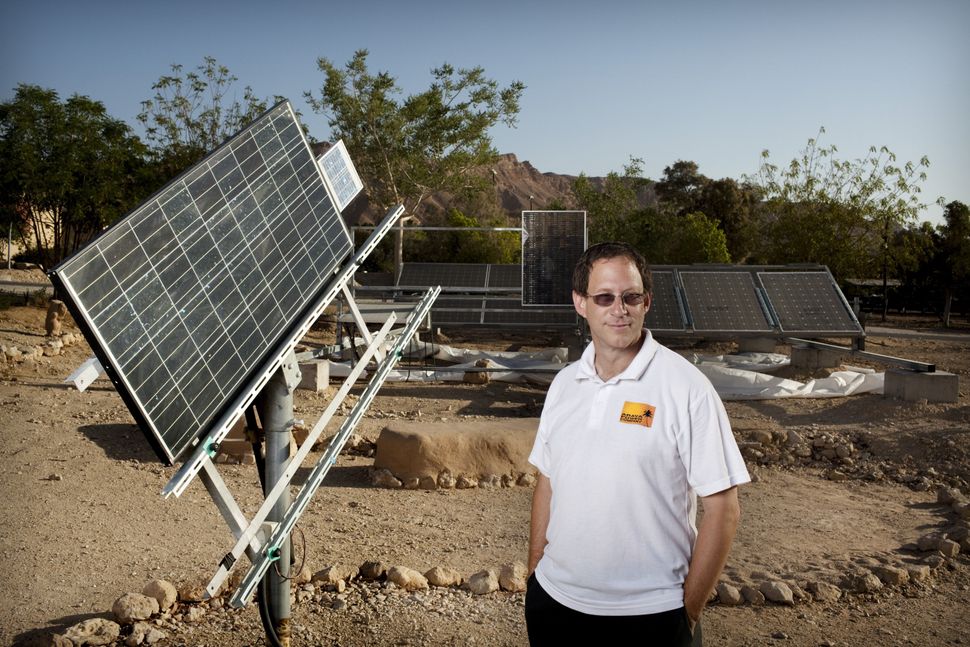 Yosef Abramowitz, president of the Arava Power Company at the company’s experimental solar site in the Arava Desert ten years ago, on June 17, 2010. Photo by Uriel Sinai/Getty Images

Yosef Abramowitz has been nominated for the 2021 Nobel Peace Prize for his groundbreaking work bringing solar power to the African continent. Today, he’s known as Israel’s solar pioneer — sometimes dubbed “Captain Sunshine” — but at heart, Abramowitz sees himself as what he’s always been: A Jewish educator.

“I still see myself as a Jewish educator [as I’m] financing and building solar fields in Africa,” Abramowitz, 57, said in an interview this week. “We may end up actually influencing more young people to appreciate the very rich change-the-world tradition that they come from, just by setting an example.”

On Monday, Israeli TV first broke the news that Abramowitz, brother-in-law to comedian Sarah Silverman and Shabbat dinner host of then-Senator Kamala Harris, was nominated for arguably the world’s most coveted humanitarian award by members of parliament from 12 African countries and Belize.

Energiya Global, where Abramowitz is the CEO and founder, espouses a vision that clean energy should not “be a luxury that only wealthy nations can afford, but will be the energy of choice for lifting people in developing countries out of poverty.” The group aims to expand to developing African countries the technologies and strategies of Abramowitz’s previous venture, Arava Power Company, which in 2011 launched Israel’s first utility-scale solar energy field. In the past six months, Abramowitz said, a region in Israel — “from the Red Sea to the Dead Sea” — became the first in the world to be powered in daytime exclusively by solar energy.

Bishop Scott Mwanza, the Africa Director for the Israel Allies Foundation, organized support for Abramowitz’s nomination. In a statement to The Forward, Mwanza said he has known Abramowitz for a “long time as my brother,” and lauded his “humanitarian heart.”

Abramowitz “wants to lift up the living standards of his fellow human beings,” wrote Mwanza, who lives in Zambia. “The Nobel Peace Prize is the best gift the world can give such a man.” 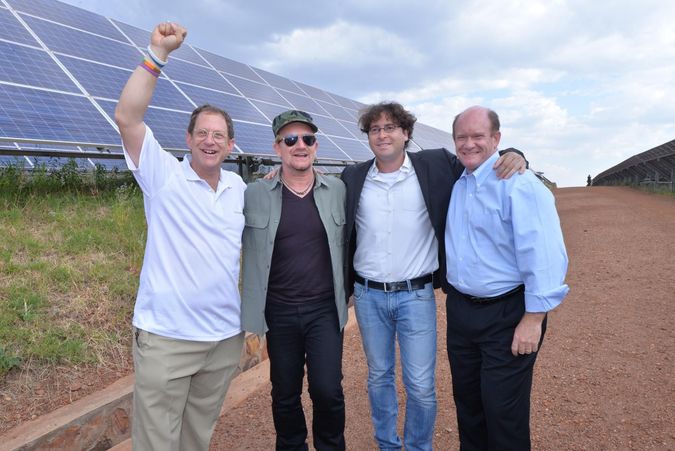 From left to right, Abramowitz, Bono, Chaim Motzen, and U.S. Senator Chris Coons, at a solar field in Rwanda, the result of President Obama’s first success story for his Power Africa program. Courtesy of Yosef Abramowitz

For his part, Abramowitz’s reaction to the news of his nomination was “overwhelming humility and gratitude” and “heavy responsibility,” he said, recalling his time studying under Elie Weisel at Boston University in the 1980s when Weisel won the Nobel Peace Prize. The renowned Holocaust survivor, activist, and writer remains a profound inspiration for Abramowitz. When he heard about the nomination, “At first, I thought of him, and that’s very very meaningful.”

“When you have a continent that has 600 million people without power, and then another 200 million burning expensive and polluting diesel, and a population that’s going to double in one generation, you have essentially an unlimited amount of opportunity to lift human dignity,” he said, “and to affirm the image of God in just millions and millions and millions of people… we’re all created in God’s image.”

To that end, Abramowitz explained, his work has four bottom-lines: an investor bottomline, a humanitarian bottomline, and an environmental bottomline. Plus, “It feels good to advance the brand equity of the Jewish people and the diplomacy of the state of Israel.” Recently, his work was featured in a video message to President Biden and Vice President Harris on the potential for expanding clean energy solutions with the U.S. and Israel.

Abramowitz’s history of serving the Jewish value of repairing the world stretches back decades. As an undergraduate in Boston, he founded his college’s South Africa anti-aparteid and divestiture movement, and in the 1980s, he was arrested twice — once for protesting for the liberation of Soviet Jews outside an embassy in Washington D.C. and another time in Jerusalem outside the 1987 World Zionist Congress, where he was protesting on behalf of Ethiopian Jewry.

And 2021 isn’t Abramowitz’s first brush with a potential Nobel Peace Prize: As the president of the Union for Council of Soviet Jews in 1997-2007, he was co-nominated for the award three times.

The news of the nomination comes just as Energiya Global announces a wide array of milestones. According to Abramowitz, the company has active solar projects in 10 different countries in Africa, including a project in Burundi in the “final stages of development,” which is partially financed by the U.S. government.

“We just finished all our documentation in South Sudan,” Abramowitz said, speaking from Liberia, where he’s working on obtaining licensing for yet another project.

He stressed that charity alone goes only so far — a “values-based business model” is necessary to solve some of the world’s most pressing problems. Abramowitz, who also said he supports divestment from fossil fuel corporations, hopes the American Jewish community will contribute to addressing the humanitarian and environmental issues he’s battling.

As for his own ambitions with the Nobel? Aside from himself, Abramowitz cited a worthy candidate for the 2021 award — “just an incredible force of nature and history, who’s raised awareness and gotten people out to the streets” on the issue of climate change.