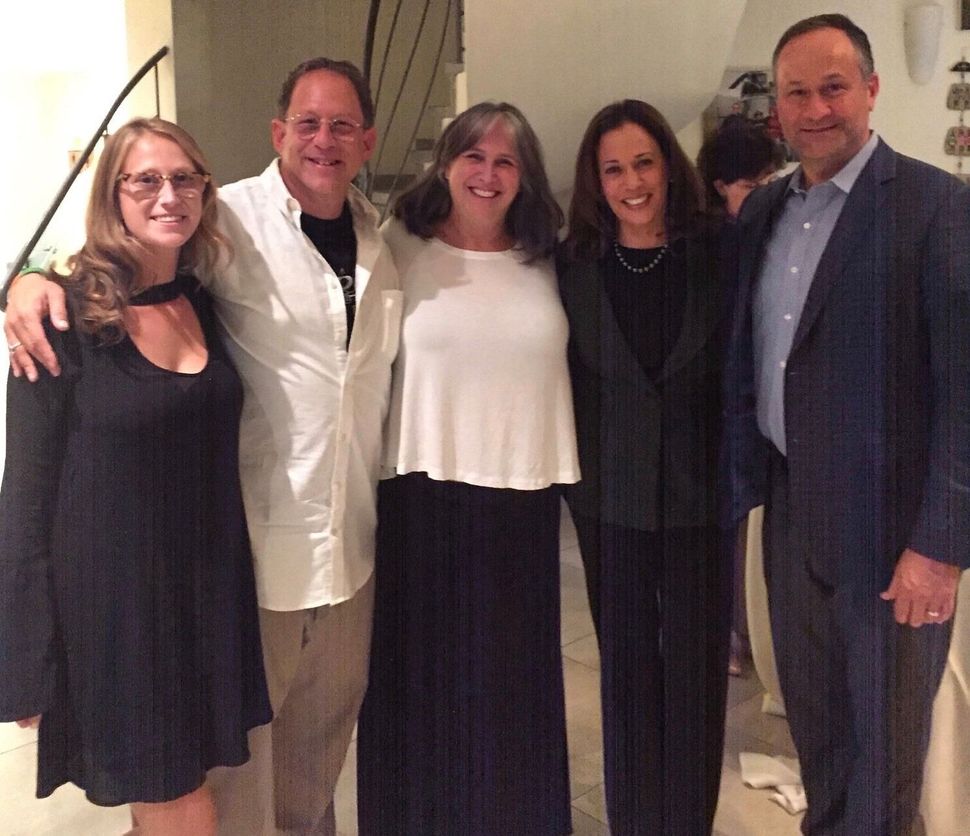 They walked in like so many other Shabbat guests who we’ve had the pleasure of hosting. Our home in Jerusalem before Corona was always buzzing with great Shabbat conversations, our table more often than not surrounded by local friends, African dignitaries, and American politicians.

While we’ve hosted many Members of Congress, Kamala Harris was our first Senator. This was in 2017, and it was a private trip, we were told, so that Doug Emhoff, her Jewish husband, could finally see the Jewish state and also experience a special Shabbat. No one had to tell us the significance; there were already whispers of a Presidential campaign.

Unbeknown to us, the Senator asked her staff to seek out a shabbat dinner that would resonate for Doug, and they presented her with the names of six families. I think we won the privilege because the Israel Senator Harris loves, and the Judaism she most identifies with, is our Israel and our Judaism: filled with good people challenging its imperfections and fighting to lift human dignity wherever we can.

They had landed in Jerusalem on Friday, late in the afternoon, changed at their hotel, and showed up with two staffers and a really good friend, Dr. Anita Friedman, bearing warm smiles and a gift.

We had some guests of our own, including Yotam Polizer and his wife from IsraAID and Saul and Wendy Singer, of Start-Up Nation fame, and four of our kids, including Adar, who had just come home for Shabbat from the Israel Defense Forces as a tank commander and sharp-shooter.

On the one hand, there is nothing remarkable about our Shabbat meals: candle lighting, angel cards, kiddush, blessing the kids, motzei. But Kamala wanted something special.

She lit the candles with my wife, Rabbi Susan Silverman. They waved in the flickering lights and whispered the blessing together. These were the candlesticks Susan’s grandmother brought out of the pogroms of Poland to America, and she shared their story, and how remarkable it is to light them in a sovereign Jewish state.

We sat around the table: Kamala sat across from Susan, Doug across from me, and everyone else was spread out. One thing you noticed about them right away: Doug loves Kamala — big time. It radiated, as they held hands or caught each other’s gaze.

Susan explained each of the rituals, and the two guests were most taken by her linking the creation story in Kiddush with the exodus from Egypt: “The purpose of creation, as I understand it, is redemption. For Jews and for all people.”

Kamala brought up solar energy and climate change. I was happy to tell her about our goal of going 100% solar daytime for Eilat and the Arava, which we achieved this year, and how we are bringing that model to African countries with U.S. government advocacy and financing.

We didn’t talk about settlements or other wedge issues on Israel. Instead we talked about how the U.S. and Israel can work together to further international development and win the climate battle.

“We have a lot to learn from you,” said the junior Senator from California. “Actually, the first commercial solar field in the world was an Israeli company that built in the Mojavi Desert and California is ahead on renewables targets and storage.”

Wine, salatim, more discussion. On foster care, the relief work of IsraAID, feminism, and our programs in Israel and Africa on solar energy, Kamala turned to Doug each time with a look that seemed to say, “See, I told you your people and traditions are really cool.” And she gave Doug a short tutorial on Hamas rockets that terrorize the residents of Sderot.

My impression is that they are essentially a Tikkun Olam interfaith family.

When you host an intimate shabbat dinner, you expand your sense of family. Kamala saved sharing her Israel-related mission for dessert. She leaned forward toward Susan.

“My goal is to hold together the center on Israel in the Democratic Party,” said the now-contender for the Vice Presidency of the United States.

She said it with conviction, authenticity and, in that moment, as a related-Member of the Tribe around the Shabbat table in Jerusalem.

Yosef Israel Abramowitz, named by CNN as one of the planet’s leading Green Pioneers, plays second fiddle to Rabbi Susan Silverman at Shabbat dinners in Jerusalem. He, like Kamala, also dreams of becoming President one day, but not of the US. He can be followed @Kaptainsunshine.