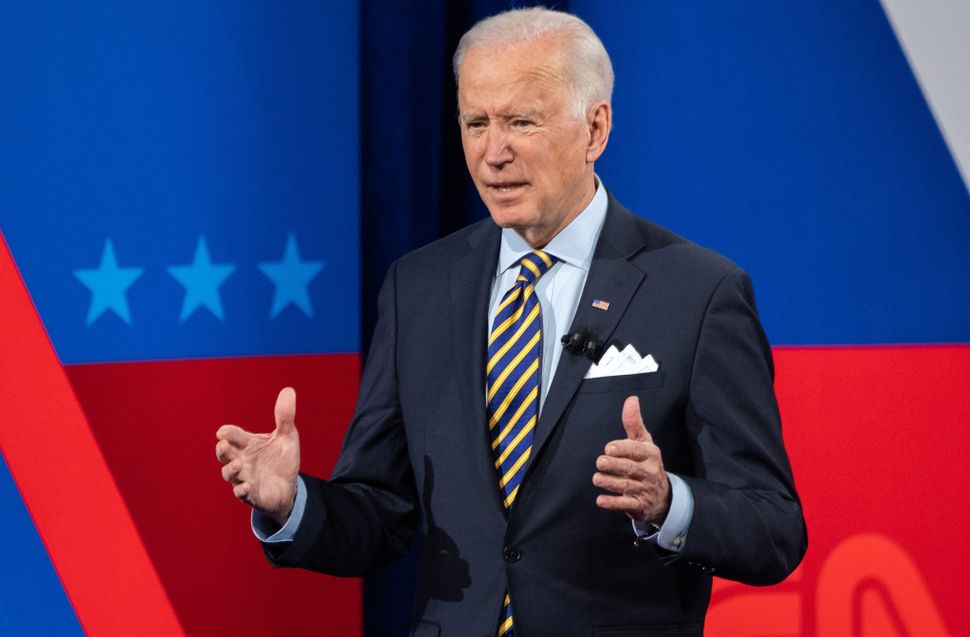 President Joe Biden engaged in a rare moment of kvelling during a live broadcast of a CNN town hall in Milwaukee on Tuesday night.

“I actually know some Yiddish,” Biden revealed during an exchange with a Jewish member of the audience.

The light remark came after the president was introduced to Joel Berkowitz, a foreign language professor and the director of the Stahl Center for Jewish Studies at the University of Wisconsin-Milwaukee.

“I’m not bad at the literature part, but after five years of French, I still can’t speak a word, so I apologize,” Biden said.

To which Biden, perhaps thinking of his time spent with Jewish relatives, replied, “I actually know some Yiddish.”

CNN host Anderson Cooper then intervened and said to the president, “It would be a shanda if you didn’t.”

In an interview with The Forward on Wednesday, Berkowitz said the moment wasn’t scripted.

“I did not expect that,” Berkowitz, 55, said. “It was kind of like the second that I had to kibbitz with the president of the United States and it just kind of came out.”

Berkowitz, who spoke on the phone after teaching a Wednesday morning class on Jewish literature, said he wasn’t particularly surprised by Biden’s response because he expected the president to know some Yiddish words since he’s been around Jewish people and has quoted the Talmud in past speeches.

He described it as a “cute and fun” exchange and insisted that the few seconds of fame and the spotlight didn’t get to his head. “I am the same person I was yesterday,” Berkowitz said, adding that he will carry on with life “unless I get a phone call from the president saying, ‘I hope you were serious about those Yiddish lessons and get on Zoom with me for a few minutes a day.’”

Berkowitz, who moved to Milwaukee in 2010 after teaching at the University of Albany and at Oxford, said that he had originally submitted two questions to CNN, the other on higher education and that the network had confirmed earlier this week that he would participate to ask a question about white supremacy. This was his first public event since the outbreak of the COVID-19 pandemic and he was thrilled to have the opportunity to go out. “It was Valentine’s Day when I got the invitation,” he recalled, ”and I said to my wife, ‘Can I invite you out on a date with the president and Anderson Cooper?’” Turns out he couldn’t have asked for more.

During the commercial break before he got to ask the question, Berkowitz sat close to the stage and the moderator turned to him and inquired about his profession, knowing he teaches foreign language. When Cooper heard that he primarily teaches Yiddish, “without missing a beat, he said he read Sholem Aleichem in 10th grade,” Berkowitz said. “I got a kick out of that.”

Berkowitz added that Cooper’s use of the word shanda “was super impressive.”

A blast from the past: Jacqueline Kennedy reading a copy of the Yiddish @Forverts pic.twitter.com/hg1UUwgaii

Born in Philadelphia and later moving to Mamaroneck, Westchester County in New York, Berkowitz didn’t grow up speaking Yiddish at home. His mother is a second-generation American and his father came to the U.S. at age 10 after his parents fled Poland early in World War II. But he heard “bits and pieces” of Yiddish when his extended paternal family got together. He joked that he probably learned more Spanish words watching Sesame Street than he learned Yiddish words at home. But the opportunity arose during graduate school when he was offered a course on Yiddish language one summer at Oxford University “and I was completely bitten by the bug,” he said. “It felt like there was some kind of collective unconscious or something that I was tapping into. It just moved me on a really deep level. I was completely smitten with the language.”

In 1995, Berkowitz spent a year on a postdoctoral fellowship at the Hebrew University of Jerusalem, doing research on Yiddish theatre while also studying Hebrew. He then traveled to the U.K to teach Yiddish for four years, followed by a nine-year tenure at SUNY in Albany.

Berkowitz said that the Tuesday night exchange, the first of a kind he’s ever had with a president, was an “opportunity” to get the leader of the free world to address the issue of white supremacy and conspiracy theories “that is deep seated in society and that came out of the woodwork,” particularly in the insurrection of the Capitol on Jan. 6. “I expect there are people in the administration, in Congress and elsewhere in the halls of power who are talking to the people who understand how those kinds of ideologies come about and how to address them,” he said.