After a year of the pandemic, the dual meaning of masks this Purim 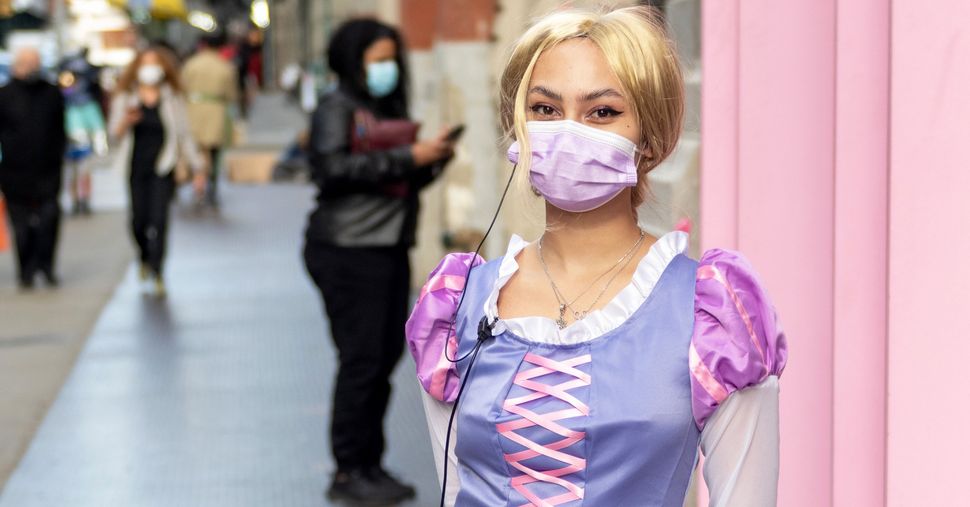 A woman dressed as Rapunzel from Disney’s ‘Tangled’ movie wearing a mask due to the coronavirus pandemic. Photo by Alexi Rosenfeld/Getty Images

Friends in his Atlanta neighborhood were delivering the traditional festive food baskets and he was afraid to open them. It was in the very early days of the pandemic when epidemiologists were still honing in on how the novel coronavirus was spreading. “I threw away a lot of it and washed my hands quickly,” he recalled.

Sarnat, an associate professor of environmental health at Emory University, may have been ahead of the curve. For many American Jews, Purim 2020 went on largely as normal, perhaps with some joking about elbow-bumps instead of handshakes during megillah readings and synagogue festivities. In some communities, the holiday is thought to have helped spread the virus – and in many, it was the last time people gathered in large groups.

Nearly a year into the global pandemic, with American deaths inching closer to 500,000 and the U.S. vaccination rate around 13% so far, Purim 2021 is particularly poignant. Those innocent in-person celebrations seem far more than a year ago. Social distancing, once anathema to Jewish observance, became de rigueur; many congregations are offering a panoply of virtual services and events this year.

And masks that mark the costumes of the day have taken on new meaning, speaking volumes for the mouths they cover.

Purim of 2020 began at sundown on Monday, March 9. Global stock markets were tumbling and a population lockdown was enforced in northern Italy where the virus was quickly getting out of control. Andrea Markewitz, a 43-year-old mother of five in Boca Raton, Florida, was concerned enough that she opted not to attend her synagogue’s large Purim gathering. Instead, panicked and anxious, she took her family to her neighbor’s house for a smaller affair. 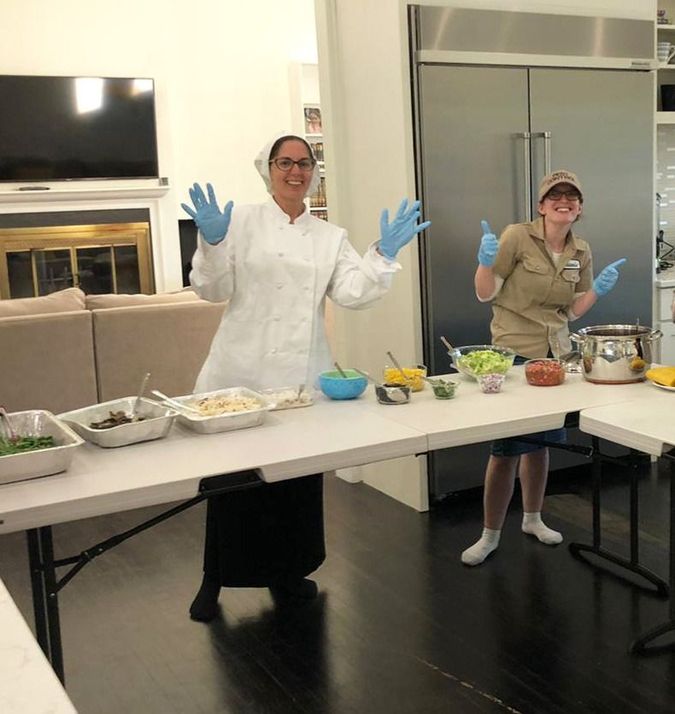 In the early days of the pandemic, Andrea Markewitz (left) and her neighbor donned gloves and served buffet style at their Purim meal in 2020.

The adults wore gloves and served the food, tacos and chili, buffet style. “We thought the kids would be the germiest so we didn’t allow them to touch the utensils,” she said.

Two days later, the number of coronavirus cases in the U.S. crossed the 1,000 mark. Tom Hanks announced he was diagnosed with COVID-19. By week’s end, much of the country began sheltering in place and it seemed the world had come to a standstill.

This Purim, which starts at sundown on Thursday, is the anniversary of “when COVID drastically, horrifically changed our lives,” said Rabbi Daniel Kraus, director of community education at Congregation Kehilath Jeshurun in Manhattan. “In many ways, we put on masks a year ago and literally haven’t taken them off.”

Kraus, 39, noted that masks are an inextricable part of the festival, calling them “one of the most public-facing elements of Purim” and a “Hallmark identifier” of the day. But now, he pointed out, the mask evokes two different moods.

“The masks of the coronavirus that we are all accustomed to wearing still represent a level of fear, but the mask of Purim is a mask of happiness,” he said. “While they are externally the same, the thinking behind them and the focus of them is so very different.”

For Rabbi Kraus, who himself recently recovered from COVID-19, both types of masks represent the same foundation – deep faith.

“In the whole story of Purim you don’t see God’s hand, you don’t see God’s name,” he noted. “Everything was topsy-turvy. Mordechai doesn’t reveal he’s a relative. Esther wears a mask herself. But Purim teaches us that salvation comes in mysterious ways. And as we celebrate this anniversary, let’s hope we can actually take our masks off, figuratively and literally.”

This year, Sarnat said he plans to attend an outdoor megillah reading at his synagogue, home to many observant Jews who work at the nearby Centers for Disease Control. He’s heard some talk that people may be avoiding inflatable costumes, since they require people to blow them up with their mouths. “I don’t know,” he admitted. “I can’t imagine that it would make much of a difference in terms of transmission.”

In Boca Raton, Markewitz is planning to again join with her neighbor to celebrate and share the Purim feast. This time, she said, they will meet in the driveway, and sit in family pods six feet apart. Her neighbor is planning to dress up as Sen. Bernie Sanders at President Biden’s inauguration, sitting in a chair and wearing a mask.

After a year of the pandemic, the dual meaning of masks this Purim