Forward readers weigh in: To yarmulke or not to yarmulke? 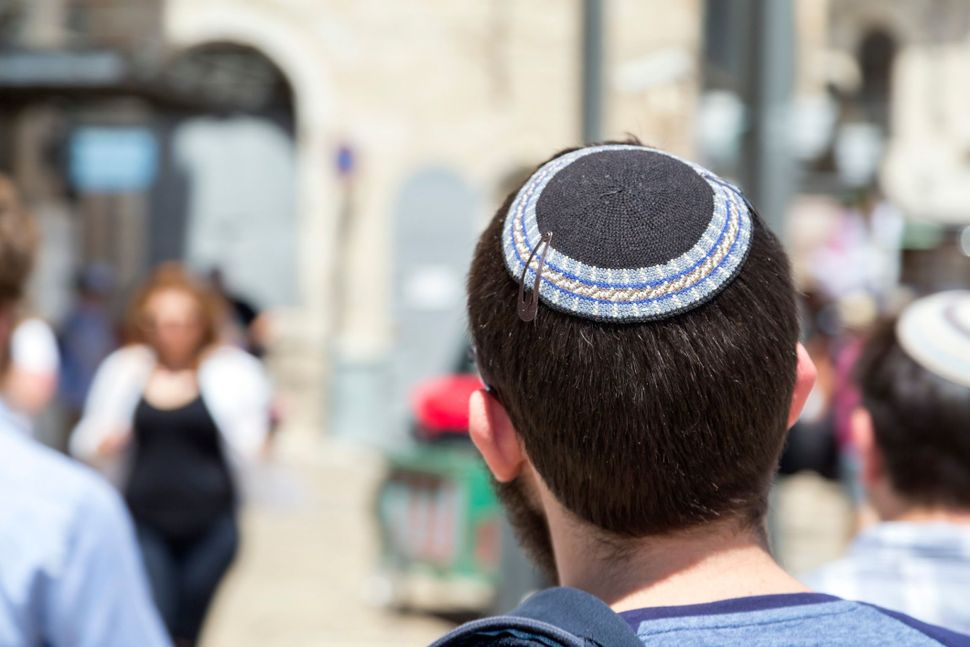 When attorney David Schoen delivered his opening remarks at the recent impeachment trial of Donald Trump, he took a sip of water and awkwardly covered his head. Schoen, a Modern Orthodox Jew who normally wears a yarmulke, was not wearing one that day. Instead, he used his hand to cover his head to recite the customary pre-drink blessing. Later that night, Schoen explained why he chose not to wear a yarmulke: “I just wasn’t sure if it was appropriate. I didn’t want to offend anyone. It’s just an awkward thing and people stare at it.”

Our News Director Benyamin Cohen weighed in, explaining that he also removes his yarmulke or covers it with a baseball cap when running errands around town. Cohen wrote that where he lives in Morgantown, West Virginia, people “are more likely to have seen a bear than a Jew.” As Cohen notes, when everyone spots you as the one, lone Jewish guy, you become a homing beacon, and it can be uncomfortable.

We heard from Schoen and Cohen, but we wanted to hear from you, our community of readers. And so we asked: Are there times and places when you choose to not wear a yarmulke? Many of you wrote to us and we wanted to share what he heard.

Nearly everyone who responded to our survey said they chose to take their yarmulke off on certain occasions. Like Schoen and Cohen, they said they did not feel comfortable wearing it when they were the only Jew in a crowd because they did not want to stand out. Some said they took it off in professional settings like a business meeting. Some readers told us that they were worried that people would mistrust them if they wore it.

The issue of safety came up repeatedly in our readers’ responses. The range of places where they felt unsafe, however, caught us by surprise. Some of our readers said they took off their yarmulke at the doctor’s office, at grocery stores and at restaurants. One person even told us that they remove it while on the New York City subway.

In our questionnaire, we were curious and wanted to know how our readers felt as they took off their yarmulke. They expressed a mixture of guilt, anger, shame, frustration and sadness. They said they felt uncomfortable when they weren’t wearing their yarmulke: Some wrote in to tell us they believed they had betrayed their Jewish identity and faith. One reader saw their choice to remove their yarmulke as giving in to antisemitism. One reader asked: “By choosing to not wear a yarmulke, am I less Jewish? By reducing the visibility of Jewish people, am I helping prejudiced people win?”

While many of our readers told us stories about taking off a yarmulke, some told us tales of the opposite. We heard from a soldier in the U.S. Army who proudly wears his yarmulke when he is on duty. He said he does not wear his yarmulke for religious purposes. Instead, he uses it to send a message: he is a Jew, and he wants to be treated with respect. It is his way of fighting against antisemitism. (He said his superiors even encouraged him to wear the yarmulke.)

At the end of the day, many of our readers choose to not wear a yarmulke in certain situations because they are uncomfortable with the attention that it brings. But in the words of one respondent who donned a yarmulke in a congressional chamber, “Wearing a yarmulke can be a Kiddush Hashem [sanctification of God’s name] by showing how one can be a proud Jew and also involved in general society.”

Malkah Bressler is the Social Media Editor of The Forward.

Forward readers weigh in: To yarmulke or not to yarmulke?