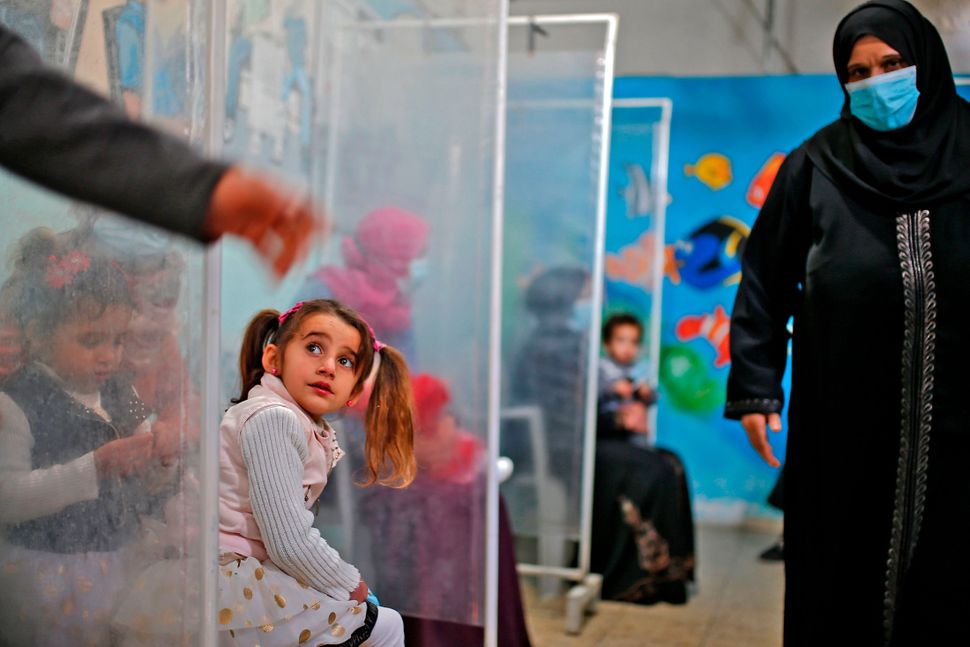 Palestinians wait at a clinic run by medical charity Doctors Without Borders in Gaza City on February 22. Residents of both Gaza and the West Bank have struggled to receive COVID-19 vaccines, while Israel leads the world in the per capita rate of vaccination for its citizens. Photo by Getty Images

So, who was right?

That depends who you ask. The American Jewish Committee called Che’s joke “false” and “dangerous,” and Anti-Defamation League chief Jonathan Greenblatt said it played into antisemitic tropes. Both start from the premise that Israel is only required to vaccinate its own citizens, and note that shots are available to the 20% of Israelis who are not Jewish. Arab Israelis lag behind in vaccination rates — as do ultra-Orthodox Jewish Israelis — but it’s not true that Israel is not offering them vaccines.

“The Israelis are saying, ‘You’re good enough to be a state to handle your own vaccines but then you’re not really a state when it comes to everything else.’”

Then what’s the debate — Che was wrong, right?

Many people assume Che was actually referencing Israel’s failure to provide vaccines to Palestinians living in the West Bank and Gaza, who are not Israeli citizens. Israel has faced criticism for months for shutting the 4.9 million Palestinians who live under Israeli occupation from its successful vaccine campaign.

OK. But why would Israel be expected to vaccinate Palestinians?

An occupying power is required to provide medical care for the people living under its control, according to the Geneva Convention. Liberal Jewish groups like T’ruah and IfNotNow, and Palestinian and human rights advocates, say that because Israel is occupying the West Bank and Gaza it is required to provide vaccines to everyone living there — not just to the Israeli settlers living in the West Bank, as it has done.

Right. The Oslo Accords, signed between Israeli prime minister Yitzhak Rabin and Palestinian leader Yassir Arafat in 1993 and 1995, laid the groundwork for a Palestinian state by creating the Palestinian Authority to manage civilian affairs — including public health — in most of the West Bank and Gaza. The 1995 agreement states that the Palestinian Authority is responsible for vaccinating its population and keeping up with “internationally accepted standards.”

The Israelis argue that because the Oslo Accords gave Palestinians autonomy over major cities in the West Bank and Gaza, those areas are no longer under Israeli occupation and so the Geneva Convention does not apply.

“This is not a Talmudic problem you’re going to have to unwind by reading text.”

“Israel has no legal responsibility to donate vaccinations, or vaccinate, Palestinians in the West Bank and Gaza,” Joel Singer, an Israeli attorney who drafted much of the Oslo agreements, said in a recent interview. “This is not just something that I’m inferring — it’s written there.”

That settles it for many on the Israeli side, though some like Singer, who no longer works for the government, still support transferring vaccines to the Palestinians out of goodwill and pragmatism.

Hm, so this is a debate over whether you think the Oslo Accords or the Geneva Convention apply?

Even if you rely on Oslo, many critics say, Israel should still be helping vaccinate Palestinians. In a letter from T’ruah to the Israeli government signed by over 200 Jewish clergy, the organization cites a provision in the vaccination section of the Oslo Accords that “stipulated that epidemic control would be a joint responsibility.”

Yara Asi, a lecturer at the University of Central Florida who studies public health in the West Bank, notes the vaccines listed in the footnotes of the agreement are for diseases like measles, which were affordable and widely available at the time of its signing. She argues that the vaccine provision was not meant to apply to providing brand new, expensive and scarcely available vaccines like the ones that have been developed for COVID-19.

OK. Well in any case shouldn’t we be going off of Oslo? The two sides agreed to it and, unlike the Geneva Convention, it was actually tailored to the situation in Israel and Palestine.

That’s one way to look at it. But while it doesn’t have an expiration date, Oslo wasn’t really meant to govern the relationship between Israelis and Palestinians for decades. It was originally intended to be replaced with a final status peace agreement within five years, and with negotiations stalled it hasn’t always been adhered to by the Israelis. The Israeli army violated Palestinian autonomy during the Second Intifada to conduct security operations in West Bank cities, and it has failed to allow the Palestinian Authority to run its own population registry and restricts trade, contrary to what some say was provided for in the agreement.

Diana Buttu, a former advisor to the Palestinian Authority, said that Israel is selectively reading Oslo to shirk its responsibility to provide help during the pandemic.

“The Israelis are saying, ‘You’re good enough to be a state to handle your own vaccines but then you’re not really a state when it comes to everything else,’” Buttu said.

Things were complicated further by Palestinian leaders’ decision not to request vaccines from Israel in the fall, waiting until their efforts to secure them through the World Health Organization, the Gulf States and Russia fell short. Asi, the health researcher, said that because Oslo created the Palestinian Authority, officials are reluctant to break from it.

“They’re ultimately a political body and they want to maintain their legitimacy,” Asi said. “So they’re going to say, ‘We got this, we’re going to figure it out.’”

This all sounds complicated — but once we figure out which agreement applies to the vaccination issue, that will resolve things?

“This is not a Talmudic problem you’re going to have to unwind by reading text,” said Aaron David Miller, one of the top U.S. negotiators during the Israeli-Palestinian peace process in the 1990s. “Even if you find a way to resolve who is responsible, there’s no international set of judges who are going to rule in one party’s favor or another.”

In other words, there is no enforcement mechanism. Israel is more powerful. It has the vaccines and it will decide whether or not it wants to share them with the Palestinians.

Why wouldn’t it want to share them with the Palestinians?

That’s a great question. Israel is sending vaccines to allies like Guatemala, Honduras, the Czech Republican and Hungary, as well as Syria, but has offered just 5,000 vaccines to the Palestinian Authority, which has received fewer than 40,000 doses total.

Many observers point to the March election for part of the reason why.

“It has never ceased to amaze me how Palestinians are talked about like they’re not regular people.”

Ayelet Shaked, the far-right former justice minister, said Israel should bar vaccines from entering Gaza until Hamas returns the bodies of two Israeli soldiers, calling Israel’s decision to allow a small number of Russian vaccines into the enclave “a shame and a disgrace.”

There’s also what some consider a longstanding Israeli bias against the Palestinian healthcare system. Singer said that the vaccine provisions in the Oslo Accords were intended to ensure the the Palestinian Authority maintain public health after taking control of major population centers.

“The Israeli concern was that once the entire health system would go to the Palestinian side they might lessen the standards, resulting in all kinds of old diseases already controlled in Israel — suddenly you would have an outbreak of polio disease,” Singer said. He said he did not know why Israelis believed vaccination rates would drop.

Asi said that attitude is part of a “dehumanizing framing” that makes it hard to convince the Israeli government to provide urgent aid like vaccines during a pandemic.

“It has never ceased to amaze me how Palestinians are talked about like they’re not regular people — as if Palestinians want their children to have polio — to what? Stick it to Israel?” said Asi, who was born in Palestine. “It’s just painful to hear assumptions that we don’t value life, and liberty, and college, and relationships, and love, just like any other population would.”

This feels bleak. What happens next?

The Palestinians are working to secure more of the Russian Sputnik vaccine and will receive enough doses through Covax, an international system to provide vaccines to poor countries, to vaccinate about 20% of its population.

But experts think there’s little chance that they will make headway on convincing Israel to do anything beyond providing small batches of vaccines in a piecemeal fashion.