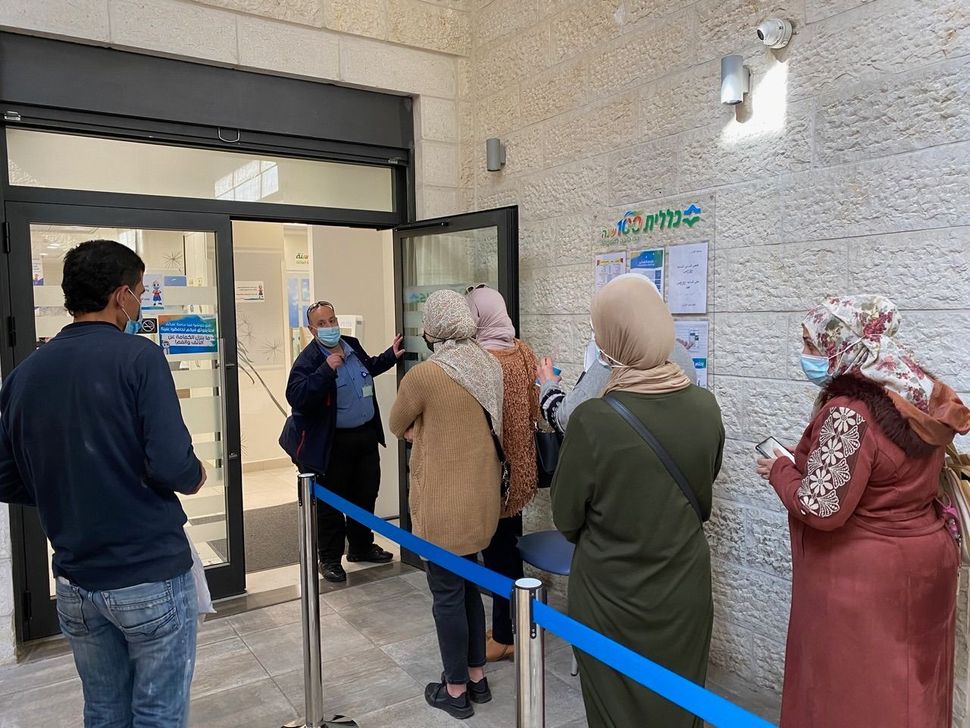 Patients waiting for vaccinations at a health clinic in the East Jerusalem neighborhood of Beit Hanina. By Sam Sokol

Standing outside of a clinic in East Jerusalem, Rashdi Jasser seemed worried. While Jasser, 47, was eager to get the COVID-19 vaccine, he said that many of his fellow construction workers have dismissed government warnings about the dangers of coronavirus, calling it “nonsense” and refusing to wear masks.

“The corona is difficult and I need to be careful for the sake of my parents and family,” he said. “I don’t want them to die.”

But Jasser’s desire to get vaccinated makes him part of a distinct minority among Israel’s Arab citizens. While the country has garnered international headlines for its speed and success in getting its 9 million people inoculated, Arab-Israelis have lagged behind. On Tuesday, the health ministry reported that 23% of Arab-Israelis had received at least one dose of the Pfizer vaccine, compared to 33% of Haredi Jews and 49% of other Jewish Israelis.

(Overall, 43% of the population has begun the vaccination process.)

The gap has closed somewhat since Israel began the vaccinations in late December; initially, Arab participation was so low, that thousands of Jewish Israelis traveled to Arab towns to obtain unused shots before they were discarded.

Experts said there are multiple explanations for the unequal participation in the vaccination program, including widespread distrust of the government among Palestinian citizens of Israel and a lack of Arabic-language outreach and education about the vaccine’s safety.

Polling conducted prior to the rollout of the national campaign found that overwhelming majorities of both Jewish and Arab Israelis had reservations about the vaccine. But while government officials have boasted of a wide-ranging campaign intended to reassure people of the drug’s safety — with millions of shekels spent on advertisements, online misinformation monitoring and other efforts — critics say the Arab sector has remained relatively neglected.

At the end of 2020, Ayman Odeh, the leading Arab member of Israel’s Parliament, wrote to the health ministry complaining of a “complete absence of a campaign to encourage vaccination among Arab citizens in the Arabic language and according to content adapted to the characteristics of Arab society.”

Nihaya Daoud, a professor of public health at Ben-Gurion University, said Israel’s government has long engaged in “systematic discrimination” by failing to run awareness campaigns in the Arab sector.

Since the beginning of the pandemic, she said, the health ministry has published dozens of pages of Hebrew content about the virus on its website but only “one or two pages” in Arabic, allowing misinformation to go unchallenged in many communities.

Asked about criticisms of its approach to the Arab sector, a health ministry spokesperson said that the government has produced “information adapted to Arab society in Israel” since the beginning of the crisis, including videos, billboards, leaflets and children’s brochures. The spokesperson — who answered questions sent via email to a general ministry account and did not sign by name — said the ministry had worked with the government’s advertising bureau and three outside public relations firms focusing on different segments of the Arab population. “Information videos are published on Arabic television and on social networks [like] YouTube, Facebook, Telegram and are distributed by groups on WhatsApp,” the spokesperson said, adding that and the ministry’s website is regularly updated with vaccine information to match its Hebrew counterpart.

Aiman Saif, who is coordinating the government’s pandemic response for the Arab sector, agreed, saying that the health ministry has done outreach through both traditional and social media, as well as directly with local officials and leaders. The ministry’s YouTube page, for instance, contains multiple Arabic-language advertisements and testimonials touting the vaccine. But even though the ministry has made a concerted push to reach this sector, he acknowledged, “it’s not enough.”

There is still “a lot to do,” Saif said. “There are people who still don’t believe in corona” and “you have to convince them there is a virus crisis.”

For example, Jihan, a resident of the East Jerusalem neighborhood of Beit Hanina who spoke on the condition her last name not being used, said that she had postponed getting vaccinated because she was scared that it could “change your DNA,” a common trope on social media.

In a poll released last fall, the Israel Democracy Institute found that 15% of Israel’s Arab citizens believed that the government could adequately manage the pandemic, compared to 29.5% of Jewish Israelis.

Thabet Abu Rass, co-executive director of the Abraham Initiatives, which promotes Arab-Jewish relations, attributed this distrust to decades of unequal government services in Arab towns, including a lack of policing, which has been blamed for high crime rates.

When, after years of ignoring the needs of its Arab citizens, the government suddenly comes and says “get vaccinated, it’s good for you,” people are naturally skeptical, Abu Rass said.

Dr. Ali Gibrene, who was helping administer the vaccine at the East Jerusalem clinic where Jasser got his shot last week, said that while increasing numbers of residents are seeking shots, the distrust is still palpable in the neighborhood, with many patients saying they believe the pandemic is a plot to “control us.” 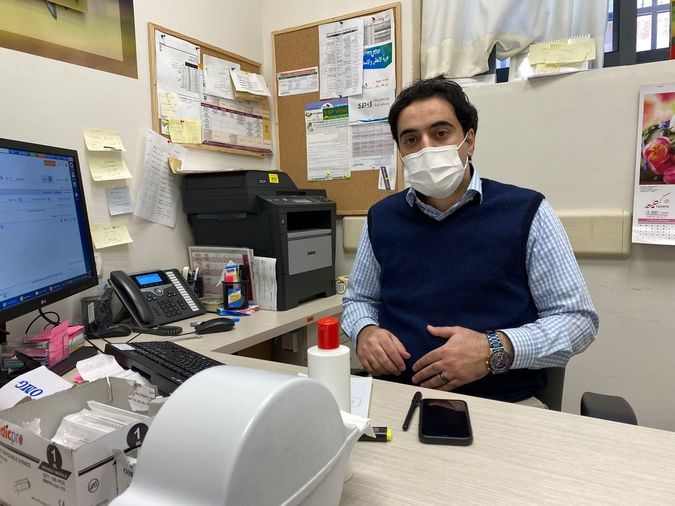 Dr. Ali Gibrene believes says that the Israeli government needs to step up its efforts counter fake news about vaccines circulating in the Arab community. By Sam Sokol

Beyond outreach, there are infrastructure issues that also complicated the rollout in Arab areas.

In East Jerusalem, for example, residents of neighborhoods cut off from the city by Israel’s security barrier had limited opportunities to get vaccinated until last week, when a new site opened near the Palestinian village of Qalandiya. In Arab towns across Israel, many residents initially also found themselves with limited access to vaccines.

Saif, who had previously served as director of the Economic Development Authority in the Minority Sector, said that the four primary national HMOs, which are handling most vaccinations on behalf of the government, initially focused on large cities and struggled to serve remote locations.

“In the beginning we had very limited stations for vaccinations in Arab villages or towns,” with only “five or six” vaccination centers serving Arab-majority municipalities across the country, said Saif. However, over the course of the past two months, that number has been increased to more than 50, plus some 30 buses serving as mobile vaccination stations.

The HMOs and government “solved this challenge,” Saif said.

Over the past month, the government has reported that the percentage of Arab citizens over the age of 60 getting the vaccine has increased to 70% from 51% (still less than the 81% of older, non-Haredi Israeli Jews). That improvement, Saif said, is not as much or “as fast as we wanted.”

Gibrene, the East Jerusalem doctor, said that while he is seeing a growing number of patients seeking the vaccine, he is still concerned. He is already thinking ahead to the mid-April start of Ramadan, the Islamic month of fasting, which typically involves large nightly gatherings for meals as well as communal prayers.

He said it is in every Israeli’s interest to help the Arab sector. “If we want herd immunity,” he noted, “how can this be successful if sectors aren’t vaccinated?”