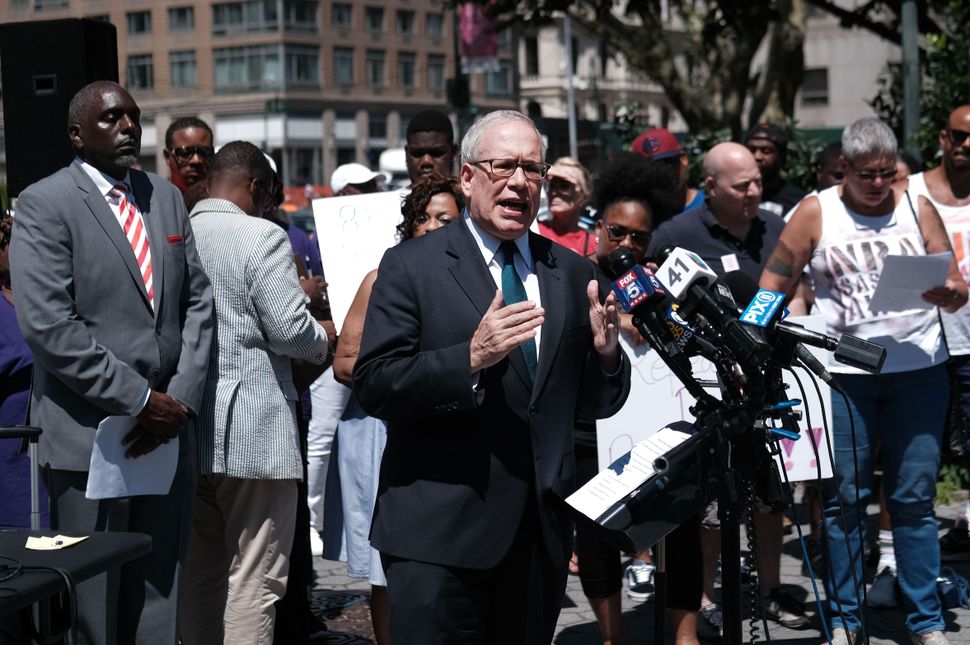 Stringer, the city’s comptroller, was asked in an interview with Jewish Insider to address concerns in the Jewish community about the pro-BDS stance of his two prominent backers, State Senator Julia Salazar and City Council candidate Tiffany Cabán. “I don’t know if they’re pro-BDS,” Stringer responded, playing coy about a hot button issue in the mayoral election. “I don’t know that.”

Stringer also raised some eyebrows when he endorsed Tiffany Cabán in the close race for Queens District Attorney in 2019, against Melinda Katz, a longtime Democratic politician. Cabán ultimately lost that race and is now running for the City Council.

Stringer, who is Jewish, told the Forward in a recent survey that he is opposed to BDS “principally because I believe it is a barrier to direct negotiations that are the best way to achieve a just and peaceful resolution of the conflict.” At a mayoral forum last week hosted by New York Jewish Agenda, eight of the 10 participating candidates repeated their assertion that they oppose the boycott movement.

But his progressive allies have been very clear like other DSA members — on the record — about their support of BDS.

“I think that boycotting and demands for divestment – the BDS movement – are tactics that are reasonable for critics of the state to use in seeking to end the military occupation of the West Bank and Gaza,” Salazar told the Forward on Thursday.

Salazar added that while she’s not involved in the BDS movement, “I think it’s a completely acceptable non-violent resistance tactic.”

Cabán responded last year to comments made by Rep. Ritchie Torres — now co-chair of Andrew Yang’s mayoral campaign — who claimed that the DSA support of BDS “will rot the progressive movement” from within. “At the core of our movements is liberation. Queer liberation. Black liberation. Palestinian liberation,” she replied. “What will rot us from within is if we abandon our struggles for justice and freedom.”

A Stringer campaign spokesperson said the candidate was speaking in the context that their positions are not a litmus test for endorsements. “He knows he is not always going to agree on every issue with his endorsers,” the spokesperson said. “But his stance on BDS has been clear.”

Salazar said on Thursday that she has no issue with Stringer’s position on BDS. “I work with plenty of people whose stance on BDS differs from mine,” she said. “I think our differences of opinion on this are inconsequential to our ability to work together.”

Meanwhile, Andrew Yang reportedly sought to clarify his strong stance against the boycott movement in a mayoral forum hosted by the Muslim Democratic Club of New York on Wednesday night.

In an OpEd for the Forward last month, Yang described the BDS movement as “rooted in antisemitic thought and history, hearkening back to fascist boycotts of Jewish businesses.”

At the virtual forum on Wednesday, Yang was asked whether he would apologize or retract his assertion. “My view on BDS is that because of its failure to disavow certain organizations that have expressed violent intentions toward Israel, that I disagree with it. But I have complete respect for people who have a very different point of view,” Yang explained. According to Politico, Yang further said that he doesn’t have an issue with individuals or activists “making a case for what they think is right,” and that his OpEd probably “confused those two.”

Yang also said he would be happy “to sit with Palestinian leaders, activists, folks who are engaged” and is “eager to learn” about their positions.