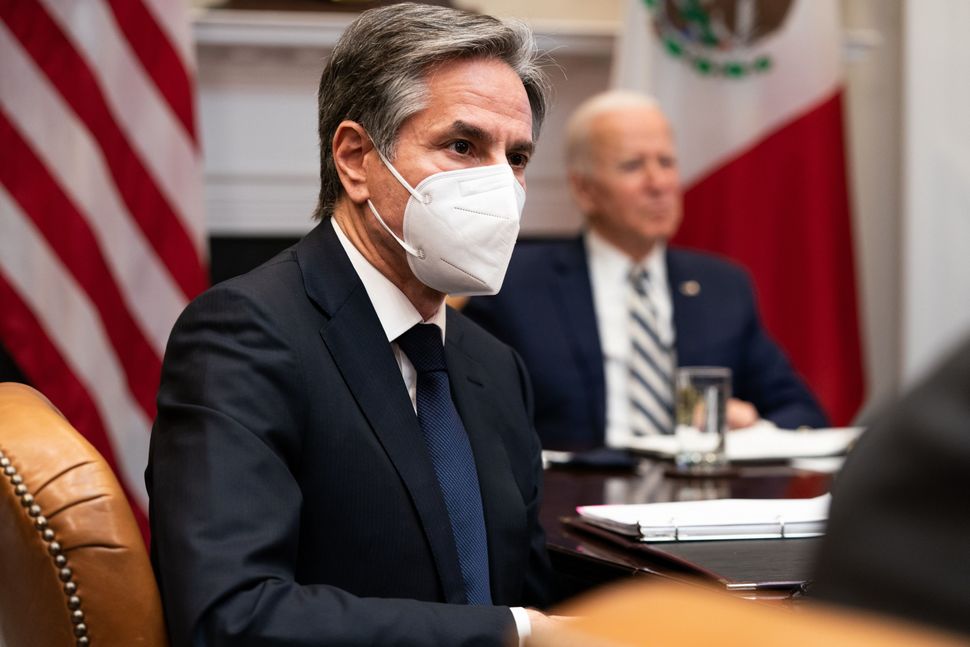 The Biden administration “enthusiastically embraces” a controversial definition of antisemitism that has divided the American Jewish community in recent months, according to the text of a February letter from Secretary of State Tony Blinken published by Jewish Insider late Monday.

In the letter to the American Zionist Movement, Blinken said the administration supported the International Holocaust Remembrance Alliance’s working definition of antisemitism and its attached examples, which progressive Jewish organizations have argued conflate criticism of Israel with antisemitism.

The letter makes it all but certain that Biden’s special envoy for antisemitism will rely on the definition.

“We are eager to work with allies and partners to counter Holocaust distortion and combat anti-Semitism and other forms of intolerance abroad while we strengthen our efforts at home, including redoubling our efforts to counter violent extremism,” Blinken wrote in the letter.

The State Department did not immediately respond to a request for comment.

Since President Joe Biden was elected in November, establishment Jewish organizations like the Conference of Presidents of Major Jewish Organizations, the Jewish Federations of North America and the American Jewish Committee have called on the administration to use the definition domestically – including to combat antisemitism on college campuses.

But Blinken’s endorsement comes amid a campaign against the definition by Jewish organizations like IfNotNow, a group focused on opposing the Israeli occupation, which held a protest outside the Capitol Tuesday morning calling on Biden to focus on far-right antisemitism.

“We know this won’t keep us safe,” IfNotNow wrote on Twitter in response to Blinken’s endorsement of IHRA. “We’ve seen how it’s only been used by the right to curb the free speech of Palestinians and their allies.”

IfNotNow and other critics – including J Street, and the Reform Movement, which endorsed the definition but said it should not be used in a legally-binding manner – point to the definition’s attached examples, which largely focus on Israel and describe “denying the Jewish people their right to self-determination” and “applying double standards” to Israel as examples of antisemitism.

The definition’s supporters say its use as a best practice for governments or other institutions, like universities, that are committed to combating antisemitism and note that it has been adopted by dozens of countries around the world since its creation in 2016. But during the last year of the Trump administration and in the early weeks of Biden’s presidency, it has emerged as a litmus test over whether the fight against anti-Jewish bigotry should include cracking down on offensive criticism of Israel or focus instead on far-right extremists.

William Daroff, chief executive of the Conference of Presidents, said the letter helped emphasize what he said was the definition’s broad support within the Jewish community.

“The definition is the consensus view, not just of the international and American Jewish community, but frankly of the world — of the experts who are looking at it,” Daroff said in an interview. He said the endorsement by Blinken would push back against the narrative that the definition is “this outlier or some sort of hammer, rather than the important tool that it is.”

Blinken’s language in the document was more measured and did not describe criticism of Israel as a form of antisemitism, instead citing “Holocaust distortion” and “violent extremism.” It did state that the U.S. “will continue to be a strong partner in fighting efforts to delegitimize” and “isolate” Israel.

Still, the letter makes it all but certain that whoever Biden names as special envoy for combating antisemitism — the federal government’s most prominent position focused on the issue — will rely on the definition in some form.

Blinken’s relatively brief note to the American Zionist Movement did not specify what his support for the definition would mean in practice. His note came roughly three weeks after a lower-level State Department official told a European conference that “the Biden administration embraces and champions the working definition.”