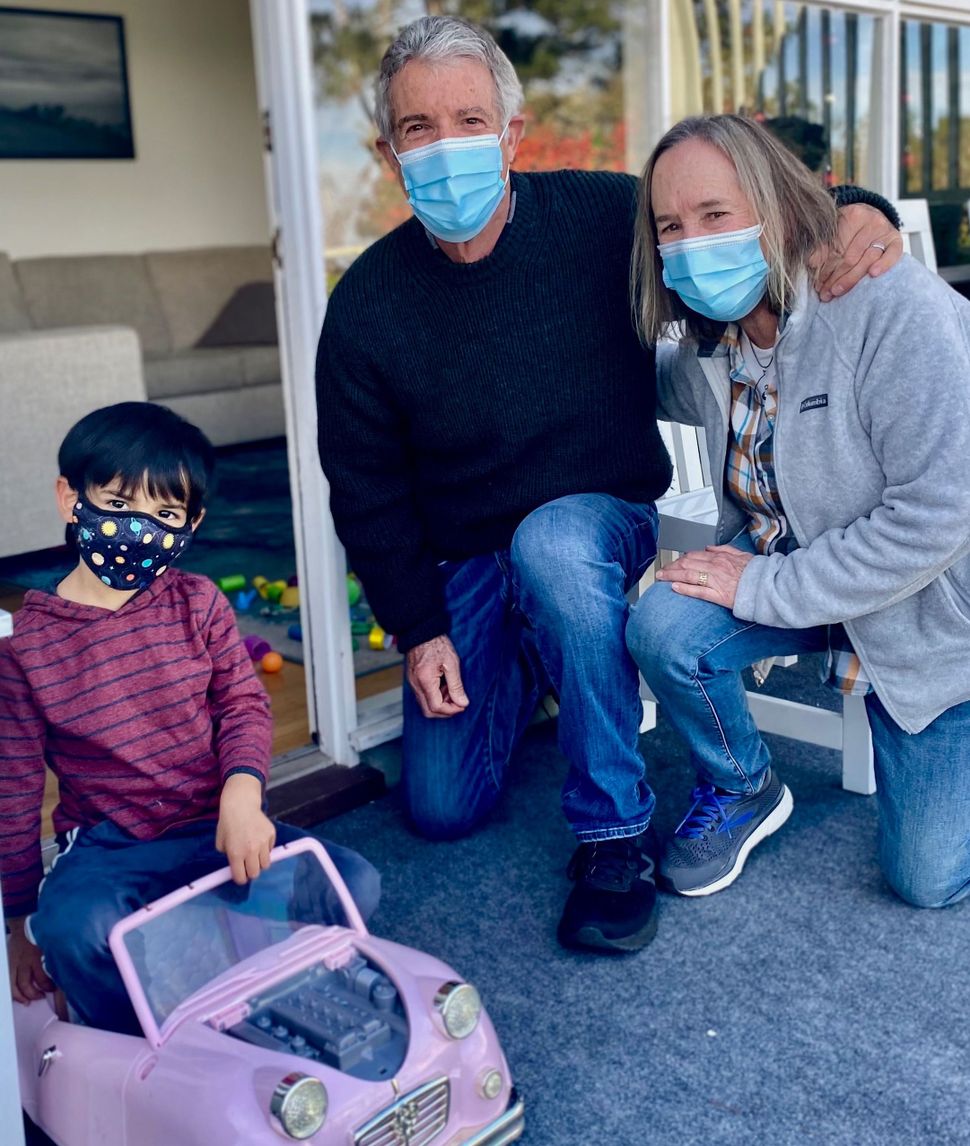 John and Ellen Moir playing outdoors and masked with their three-year-old grandson.

Ruth and Jerry Kirschner haven’t seen four of their grandchildren, ages 7 through 12, since January 2020. “This is the age when you want to see them,” Ruth said. “They’re young. They understand we can’t be with them, but they’re always like, ‘How much longer? How much longer?’”

Thanks to the COVID-19 vaccine, the Kirschners can finally say it won’t be much longer. The retired couple, based in Chicago, normally visit with their Boca Raton, Fla. grandkids at least three times a year. But amid the pandemic, as social isolation became a public health mandate and cross-state travel an unwise medical risk, they’ve spent the last 15 months hundreds of miles away. Now, with their second vaccine doses administered, they plan to fly out to Florida in a couple of weeks — just in time to hide the afikoman and hear their youngest ask, “Why is this night different from all other nights?”

For Passover 2020, Lidia Epel had already booked flights to visit her daughter and grandchildren. “But Passover came and the pandemic started,” Epel, 79, said. “I still have that ticket, I never came.”

The last time the New York-based grandmother had seen her teenaged twin grandkids was in 2019. After two vaccine doses and the proper waiting period, “I decided I’d had enough of not seeing my grandchildren,” she said. On Feb. 10, Epel flew to Florida, rented a place near her daughter and has been there ever since.

“It was very emotional,” she recalled of seeing her grandchildren for the first time in so long. “They have changed.” 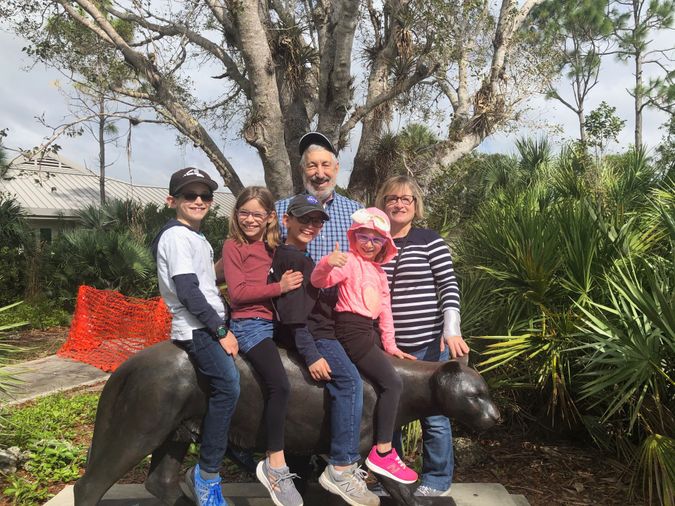 Chicago-based Jerry and Ruth Kirschner visiting their grandchildren in Florida shortly before the pandemic outbreak. Courtesy of Kirschner family

Last year on Passover, Ruth Kirschner said, “It was just the two of us at home.” With her four Chicago-based grandchildren — aged 3, 7, 9, and 11 — she’s tried to prioritize outdoor activities. And when the midwest’s weather made that impossible, she and her husband turned to brief indoor, masked and distanced gatherings. Two weeks from now, all that can finally change.

“They’ve made a reservation for a sleepover at our house,” she said. “Popcorn, movie, ice cream — it’s all in the works.” Jerry Kirschner, 73, interjected: “It’s two weeks away.”

The lost year: ‘We’re never getting it back’

Ellen and John Moir (pictured at the top of this article) have spent the past year visiting with their son and grandsons — one born just weeks before the pandemic hit — every other weekend masked and outdoors. The weather in California makes the 45-minute drive from Santa Cruz to Monterey worth it for porch-only visits, but there’s something important missing for the retired couple.

“We haven’t hugged or kissed the boys in a whole year,” Ellen, 71, said. “That’s been one of the hardest things.” As their older grandson turns four in a few weeks, John admitted that he and his wife began to feel the weight of the “lost year.” “We’re never getting it back. Oh my goodness, we don’t want to wait any longer.” 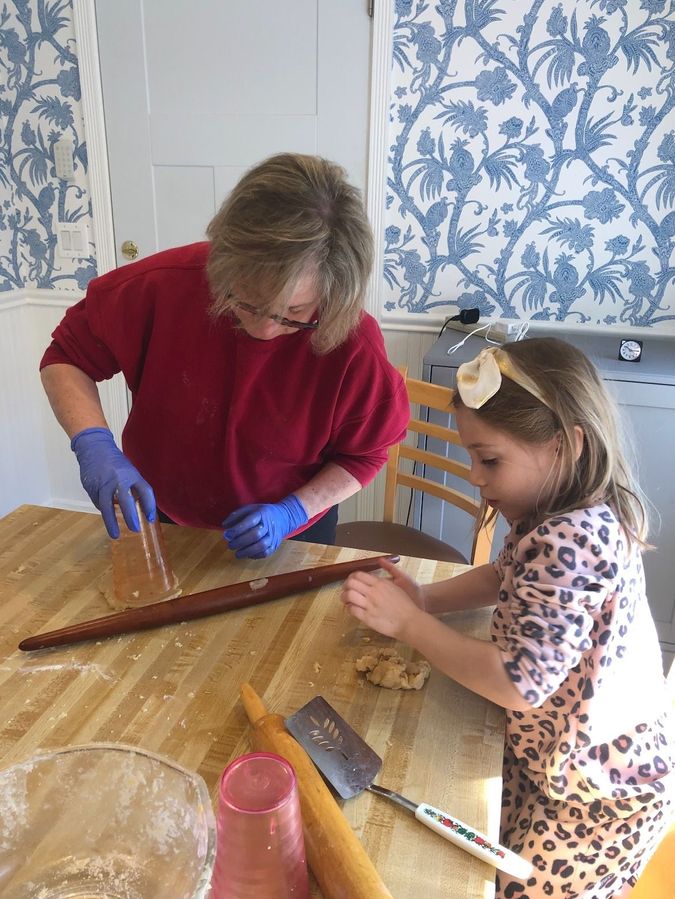 Ruth Kirschner baking hamentashen with her granddaughter before Purim 2020. It was the last time the two have seen each other. Courtesy of Kirschner family

So on March 17, after their allotted waiting period post-second-dose has passed, “we’re giving some kisses away,” the grandmother said. They recognize, the couple explained, that even with both doses of the vaccine, some risks remain and mask-wearing continues to be CDC recommended protocol. But after a year of warning their beloved three-year-old grandson to “not get too close to grandma and grandpa,” hugging him is a risk they feel is worth taking.

“We’re not sure what it’s going to be like,” John said. “We’re going to have to let the kids be the guide… it’ll be as strange for them as it is for us.”

At the end of the day, for these vaccinated grandparents, despite knowledge of the risks inherent to flying to visit family or taking off their masks to kiss their grandchildren, they’ve come to the conclusion it’s a risk they’re willing to accept.

“The more I read, the more I understand that really there’s no instructions,” Ruth Kirschner said. “We don’t go anywhere, we don’t go to restaurants, we do curbside grocery pickup. So it’s really a scary step to take.”

The vaccine, after all, is not full proof, she said: A small percentage of fully vaccinated people can still become infected with the coronavirus.

“Well, they’re telling us things that they would like us to buy them.”