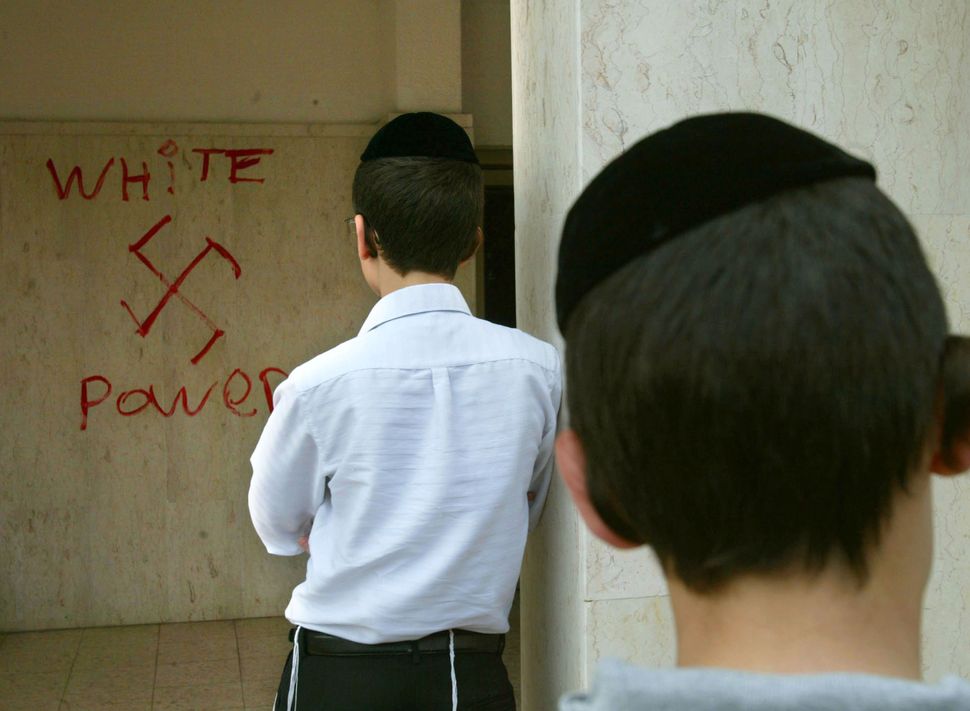 Jewish boys look at anti-semitic graffiti which was sprayed on the walls of a synagogue March 5, 2006 in Petah Tikva, near Tel Aviv, in central Israel. Photo by Getty Images

A task force promoted by leading liberal Jewish leaders released a new working definition of antisemitism on Monday that challenges the one being promoted by Jewish establishment groups. The definition states that most criticism of Israel and Zionism is not antisemitic.

“Whether speech or conduct about Zionism and Israel is antisemitic should be based on the standards for speech or conduct that apply to antisemitic behavior in general,” states the definition, which was drafted by a group of scholars and Jewish leaders affiliated with the Knight Program in Media & Religion at the University of Southern California. The work of the group, called the Nexus Task Force, was endorsed by more than 100 prominent Jewish leaders in a September letter to President Joe Biden.

“You can think of IHRA as the mishanah and this as the gemmorah.”

The new definition could serve as an alternative to one from the International Holocaust Remembrance Alliance that has been promoted by several major American Jewish groups who want Biden to use it to enforce federal anti-discrimination laws, although the group behind the new document said it is not intended to be used in IHRA’s place.

“The big mistake people are making about IHRA is that it’s the final word,” said Jonathan Jacoby, who directs the Nexus group, “and there are many words and perspectives.”

The IHRA definition has been endorsed by the American Jewish Committee, Jewish Federations of North America and the Conference of Presidents of Major American Jewish Organizations. Left-wing Jewish groups including J Street, Bend the Arc and IfNotNow have criticized the IHRA language, saying it is often used to crack down on legitimate criticism of Israel.

Other organizations, including the Union for Reform Judaism and the Anti-Defamation League, have both publicly backed the IHRA definition while urging caution in its application and stating that it should not be codified into law.

The IHRA definition states that “denying the Jewish people their right to self-determination” and applying standards to Israel “not expected or demanded of any other democratic nation” could be examples of antisemitism.

In contrast, the Nexus definition addresses the same issues with more qualifications. It states that it is antisemitic to “advocate a political solution that denies Jews the right to define themselves as a people, thereby denying them — because they are Jews — the right to self determination.” It states that holding Israel to special standards is antisemitic when applied “solely because it is a Jewish state,” but not in other cases.

For example, the Nexus document states that “paying disproportionate attention to Israel” because it “has a special relationship with the United States and receives $4 billion in American aid” is not necessarily antisemitic. “Harsh criticism of Israel for its policies and actions,” the task force says, “including those that led to the creation of Israel” are not automatically antisemitic.

In a nod to the increasing polarization within the Jewish community overs Israel politics, the new definition also states that it is antisemitic to deny the “Jewish identity of certain Jews because they are perceived as holding the ‘wrong’ position” on Israel.

Jacoby said that the Nexus definition was only meant to be a resource for those seeking to combat antisemitism and that neither it, nor the IHRA definition, should be treated as the primary or exclusive definition of anti-Jewish bigotry.

“You can think of IHRA as the mishnah and this as the gemara,” he said, referring to rabbinic commentaries on the Torah.

The 13-member group that drafted the definition includes Rabbi Jocee Hudson of Temple Israel of Hollywood and Prof. Dov Waxman, director of the Nazarian Center for Israel Studies at the University of California, Los Angeles. Jacoby said all members were volunteers.

The task force is part of a website called “Israel and Antisemitism” that hosts resources meant to push back against what it states are attempts to “politicize and exploit antisemitism and Israel” by the political right in the United States. The September letter endorsing the website and its resources, which now include the Nexus definition, was signed by a broad spectrum of Jewish leaders mostly affiliated with the political left or Democratic Party.

The definition did not exist when those leaders signed onto the letter to Biden and Jacoby said they had not reviewed it.