From Walla Walla to Kansas City, how small Jewish communities survived the pandemic 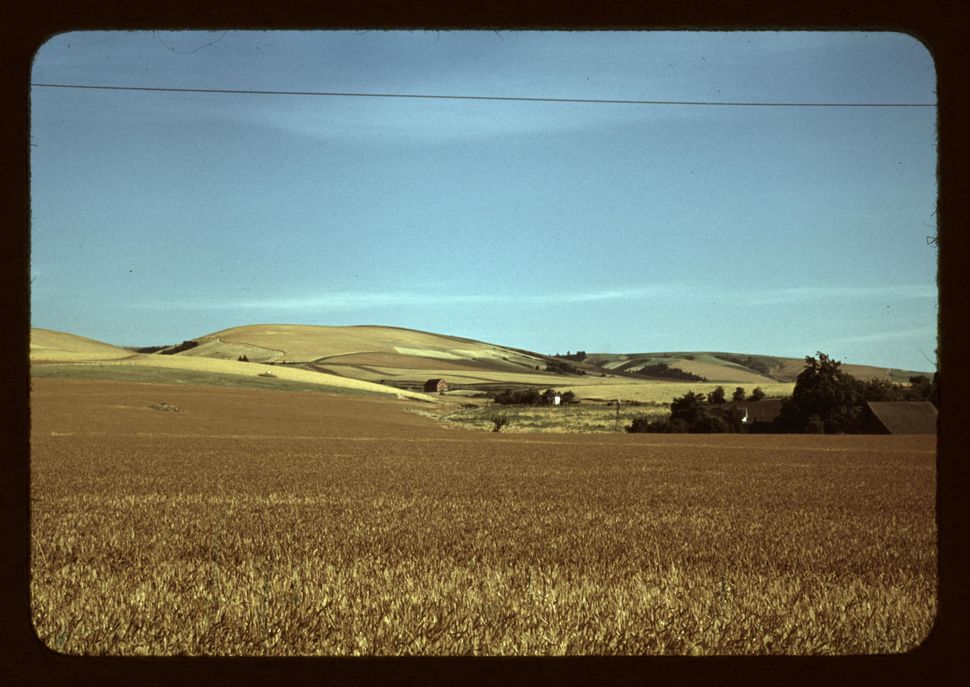 The lone synagogue in Walla Walla, Washington, is housed in a repurposed convenience store and run by volunteers. The synagogue, Cong. Beth Israel, has never provided the array of programs available at those in larger cities, but for decades it’s been the only Jewish institution serving a vast swath of the state and parts of neighboring ones.

“We’ll get people from two hours away who say, ‘Hey I’m Jewish but I’m kind of disconnected because I’m out here in rural Oregon,’” said Evan Heisman, the synagogue’s board secretary.

“People can check out bigger congregations but they’re not going to see 15 or 20 familiar faces in gallery view who know them.”

But when the coronavirus pandemic forced houses of worship to close a year ago, most non-Orthodox synagogues went online and overnight the Jews of Walla Walla and other small communities had unprecedented access to myriad options for Shabbat services, Torah study and even Hebrew school for kids run by other, larger Jewish institutions.

For example, the town’s Jews could now access the 50 monthly online programs at Temple De Hirsch Sinai, the flagship Reform congregation in Seattle, a four-hour drive from Walla Walla. They could also leave the Pacific Northwest altogether and watch Hillary Clinton address Temple Emanu-El in New York City or participate in The Kitchen’s Rosh Chodesh “Womyn’s Group,” normally held in San Francisco; later this month, they — and you, and everyone everywhere — can tune into “Let My People Flow,” a Passover yoga class from Sixth & I, the experimental Washington, D.C. synagogue.

The specter of small Jewish communities being forced to compete with such a diverse array of slickly produced content has some leaders worried. Rabbi David Wolpe of Sinai Temple in Los Angeles started hosting a popular weekly Torah study class on the social media app Clubhouse during the pandemic and said online Jewish content could discourage people from returning in person once their local shul reopens.

“It’s a supplement to see things online but it’s not a substitute,” Wolpe said. “It is my hope that we will go rushing back into each other’s arms once we can.”

There is good reason to think that Jews around the country will do just that. Heisman and the leaders of other synagogues in parts of the country with few Jews report that while some of their members have taken advantage of online offerings from far and wide, they are also clamoring to return to their local sanctuaries.

Walla Walla’s Beth Israel directed members elsewhere for holidays like Rosh Hashanah and Yom Kippur, but Heisman said attendance remained strong for the synagogue’s weekly virtual candle lighting, monthly Torah study and book club. Those who have stepped back from the community during the pandemic, he said, have not abandoned Beth Israel for a big-city congregation — they just “want something in person.” 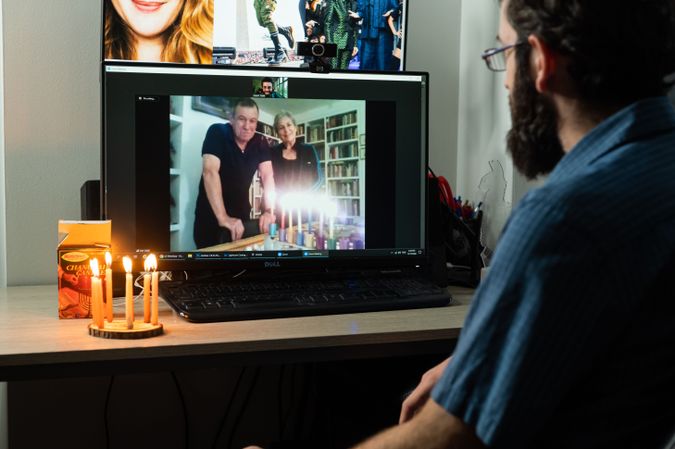 ‘You have to unmute!’

About 1 million American Jews live in areas with fewer than 5,000 other Jews, but there has been little modern research about their rates of synagogue affiliation or where and how they connect to their Jewish identity. The last major nationwide survey that attempted to look at these communities focused on Jews living outside of the nation’s 40 largest cities, a metric that would count the 30,000 Jews of Hartford, Connecticut — the 230th largest city — but leave out the 2,300 Jews of Oklahoma City, a top-40 metropolis.

Matt Boxer, a Brandeis University professor who studies far-flung Jews, said that those in small communities tend to read more books about Judaism, listen to more Jewish music and visit more Jewish websites than their big-city counterparts because the local offerings are often so meager.

But the intimate nature of tiny congregations can compel people to show up in a way they might not in New York, where Boxer compared attending services to a spectator sport.

“You show up somewhere and watch other people perform Jewish rituals,” Boxer said. “Whether you’re there or not doesn’t really matter.

In small communities, local Jews often take personal responsibility for ensuring their synagogue remains vibrant. That resonates in Walla Walla, where the roughly 30 families who belong to Beth Israel are integral to its operation. Heisman, who works as an engineer for the federal government, initially joined the synagogue eight years ago to make sure his children had a connection to Judaism and is now a senior leader at the congregation.

Beth Israel is so dependent on individual members that its Torah study sessions have dropped from twice to once a month during the pandemic because one teacher was uncomfortable leading the class over Zoom.

Members of small congregations have also taken extraordinary steps to make sure everyone can join services online. While Central Synagogue in Manhattan City, which serves 2,300 families, has a web page and dedicated email address for anyone who has trouble accessing their livestream, congregants of Temple Israel in West Lafayette, Ind., pay home visits to elderly members who needed assistance connecting to Zoom.

Rabbi Karen Fanwick, who leads the Indiana congregation, said that personal touch has paid off: 90 of the congregation’s 100 families attended Yom Kippur services online, and some older people have even started to help lead services from home.

Most small Jewish communities that remain active are centered on Reform congregations, like those in Lafayette and Walla Walla, because the Orthodox requirements for kosher food and a minyan of 10 men to hold full prayer services make it difficult for observant Jews to live in scattered corners of the country.

But in places like Kansas City, where Jews make up roughly 20,000 of the city’s more than 2 million residents, Orthodox Jews have also found ways to keep their community vibrant this past year.

Alejandro Aptilon, an architect who lives outside the city, set up a “home shul” for his wife and kids in the family’s living room, but also made sure to attend services at the local Chabad as long as the weather allowed.

“The minyanim never stopped,” Aptilon said. “We stayed outside of the synagogue and they opened one of the windows and we could hear outside.” 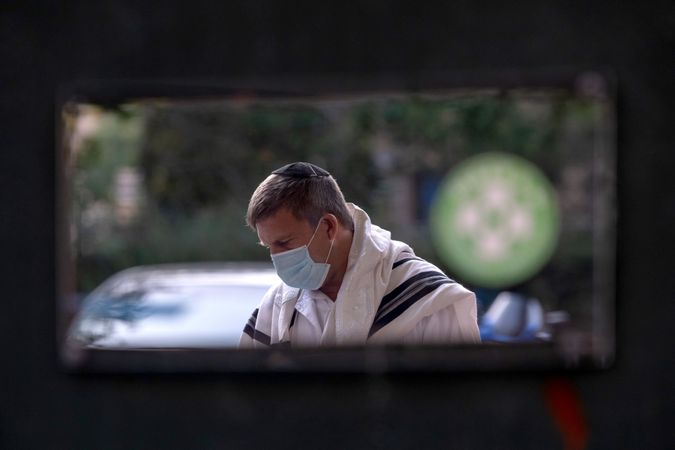 An Orthodox Jew wearing a mask prays during an outdoor Yom Kippur services on the Upper West Side in New York City last fall. Photo by Getty Images

Some of Aptilon’s fellow members of the Kansas City tribe have started taking advantage of online Jewish programming from outside the region.

Martha Gershun belongs to New Reform Temple in town, and until March of last year, all she watched online was Netflix. That has changed. “One day one of us said, ‘Oh my God we could go to synagogue anywhere,” recalled Gershun, 64, a nonprofit consultant.

“We are a people that really emphasize belonging even more than believing.”

She and her husband have tuned into services in Oklahoma City, where their former rabbi now presides over a new congregation, and sometimes livestreams Central Synagogue on Shabbat because they like the music. But they only do that after watching their own congregation’s services.

“It’s not like praying, it’s like going to a concert,” Gershun said of Central, whose rabbi, Angela Buchdahl, is also a renowned cantor. “It’s not meaningful to me to say the misheberach or the kaddish with a community that’s not my own — but the music is gorgeous.”

Gershun’s experience mirrors what the leaders of small and medium Jewish communities believe helps them compete with the fancy video effects and wide array of content coming out of hubs like New York City and Los Angeles.

“Bigger congregations have a bigger budget and can spend more on production and make a more pleasing aesthetic experience,” said Rabbi David Wirtschafter of Temple Adath Israel in Lexington, Kentucky. “What no other place can do is give our congregations — our community members — a virtual platform to see each other.”

Wirtschafter said that some of his congregants have, indeed, been attending online programs at Jewish institutions around the country, but that it has not led to any drop-off in participation at their home synagogue. Like other small congregations, Adath Israel does services by Zoom so that participants can see each other, as opposed to a traditional livestream. Congregants chat with one another following Shabbat services, a tradition that Wirtschafter said had become a highlight of the service.

“People can check out bigger congregations but they’re not going to see 15 or 20 familiar faces in gallery view who know them, who know their story, who have the same weather and the same public schools,” Wirtschafter said.

Especially for the non-Orthodox, rabbis and others said, much of what draws Jews to synagogues and other activities is a desire for community. Wolpe, the rabbi teaching Torah on social media, said that may be why there is no Jewish parallel to the kind of televised religious programming that has been popular for decades among evangelical Christians.

“We are a people that really emphasize belonging even more than believing,” he said, “and a lot of what sustains that is the kind of person-to-person contact, aid, caring, that our synagogues exemplify.”

From Walla Walla to Kansas City, how small Jewish communities survived the pandemic