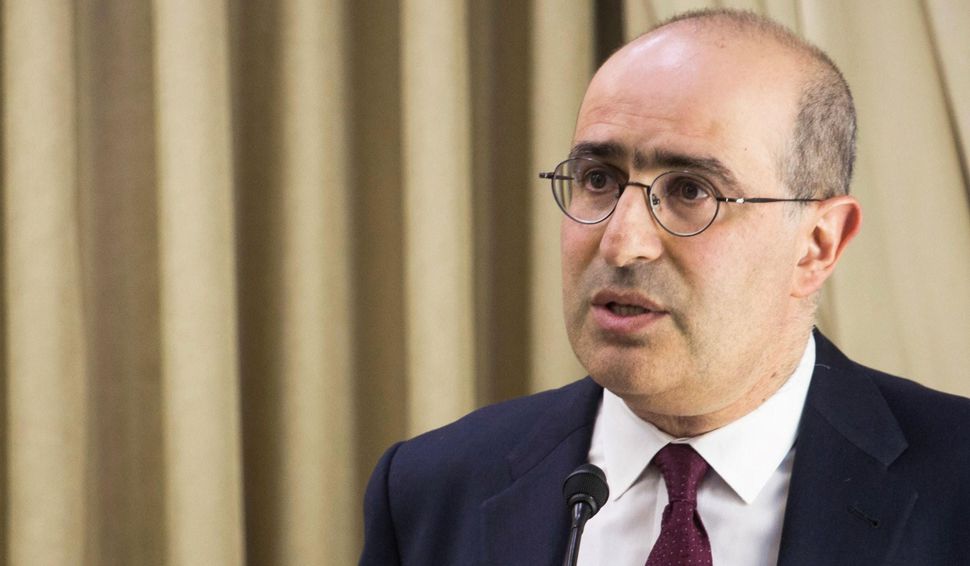 The Jewish Community Relations Council of New York announced the appointment of a new chief executive on Wednesday that drew mixed reaction from the Jewish community and prompted a debate over past activities.

Gideon Taylor, executive vice president of EWKA, a commercial real estate company in New York, was selected to succeed JCRC’s longtime executive Rabbi Michael Miller, who is stepping down in June after more than 36 years at the helm of the influential organization.

Taylor previously served as executive director of the Claims Conference, which negotiates with the German government on funding for Holocaust survivors, and as the operations chair of the World Jewish Restitution Organization, a nonprofit that aims to return property to Holocaust survivors. Taylor was one of the leaders at the Claims Conference when some of its employees perpetrated an elaborate $57 million fraud scheme.

The JCRC represents the Jewish community to New York government officials and counts more than 50 local Jewish groups as members. It organizes the annual “Celebrate Israel” parade in Manhattan and sponsors trips to Israel for elected officials and business leaders.

The appointment drew immediate praise from mainstream Jewish and pro-Israel groups, as well as from Israel Nitzan, the acting Israel Consul General in New York. William Daroff, chief executive of the  Conference of Presidents of Major American Jewish Organizations, said he got to know Taylor over the years and described him as “a trusted advisor and confidant who knows the New York civic and political scene very well.” The JCRC shared on Thursday a list of Jewish leaders praising the pick – including Stu Eizenstat, who served as former President Barack Obama’s advisor on Holocaust issues and was a special negotiator of the Claims Conference; and Abe Foxman, former national chair of the Anti-Defamation League.

But picking Taylor as Miller’s replacement also raised some eyebrows. As previously reported by the Forward, five of the nonprofit’s employees received kickbacks between 1994 and 2009, which resulted in multiple convictions. Taylor worked at the conference for 10 years and left approximately eight months before the fraud was discovered in 2009. He wasn’t implicated in either the subsequent FBI investigation or the internal probe.

“It is surprising that JCRC would pick as their new head the individual who literally had oversight over the largest fraud ever perpetrated in a Jewish organization in American history,” said one Jewish leader, speaking on the condition of anonymity to discuss the choice more freely. “During a time when public officials place a premium on transparency and accountability, it seems like JCRC is going in the opposite direction.”

Others have expressed concern that the group will make itself irrelevant with Taylor at the helm.

A local Democratic Jewish leader said on the condition of anonymity that as someone who has been involved in and around politics for years, he has never even heard of Taylor. “It seems to me that an old, white millionaire and a real estate executive is exactly the wrong choice at this time,” the official said.

Cheryl Fishbein, JCRC’s president, maintained that Taylor’s role at the Claims Conference was irrelevant to his new position. “Nearly a year after his tenure as executive vice president, fraudulent payments to Holocaust-survivor imposters were discovered,” Fishbein said in a statement to the Forward. “Taylor was not implicated in any way in FBI and internal investigations.”

Fishbein noted that during Taylor’s tenure at the nonprofit, “over $6 billion in compensation to Holocaust survivors and allocations for survivor needs was distributed” and the “prominent supporters in the Holocaust restitution community continue to vouch for his character and leadership skills.”

Miller served as executive vice president and CEO of JCRC since 1986 and has earned the respect and admiration of public officials and local politicians, becoming an influential leader in the New York Jewish community. He personally led more than 70 mission trips to Israel and, during the coronavirus pandemic, hosted one-on-one conversations with local officials on Zoom.

Miller will stay on as CEO emeritus at the JCRC, the organization said on Thursday.