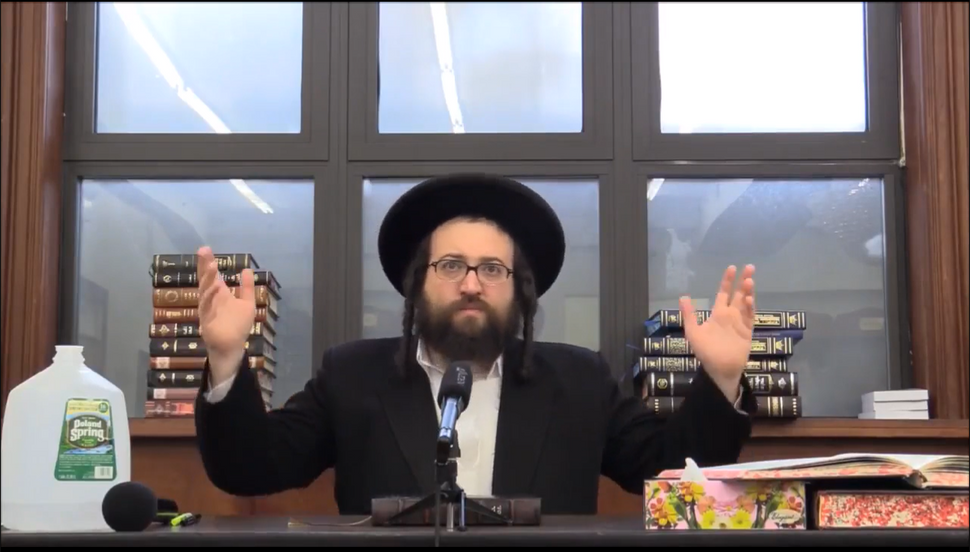 A screenshot from a religious lecture by Rabbi Yoel Roth, who Hasidic New Yorkers accuse of arranging religious marriages between children as young as 15. Image by Molly Boigon

During a Hasidic teenager’s first day at a new Brooklyn yeshiva last year, the head of the school approached him to talk about arranging his marriage.

“He told me, ‘Wow, you’re so cute. You’re going to find a girl fast,’” said the former student, who spoke on the condition of anonymity. “I was 16.”

That head of school, Rabbi Yoel Roth, and the school he runs, Yeshiva Tiferes Hatorah in Williamsburg, Brooklyn, are now the subject of investigations by the New York Police Department and the Administration for Children’s Services, the Forward has learned, after stories of Roth marrying off people as young as 15 erupted on social media in the last month. New York State requires people to be 18 to legally marry, or 17 with the consent of the Supreme Court or family court.

In interviews this week, siblings and witnesses of the rabbi’s acolytes and others familiar with his operations described Roth as the Pied Piper of Hasidic Brooklyn who is brainwashing children who look like they have not yet gone through puberty into religious engagement and wedding ceremonies.

“This is a real cult,” said one Hasidic woman in Brooklyn who said she has multiple siblings who joined Roth’s community, describing some as still “full-fledged” adherents. She spoke on the condition of anonymity to protect her siblings. “It was only once they got really hurt and they left, that those cult-like characteristics really — you could see it.”

In addition to the Williamsburg yeshiva, which is also known by the name Heichel Hakodesh Breslev, Roth runs Camp Breslev in Brooklyn and another nonprofit called Ach Tov V Chesed, according to tax filings. The organizations have a religious exemption from public disclosure of details like revenues and expenses.

Roth has also started a community of about 60 families in the Sullivan County, New York, town of Liberty, whose members are Roth’s most committed followers, including some of the young couples he matched and married.

Roth declined to be interviewed for this article through his secretary, Shaul Indig. Indig denied the charges in a phone call this week. He said the claims were “lies” from “people who hate” Roth, and that the rabbi organizes engagements among young people but does not marry them until they’re of legal age.

“They are going to be engaged for three years,” Indig said of a 15-year-old who was engaged to a 17-year-old last week. “If they were secular, they would just be friends for three years.”

But in videos posted to his website and on his social media channels, Roth says that listening to the state’s marriage laws is akin to listening to the Gentiles, and seems to advocate for marriage following only a few years after bar mitzvah.

“If you want to make a child happy, you have to marry him or her off,” Roth said in one video. Apparently invoking Rabbi Eliezer Shlomo Schick, who was arrested in 2011 in Israel for arranging child marriages, Roth said: “The yeshiva head spoke of pain, he spoke of 50 years that teenage boys write him letters, open themselves up to him. ‘There’s no other advice to be given except to marry off children young.’”

My favorite is when criminals implicate themselves on camera. https://t.co/MVsKX8bOIp

While people with knowledge of Roth’s community said he had been arranging the marriages for years, Twitter posts published earlier this month by the writer Frimet Goldberger garnered hundreds of reactions and brought the issue into the public eye.

Spokespeople for the city’s police department and children’s services agencies both declined to provide specific information about their investigations. But Oren Yaniv, a spokesman for the Brooklyn District Attorney, said in an email that the office is “aware of investigations” by those two departments and is “awaiting their results.”

While it is common in Williamsburg and other Hasidic communities to marry young, and via a matchmaker, most engagements are arranged with parental involvement and after the legal marriage age. Boys and girls who are not related are typically kept separated — in school, synagogues and social occasions — from about age 3 to 17.

Many have simultaneous religious and legal marriages at age 18. About two weeks before the wedding, the betrothed are taught about the mechanics of sex, and are expected to consummate their marriage during their first night together.

Former students, their families and others aware of Roth’s practices said that he arranges marriages without parents’ permission, often misleading a bride or groom’s parents into thinking that they are on the way to meet a possible match when they are really on the way to the engagement party. He also often omits information about the ages of the matches, they said, and does not let parents even chime in on the date of the ceremony.

Indig, Roth’s secretary, also denied these claims, and said: “If you do something good, there’s always people who criticize you.”

These religious weddings would not be considered legal marriages by the state if they are conducted for people below the legal marriage age of 18 (or 17 with special court consent), said Fraidy Reiss, the founder and executive director of the group Unchained At Last, which advocates for people who want to leave forced marriages. But since the age of consent for sex in New York is 17, Reiss said it’s not clear if consummating a religious wedding below that age could expose the children, Roth or the parents to charges related to rape or child abuse.

Because the marriages are illegal and the participants underage, children have to seek help from adults for recourse, such as divorce or other legal action.

“You cannot bring legal action in your own name; you can’t even easily retain an attorney,” Reiss said.

Before Roth became the infamous steward of child marriage, he was seen by many as a radical force for good in the Hasidic world, lessening some of the stringencies associated with the religious lifestyle.

About 13 years ago, Roth was fired from the Williamsburg yeshiva where he had taught middle schoolers from the Vien Hasidic community, and where he had already developed a cult of personality, said family members of his students and other residents of Hasidic Brooklyn. They said he was kicked out for talking to students in frank terms about sex and anatomy, for telling children they did not need to blindly listen to their parents and for making fun of Hasidic norms like reverence for rabbinic leaders.

Roth then started his own school associated with the Breslov Hasidic sect, bringing some children from the previous yeshiva. (Roth’s grandfather, Chezkel Roth, was a highly respected rabbinic authority hand-picked by the leaders of another Hasidic sect who died this month.)

Back then, Roth was seen as a crusader for a more compassionate approach to teaching Hasidic children, building his appeal by telling his students that things like wearing corduroy pants, getting a job and smoking would not ruin their relationships with God. Roth then and still accepts into his school children who are seen as “untouchable” — those who have gotten kicked out of other yeshivas or whose families have stained reputations.

In addition to his website, which contains music videos, lectures, letters of advice and a virtual bookshelf of religious texts, Roth regularly publishes videos on Instagram, which is highly unusual in the Haredi world.

“He is kind of the last refuge of the rejects in our community,” said Yosef Rapaport, a media consultant from Borough Park, Brooklyn, another heavily Hasidic neighborhood. Rapaport stressed that he himself condemns underage marriage and breaking the state’s laws, but added of Roth: “He gives refuge for a lot of broken souls.”

Naturally, Roth’s accepting approach ruffled feathers in the Haredi communities across New York, which includes several Hasidic sects and some non-Hasidic ultra-Orthodox Jews. But that only pulled his students closer to him, and expanded the support system his yeshiva created.

The Hasidic woman whose siblings were and are adherents of Roth’s approach called it a “double-edged sword.”

“When he did legitimately wrong things, he’d already groomed them in that way to say, ‘See? They’re coming after me because they don’t like what I’m doing. You’re thinking for yourself and you know,’” she said.

She said that in planning the marriages, Roth creates an “illusion of free choice,” telling his followers that they can forgo the typical large, lavish Hasidic wedding, but then demanding they use the photographers and makeup artists he approves.

“A person grabs his bris,” Roth says in one video, referring to the penis, “and makes it warm and he rubs it over and over again and you’re left without a brain.”

The student said what made him finally leave Roth’s school was when the rabbi went into “stupid and disgusting and inappropriate details” about boys washing their testicles in the mikveh during one class period. The boy said he started laughing and Roth kicked him out of class: “He almost pushed me physically; he was so mad at me.”

Others who have been in Roth’s orbit described “coercion” and eventual disillusionment that pushed students out of the yeshiva and away from the broader community he had created.

In videos on his website, Roth claims his critics are the same people who don’t have cell phones and are out of touch with reality. And he calls on viewers to have pity on children sitting at home unmarried.

Even some critics of the child matchmaking see some value in Roth’s broader message.

“It’s really important for there to be someone who says, ‘No, you don’t have to; you can think for yourself; you can do your own thing,’” the sister of one of his followers said in an interview. “If he would have stopped there, I think that would have been great.”

Correction, March 26, 11:06 a.m.: A previous version of this story misstated that there is no legal recourse for children in religious marriages. In fact, children can seek help from judges or from adults.