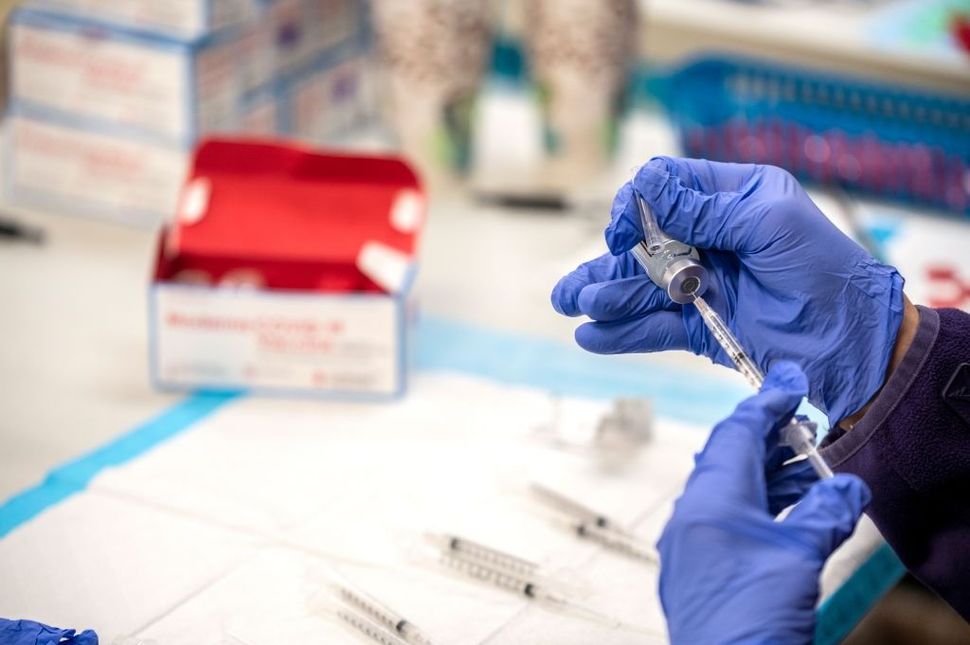 A nurse fills up a syringe with the Moderna Covid-19 vaccine at a vaccination site at a senior center on March 29, 2021 in San Antonio, Texas. Photo by Sergio Flores/Getty Images

In Israel, a country that has implemented a system of “vaccine passports,” documentation allows vaccinated individuals entrance to public spaces like theaters, gyms and other venues. The Biden administration is reported to currently be developing a standard way of handling such credentials in the U.S., according to The Washington Post.

Rep. Cawthorn, who has previously drawn criticism from Jewish organizations, including for posting photos on Instagram from a trip to Hitler’s vacation home, told Fox News that “proposals like these smack of 1940s Nazi Germany.” And the Libertarian Party of Kentucky compared the passports to Nazi Germany’s practice of mandating Jews to wear yellow Stars of David: “Are the vaccine passports going to be yellow, shaped like a star, and sewn on our clothes?” they asked on Twitter.

To Deborah Lipstadt, an eminent Holocaust historian and professor at Emory University, such comparisons are “disgusting” and “turning reality on its head.”

“You have to be very careful when making comparisons to the Holocaust,” Lipstadt said in an interview. “The Nazis made Jews wear the yellow star… as a means to humiliate, to terrify, to separate, to persecute them. This is to allow people to return to a normal life.”

Lipstadt also noted the apparent irony in likening vaccine passports to the Holocaust, in light of Israel’s use of the system. “If any country knows the dangers of marking people and what happens, it’s Israel and its population,” she said. “So to make these kinds of comments and comparisons is not only historically ludicrous but it’s almost insulting.”

Jewish leaders, including the Anti-Defamation League’s Jonathan Greenblatt and progressive Jewish groups like Bend the Arc and If Not Now, have spoken out on social media against the comparisons, with some leveling accusations of “antisemitic rhetoric.”

“While individuals should certainly learn lessons from the Holocaust and seek to ensure that the actions of Nazi Germany are never repeated, we must also take care to avoid directly comparing them to modern-day events, except perhaps in the most extraordinary of circumstances,” an ADL spokesperson told The Forward. “Failure to do so not only cheapens the memory of millions killed by the Nazis, it also diminishes society’s ability to effectively address the actual substance of the problem.”

“The Nazis made Jews wear the yellow star… as a means to humiliate, to terrify, to separate, to persecute them. This is to allow people to return to a normal life.” – Deborah Lipstadt, Holocaust historian

Kentucky’s governor, Andy Beshear, promptly condemned his state’s Libertarian party. “This group should stop politicizing the pandemic and apologize,” Beshear wrote on Twitter. “There is no place for antisemitism in Kentucky.”

Grenell, the former Acting Director of National Intelligence in the Trump administration, is facing criticism for a tweet that, in a reference to the Holocaust, read, “You’re hiding unvaccinated people under your floorboards aren’t you?” and urged his followers to “Speak up now” on the matter.

Critics of the post, including Greenblatt, have pointed to a different tweet by Grenell from 2019, when he wrote, “Never compare the Holocaust to anything. Ever.” At the time, Grenell was speaking in reference to Rep. Alexandria Ocasio-Cortez, who characterized the migrant detention centers at the U.S.-Mexico border as “concentration camps” — an analogy many on the Jewish left, including Bend the Arc, supported, while other Jewish groups condemned.

The comparisons of vaccine passports to the actions of Nazi Germany come as a group of Republican lawmakers, including Rep. Jim Jordan (R-Ohio) and Rep. Lauren Boebert (R-Colo.), have come out against the proposal, arguing that they might be unconstitutional and infringe on citizens’ liberties.

“No vaccine passports,” Justin Amash, the former Independent congressman from Michigan, wrote. “It doesn’t get much more dystopian than being required to ‘show your health papers’ wherever you go.”