In Turkey, counterfeit Jewish artifacts are commonplace – and often sloppy 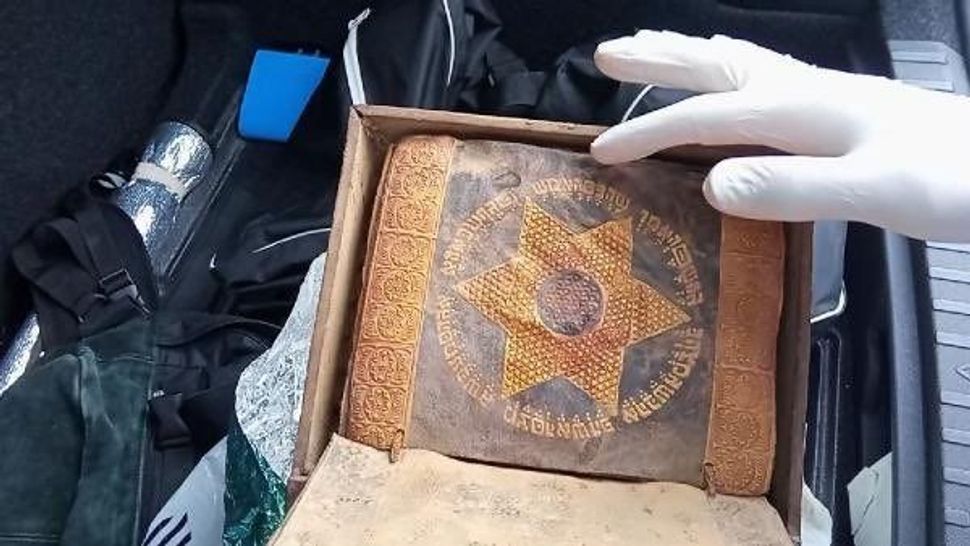 Turkish authorities received a tip recently that a trove of smuggled contraband was passing through the Black Sea city of Samsun in two vehicles.

For Turkish police, that’s nothing out of the ordinary. At the crossroads of Europe and Asia, the country is a transit point for many things, including drugs, refugees, arms and, in this case, smuggled antiquities.

But when they popped open the trunk on one of the suspicious cars in this case a couple weeks ago, they found something more exciting than the usual trove of Byzantine coins or Seljuk arrowheads. Wrapped in only a plastic bag was a leather tome emblazoned with Hebrew lettering written in golden ink.

Turkish police would soon announce they had found what they believed to be a Torah that was between 2,000 and 2,500 years old. A Jewish manuscript that was as old as the Dead Sea Scrolls? The news quickly spread to local and international media.

When Rabbi Mendy Chitrik, Ashkenazi Chief Rabbi of Turkey and director of the Alliance of Rabbis in Islamic States, heard the news — he rolled his eyes.

Though Turkish police have not yet released expert analysis of the artifact, it’s almost certainly a fake — and obviously so.

For one, the object in question is bound as a book, not a scroll. It also contains the Star of David, which only became a recognizable Jewish symbol in the middle ages, as well as niqqudot — Hebrew diacritical marks created in the late first millennium AD and rarely used in religious texts. Gold lettering would also not be valid ink for a religious manuscript under Jewish law.

Not to mention that some of the text itself looks to be complete gibberish.

It’s far from the first such artifact Chitrik has seen. As a rabbi living in Istanbul for more than two decades, he’s frequently contacted by tourists, collectors or concerned community members about a “Jewish artifact” they saw in one of Istanbul’s many bazaars and antique shops. 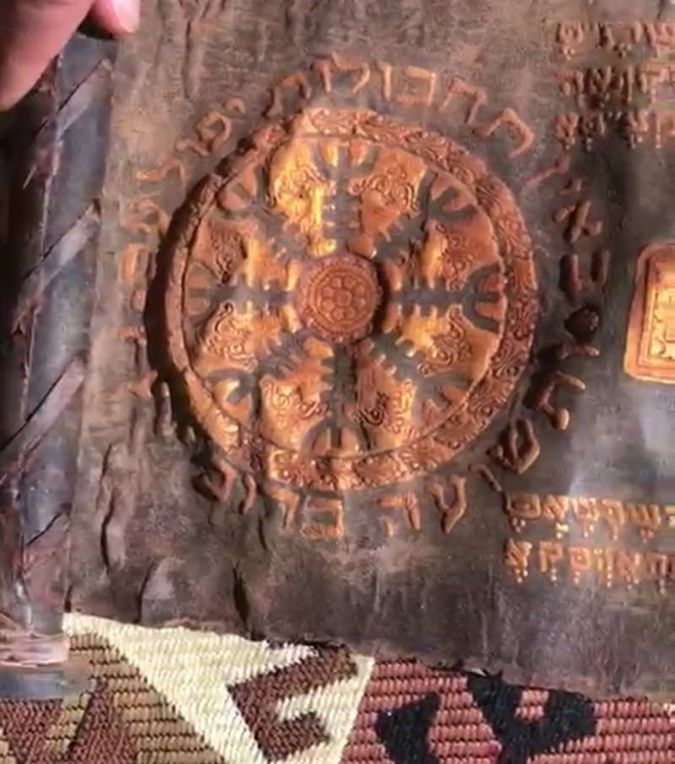 Another counterfeit manuscript found in Turkey, it features the slogan of the Mossad around a black sun, a motif generally associated with Norse paganism and more recently white supremacist groups. Courtesy of Rabbi Mendy Chitrik

“Every day I get these messages,” Chitrik said. “I stopped downloading them on my phone because it takes up too much space. They say ‘Rabbi, why don’t we save this ancient megillah from Iran or this ancient prayer book from Syria or the Torah scroll from Iraq.’ It’s all fake. Fake, fake, fake from beginning to end.”

Like the so-called Torah found in Samsun, they’re easy to spot.

In addition to using contemporary fonts and writing methods, they often use the symbols of modern Israeli or Jewish organizations. One tome Chitrik was contacted about actually had the logo of the Mossad on it.

A land steeped in history — both real and otherwise

However, that wasn’t always the case. In the past, it was common to come across authentic Jewish artifacts in Istanbul’s markets.

“Many years ago when I had more free time, I used to go around the Grand Bazaar and look for Jewish antiques,” Rabbi Chitrik told the Forward. “Sometimes I would find a Torah, half a Torah, a quarter of a Torah. [The shopkeepers] thought the calligraphy was very beautiful.”

Though he refused to pay the exorbitant amounts the dealers were asking for, he would occasionally negotiate them down and purchase the items to be buried in accordance with Jewish tradition – or if still usable, repatriated to active synagogues. 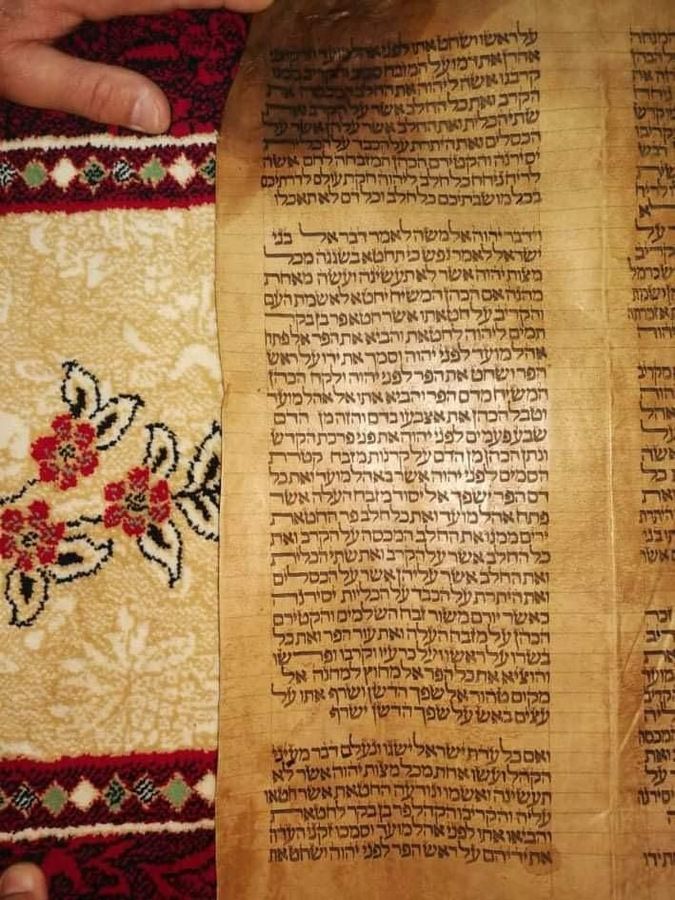 “These were legitimate, by which I mean they were authentic Torah scrolls. They were just likely obtained illigitamely,” Chitrik said. “By looking at the script we could see that this one was probably stolen from a synagogue in Ukraine or that one from Azerbaijan or from Iraq or Syria or sometimes even Turkey. And years later they would surface in some antique shops to be sold to Jewish tourists, people interested in calligraphy or whoever.”

It shouldn’t come as a surprise, considering that Istanbul was once the heart of an empire which, at its height, spread from Yemen to Hungary and Iraq to Algeria. Jews from across the Ottoman Empire flocked to its capital, and they brought with them their religious texts and artifacts. In later years, the city was a major transit point for members of the Zionist movement making their way from Eastern Europe to Palestine, and in the 1930s it welcomed many German Jews fleeing the Nazis.

In modern times, Turkey has become a nexus for the Illegal antiquities trade due to its proximity to conflicts in many of those former Ottoman provinces such as Syria, Iraq, Libya and elsewhere in the region. 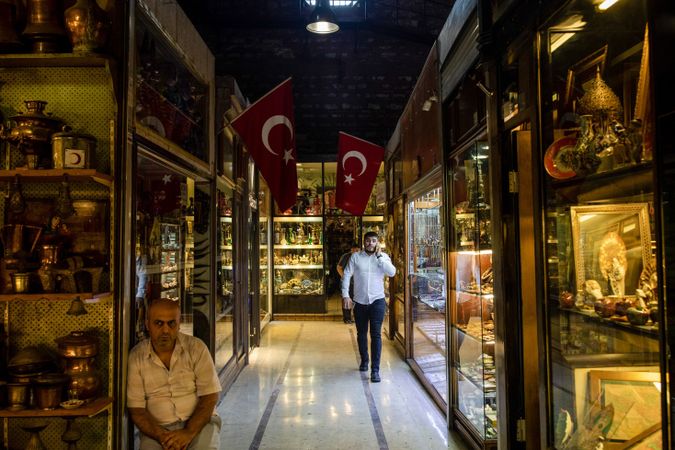 “Istanbul is a major transit point for trafficked material, particularly because Turkey shares a border with Syria,” explained Katie Paul, co-founder of the Athar Project, which monitors the online illegal antiquities trade. “Turkey is one of the gateways to Europe, so a lot of material will then get smuggled by land through Bulgaria and, over time, gets laundered into more legitimate markets in the west.”

According to Paul, Jewish manuscripts are particularly popular products for traffickers due to lax Israeli laws regarding the antiquities trade. “Israel is one of the few countries in the entire MENA and Mediterranean region that actually allows for the legal sale of antiquities,” she said. “That feeds this illicit market in Jewish material in particular.”

Sam Hardy, a criminologist based in Rome who researches the Illegal antiquities trade in Turkey and Eastern Europe, explained that the physical makeup of the manuscripts – which are generally printed on leather – suggest a rural Turkish origin, where animal hides are in high supply and leatherworking a common trade.

The fakes themselves make it pretty clear they are neither made by nor marketed to audiences knowledgeable about Judaism.

With so many smugglers based in Turkey, the fakes also often pop up to help boost trades of real items as part of a package deal.

“In our work on Facebook, we see a lot of counterfeit manuscripts,” Paul said. “We do see real manuscripts offered sometimes, and in many cases you’ll see one real one in a sea of fake ones offered in a lot. Traffickers will frequently try to stretch the amount of funding that they can get from a particular sale by adding a lot of fakes.”

“If you have a gullible buyer,” she added, “it is quite easy.”

In Turkey, counterfeit Jewish artifacts are commonplace – and often sloppy