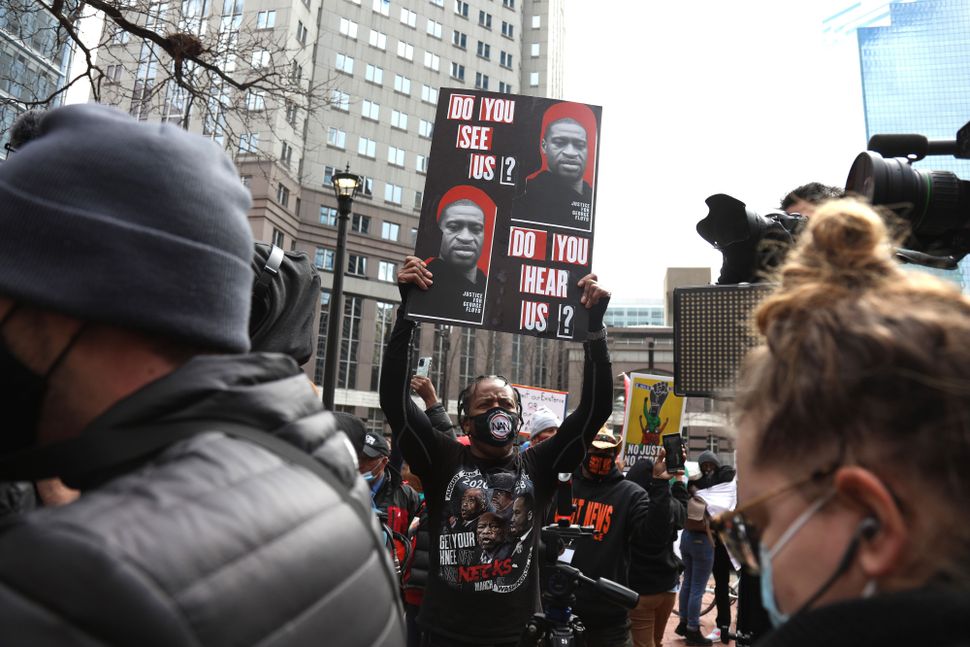 A person holds a sign outside the Hennepin County Government Center in Minneapolis, Minnesota, U.S., on Tuesday, April 20, 2021. Photo by Emilie Richardson/Bloomberg via Getty Images

Jewish groups and leaders took to social media following the Derek Chauvin verdict with expressions of relief, joy — and calls for systemic change in the wake of the trial.

“Thank God justice has been served in this case,” Rabbi Jill Jacobs, executive director of T’ruah, a rabbinic organization for human rights, tweeted. “And there’s so much work to do to fix the racist systems that led to this murder and so many others.”

None of us will be free until we replace these systems of injustice with systems of righteousness. #JusticeForGeorgeFloyd #BlackLivesMatter

Former Minneapolis police officer Chauvin was convicted on all counts for the murder of George Floyd on Tuesday afternoon, marking the first time in Minnesota’s state history that a white police officer was held criminally accountable for the killing of a Black man, according to the American Civil Liberties Union.

The Anti-Defamation League said in a statement that the verdict is a “critically necessary first step,” but that “no guilty verdict can change the fact that George Floyd — and Breonna Taylor, Daunte Wright, Adam Toledo, and too many others — should be alive today.”

“It is a long time past for our country to tackle systemic racism, reimagine what public safety looks like, and create transformational change to ensure justice and fair treatment for all people,” the ADL statement said.

“Let the breath we held waiting for this verdict,” Lesser tweeted, “be used to urge for the reform of our criminal justice system and policing.”

The Jewish Community Relations Council of Minnesota, the Minneapolis Jewish Federation and the St. Paul Jewish Federation put out a joint statement offering solidarity to the “broader African American community, including Black Jews and Jews of color.” The statement went on to thank the Minnesota National Guard for their “service in protecting local communities.” The Jewish Council for Public Affairs expressed their support for the JCRC’s statement, and added that “police violence, lack of accountability, and systemic racism existed long before police killed George Floyd and continue to persist today.”

“JCPA will continue to work with its partners across Black communities to transform law enforcement practices and structures and invest in community well-being,” their statement read.

Rabbi Rick Jacobs, president of the Union for Reform Judaism, quoted Lev 19:16: “Do not stand idly by while your neighbor bleeds.”

“Over a billion people saw George Floyd murdered,” Rick Jacobs wrote. “Even more heard today’s just verdict. For too long too many have stood idly by. No more.”

Jews for Racial and Economic Justice, a group that dubs itself home to New York’s Jewish left, said, “This verdict is not an indictment of policing.”

“The prosecution bent over backwards to separate Derek Chauvin’s murderous actions from the practice and institution of policing,” the group said. “But we know they can’t be separated. American policing is inherently violent, inherently anti-Black.”

The Democratic Majority for Israel (DMFI) said in a press release following the verdict that while “justice can never be fully done” for Floyd’s family, “we hope today’s conviction brings them some comfort and allows them to begin healing.”

“The verdict represents an important step toward addressing the grave injustices he and so many other people have suffered,” the DMFI statement read. “DMFI will continue to advocate for policies that will dismantle the systematic racism that still plagues our country.”

Bend the Arc: Jewish Action, a progressive Jewish nonprofit, said in a statement that they stand in solidarity with “Black and brown people resisting in the Twin Cities, in Brooklyn Center, in our Jewish communities, and across the country.”

“Regardless of today’s verdict, there can be no justice for George Floyd or the countless other Black and brown people murdered by police,” said Stosh Cotler, chief executive officer of Bend the Arc.

George Floyd should still be alive.

Regardless of today’s guilty verdict, this is not justice for him or the countless other Black and brown people murdered by police.

We must defund the police and dismantle white supremacy.

IfNotNow, another progressive Jewish group, said in a tweet, “Justice is a world where #GeorgeFloyd, #BreonnaTaylor, #AdamToledo, and countless others by the police are still alive.”

“Justice is a world where our tax dollars go to help communities thrive, not toward state violence and incarceration,” IfNotNow said. “Let’s fight for that world.”

Ben Shapiro, the popular Jewish right-wing pundit, was trending on Twitter in the hour after the verdict. As a reply to a quote of CNN’s Don Lemon saying “Justice has been served,” Shapiro said, “And we all know he would never have said this had the reverse verdict been reached.”

Scott Stringer, the New York City mayoral candidate, said in a statement stressed that while the verdict is “commendable,” the fight for justice has just begun.

“As mayor, I will not be held hostage by the police — and I won’t back down from upending the status quo when I encounter resistance,” Stringer said. “George Floyd and the loved ones he left behind deserve nothing less.”

Tali Farhadian Weinstein, a candidate for Manhattan’s District Attorney, called the verdict a “big step in the fight to make sure nobody in this country is above the law, especially those who are sworn to uphold it.”

Rep. Jerry Nadler of New York, in a statement following the verdict, said that “today, justice was served in Minneapolis.”

“The decision—the right and just decision—cannot allow us to grow complacent in the crucial endeavour to overhaul American policing,” Nadler said. “Instead, this must mark the beginning of a renewed effort to secure long-needed policing reforms, beginning with the bill named for Mr. Floyd.”

Nadler was referring to the George Floyd Justice in Policing Act, which passed along partisan lines in the Democratic-controlled House in June 2020.

Sen. Chuck Schumer, the Senate Majority Leader, said in a statement that “we should not mistake a guilty verdict in this case as evidence that the persistent problem of police misconduct has been solved.”

“The Senate will continue to work as we strive to ensure George Floyd’s tragic death will not be in vain,” Schumer said.