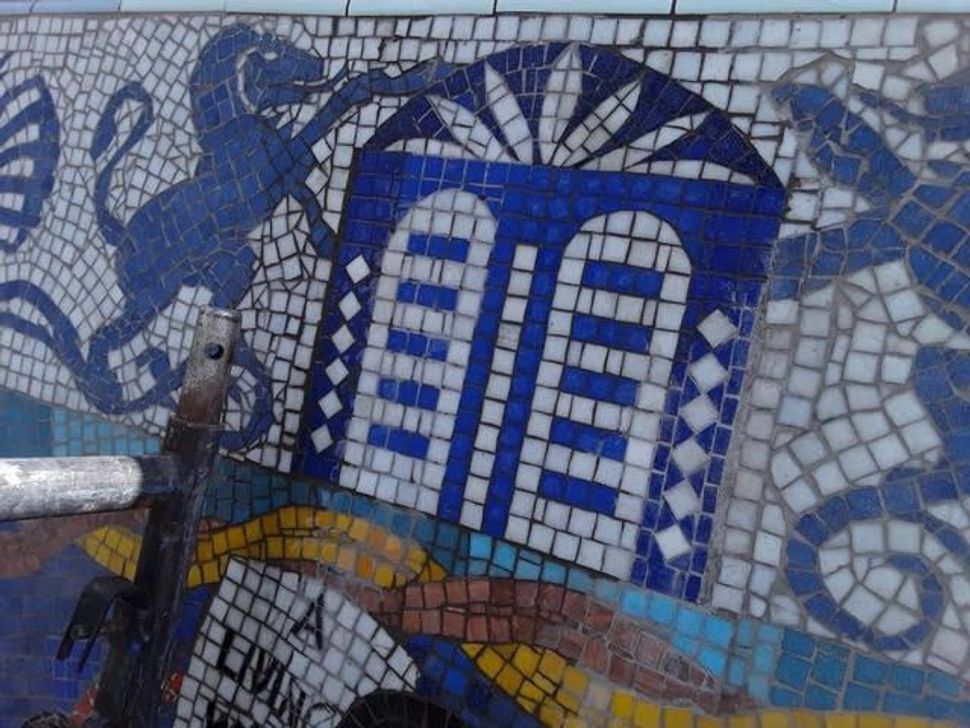 Details of “Fabric of Our Lives” 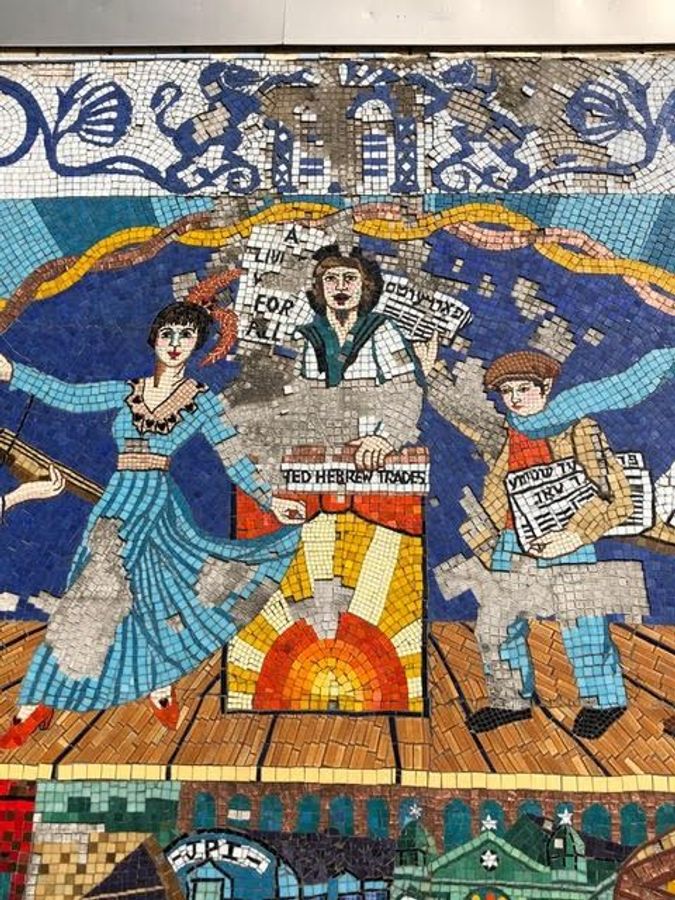 “Fabric of Our Lives” before restoration

If you had to stand outside through 40 years of Chicago winters, you wouldn’t look so good either.

The mosaic, installed on a wall of the Bernard Horwich Jewish Community Center on the far north side of Chicago, a predominantly Jewish neighborhood, tells the story of Jewish immigration to the United States, and Chicago in particular, during the late nineteenth and early twentieth centuries.

Entitled “Fabric of Our Lives,” its pictures and phrases illustrate the struggles these immigrants faced when they arrived in Chicago with little money, no jobs and frequently no grasp of the English language.

In the bottom, working half of the mural, three women are depicted sitting at sewing machines, working in a sweatshop, their material flowing onto Maxwell Avenue. The scene also includes some well-known Jewish institutions along with a West Side synagogue and a kosher butcher shop.

The top half shows the important role that culture played in the immigrants’ lives and features a musician, a Yiddish theater actor, a violinist, a boy selling Yiddish newspapers, a dancer, a writer and a labor unionist.

But the city’s harsh climate took its toll on the mural. While the 15 x 13-foot piece held up well for most of that time, in the past few years, it began to deteriorate.

“When I saw that it was falling apart at the top, I felt terrible,” Socoloff said. “I called the director of the ‘J’ and told him that I see that it’s really damaged. I said he can either pay to have it taken down or pay to have it repaired.”

“Fabric of Our Lives” before restoration

The organization chose to restore the mural, and good fortune followed. A maintenance person had saved the tiles as they fell off over the years. Also, Socoloff and Weiss still had a few boxes from the original project and the rest they were able to purchase on Ebay.

A tile installer, Brian McGlade, came on board, whose help was instrumental. And finally, none of the faces in the mosaic had been affected, which made the work that much more do-able.

They also hit an unusually beautiful stretch of late October weather and finished literally the day before the temperatures dropped and precipitation set it.

“It felt almost as miraculous 40 years later as it was the first time,” Weiss said. 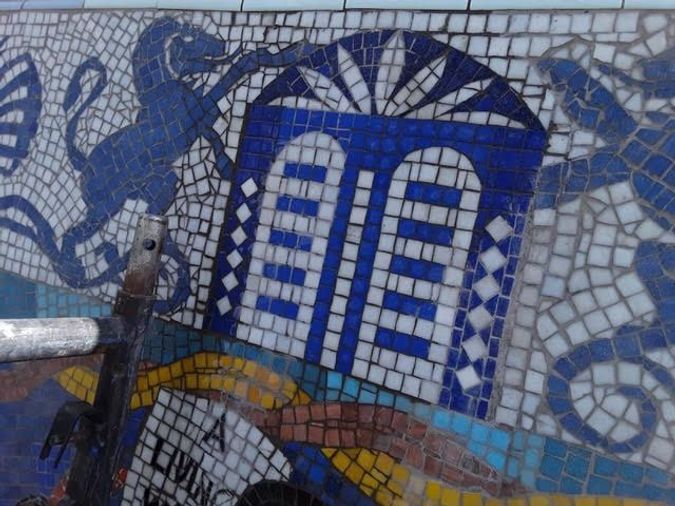 Details of “Fabric of Our Lives”

When Socoloff and Weiss first collaborated on this project, it was actually the first large scale public piece of mosaic art for either of them. Looking back, they both readily admit that it was a bit ambitious, but both are accomplished artists and were confident they were up to the task.

“I’m just amazed that it came together and that it has held up as long as it has and that it’s so beautiful and meaningful to so many people,” Weiss said.

“It celebrates the immigrant experience,” said Rachelle Gold, co-president of the Chicago Jewish Historical Society. “This is what the immigrants brought with them. And how they continued to produce and enjoy their lives in the new country.”

But Gold also notes that this is a uniquely Chicago piece of work. “There are iconic Chicago places and institutions in this mural.” 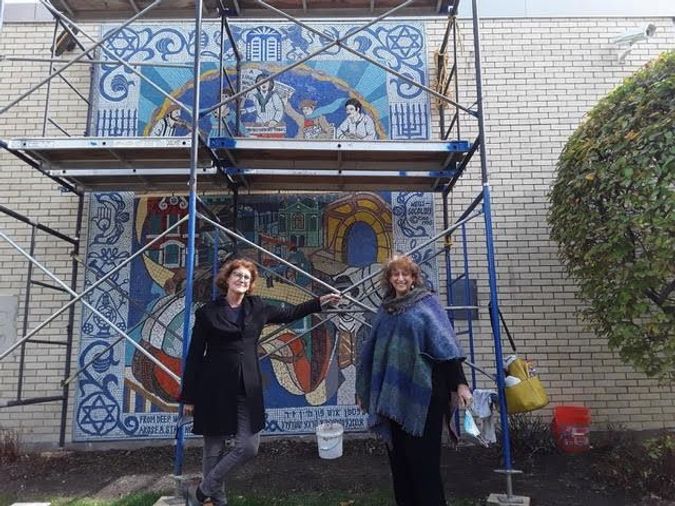 Weiss and Socoloff in front of “Fabric of Our Lives”

Both Weiss and Socoloff have spent their entire careers as artists and activists. Socoloff, a Chicago native, attended Northern Illinois University and received a degree in arts education, then spent her entire career as both an artist and an arts educator, working for over 37 years teaching art for the Chicago Public School System.

It was out of her involvement with the organization Chutzpah, a left-leaning Jewish group that focused on community building around issues of social justice, that she first learned about heroic Jewish labor history.

Weiss moved to Chicago from Philadelphia and has been an activist and involved with the Chicago Public Art Group for her entire professional life. She too worked as in arts education and continues to work as an artist. 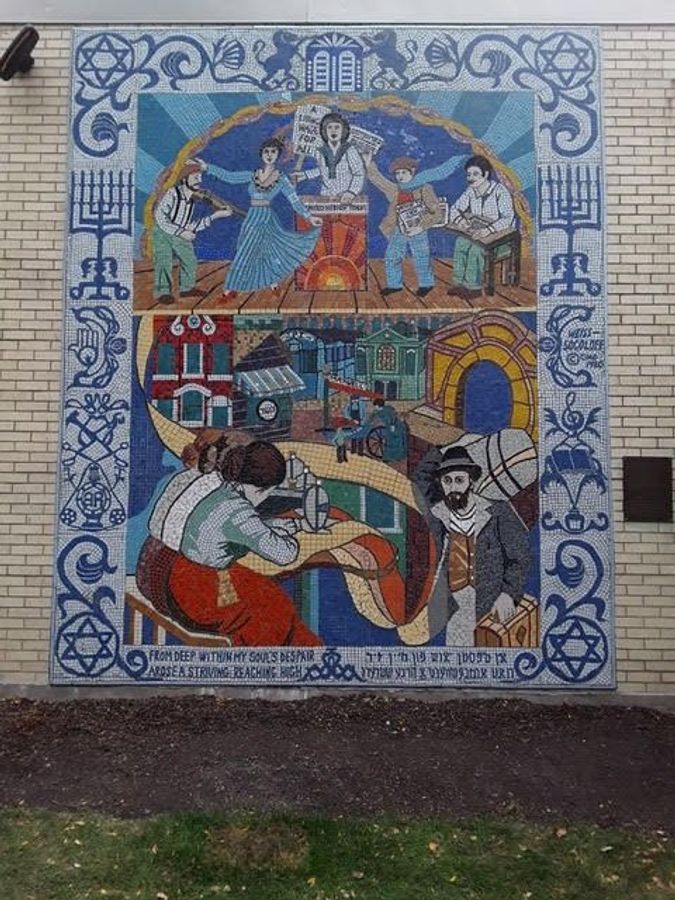 “Fabric of Our Lives” after restoration

Weiss poignantly described being both delighted and saddened by how relevant so many of the themes still are.

“There’s a union organizer with her sign calling for a living wage for all—people are still fighting for that today,” she said. “The big ideas were Yiddish culture and literature and art and dance and activism—it all grew from those experiences, arriving in Chicago, which frequently meant working for clothing manufacturers, one of the themes which is depicted in the mural.”

In fact, the lower border contains this quote in Yiddish and English from the Morris Rosenfeld poem “Why I Am I As Sweatshop Bard.” The quote reads: “From deep within my soul’s despair Arose a striving reaching high.”

Both artists said that while they were working on the restoration, passers-by told them how much the mural means to them and how glad they were that it was being repaired.

“After so much loss and tragedy with the pandemic and racial injustice, to physically repair something was so deeply satisfying. To be out there felt very symbolic,” said Weiss. “I felt really strongly that this was tikkun olam, repairing the world.”