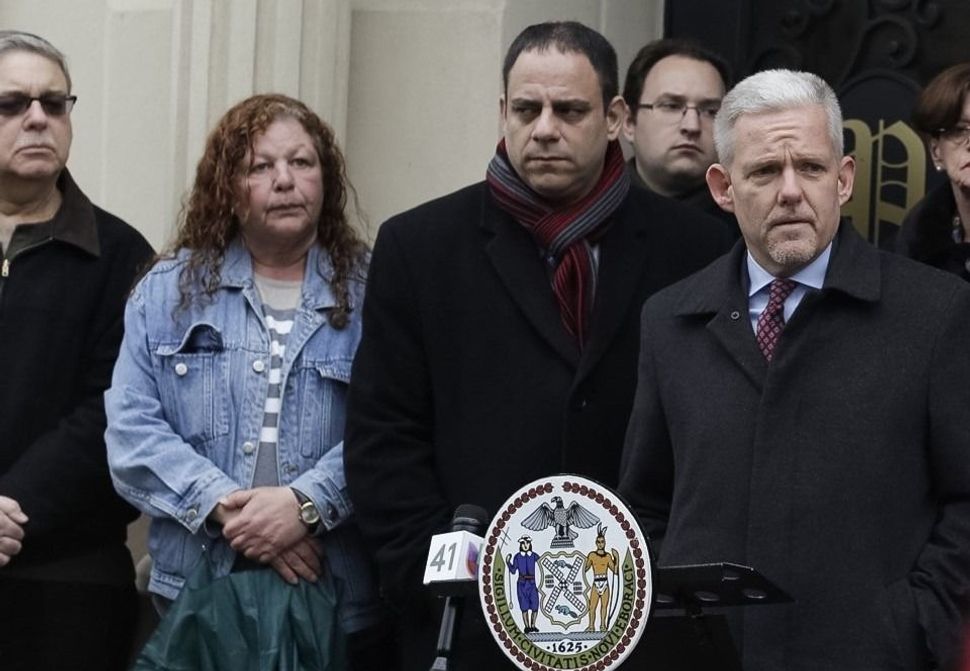 Growing up in a working-class part of Astoria, Queens, Jimmy Van Bramer and his friend Albert Behmoiras were at the mercy of a group of bullies who chased them from the school playground and called him “gayboy” and Albert “Jewboy.”

“I didn’t know why people would dislike Albert because he was Jewish,” said Van Bramer, a practicing Roman Catholic and one of four openly LGBT members of the New York City Council. He is now a candidate for Queens borough president.

“All I knew was that both of us were equally hated, but for very different reasons, and we became best friends,” he said. “We really were bound together.”

Van Bramer says his affinity for the Jewish community was forged then, in his friendship with Behmoiras, who remains a close friend. Coming face to face with hatred against Jews, and targeted himself because he is gay, gave him no choice but to side with the persecuted and to support Israel, he said.

“I have felt persecuted because of who I am, because of who I believe I was made to be,” Van Bramer said in a recent interview with the Forward. “And so I feel very strongly that I have a particular role to play and an obligation to stand up against all forms of hatred, including antisemitic attacks and rhetoric against the Jewish people.”

Van Bramer recently came across the engraved yarmulke he wore at Behmoiras’s bar mitzvah at the Hillcrest Jewish Center in 1985. “I took a picture of it and I sent it to him, and he couldn’t believe that I still had it,” he said.

Van Bramer, 51, who is term limited, is running in a three-way race for Queens borough president in the June 22 Democratic primaries. He was first elected to the City Council in 2009 and now serves on a third term. His competitors are Donovan Richards, who was elected to the position in a special election last year; and Elizabeth Crowley, a former councilwoman. A recent poll showed Van Bramer in third place in the city’s new rank-choice election – which allows voters to rank candidates in order of preference – with 9% picking him as their first choice, though the survey included another two candidates who aren’t on the ballot. 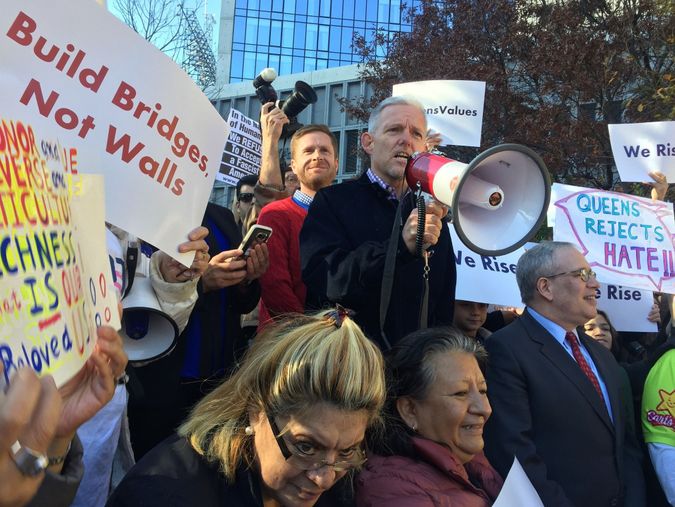 Of New York’s five boroughs, Queens has the third largest Jewish population with more than 97,000 Jewish households, according to data compiled by the Jewish Community Relations Council of New York in 2011. The 26th District he currently represents, which includes the neighborhoods of Astoria, Long Island City, Sunnyside, and Woodside, has a growing Jewish population.

The connection Van Bramer made in childhood between hatred toward Jews and gay people became even more evident to him in law school. One of the first books he read at the library at St. John’s University after he came out was The Pink Triangle, a book written about the persecution of gay Jews by the Nazi regime during the Holocaust.

It was Van Bramer’s communality with Jews that led him to take a personal tour of the Auschwitz-Birkenau concentration camp during a visit to Europe with his husband, Dan Hendrick, in 2016.

“Seeing it firsthand and literally being able to walk through Auschwitz just puts you in touch with the tremendous loss of life, and what happens if we do not stand up in the face of antisemitism and hatred,” said Van Bramer. “I think every person should, if they can, find their way to the sites and to the memorials – to see the end results of what happens if people don’t fight back, if they don’t take a stand against antisemitism.”

As councilman, Van Bramer visited Israel twice – in 2010 and in 2015 – on trips sponsored by the Jewish Community Relations Council (JCRC) of New York.

He is a founding member of the progressive caucus of the Council. He stood with other progressives in endorsing actress Cynthia Nixon in the 2018 gubernatorial election. And he backed Tiffany Cabán, a progressive former public defender, in the close race for Queens district attorney against Melinda Katz, a longtime Democratic politician, in 2019. 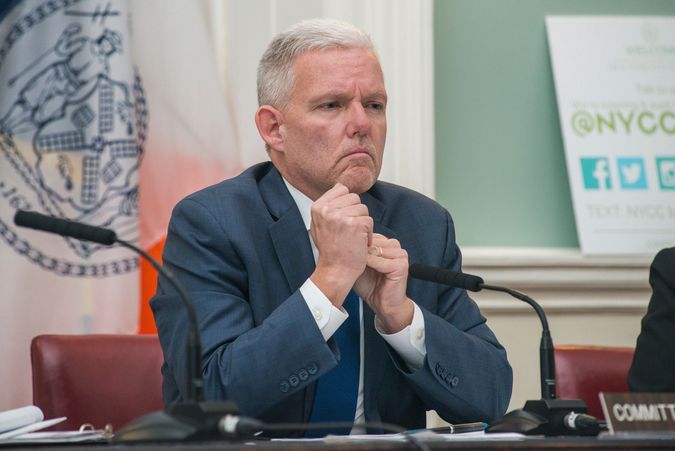 In an hour-long phone interview, Van Bramer stressed the compatibility of politics and his support for Israel. “I don’t believe that they’re mutually exclusive – to believe in the importance of the State of Israel while also being progressive,” he said.

“I am as progressive as they come,” he added. “And I think going to Israel on those missions is consistent with my progressive values.”

Last year, many New York politicians condemned the Democratic Socialists of America’s local chapter for asking Council candidates to pledge “not to travel to Israel if elected… in solidarity with Palestinians living under occupation.” The DSA later clarified that it was referring to the JCRC-sponsored annual trips.

Van Bramer said that as someone who’s politically and civically engaged, the well-being of Israel and the situation in the Middle East is “incredibly important” to him, and visiting Israel is key to learning about these issues. “I am someone who is fiercely independent, I am someone who is never afraid to challenge authority or the establishment,” he explained, “so I’m capable of making up my own mind.”

“If you just follow Israel through the TV or through the paper, you form a very one dimensional view of the nation and of the region,” he continued. “I think being there and seeing the entire country, listening to experts and so many different points of view, as well as visiting Ramallah, is really important to understanding the history and the conflict.”

Though he hasn’t received the DSA’s backing in his race, following an apparent falling out in 2019, he is supporting Cabán’s Council race and Moumita Ahmed, two DSA-backed candidates.

In 2016, Van Bramer co-sponsored a resolution that condemned “all efforts to delegitimize the State of Israel and the global movement to boycott, divest from, and sanction the people of Israel.”

“I support a two-state solution. I want the Palestinian people to be respected and I want justice for all,” he said. “But I cannot support BDS because I don’t believe it’s the most effective way to engage and to move us closer to a just and peaceful society.”

Van Bramer said that he has spoken privately to the candidates he supports about the issue, but can’t say he managed to convince them to change their views.

“Look, I respect the fact that some people choose to exercise their First Amendment rights to support a boycott, or BDS,” he said. “I do not have that position. I just don’t believe that you have to adopt that position to be a progressive. I do not.”

A champion of Jewish culture

Before joining the Council, Van Bramer was chief external affairs officer of the Queens Public Library, serving as a link between the communities and government. He is the current chair of the Cultural Affairs, Libraries and International Intergroup Relations Committee. In that role he helped secure increased funding for cultural organizations and institutions and public libraries. 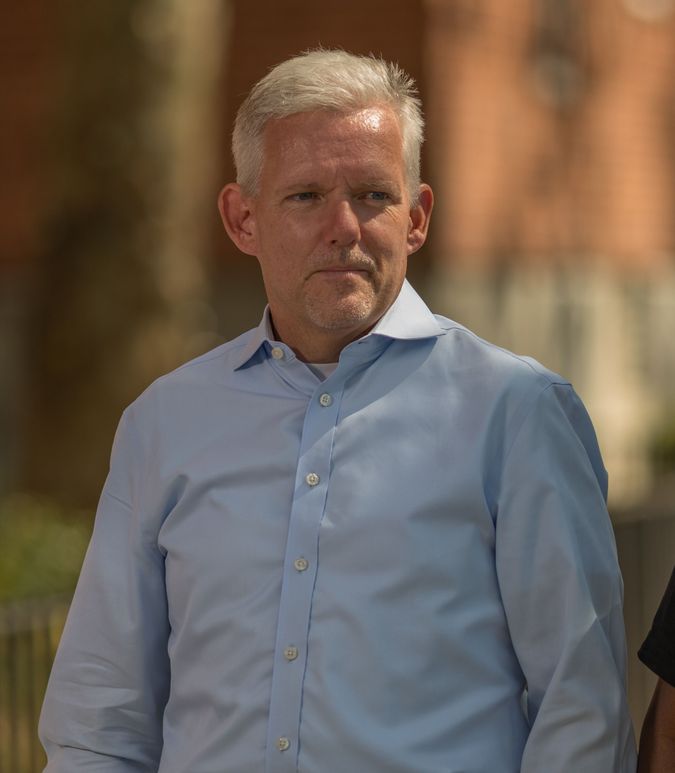 Van Bramer said that as borough president he would be able to use the office “to amplify the needs of the people” who live in Queens. Recalling his frequent visits to local synagogues growing up, Van Bramer said that if elected, he will seek to “be a representative for the Jewish communities of Queens and work very closely with every part of that community because it is what I’ve always done.”