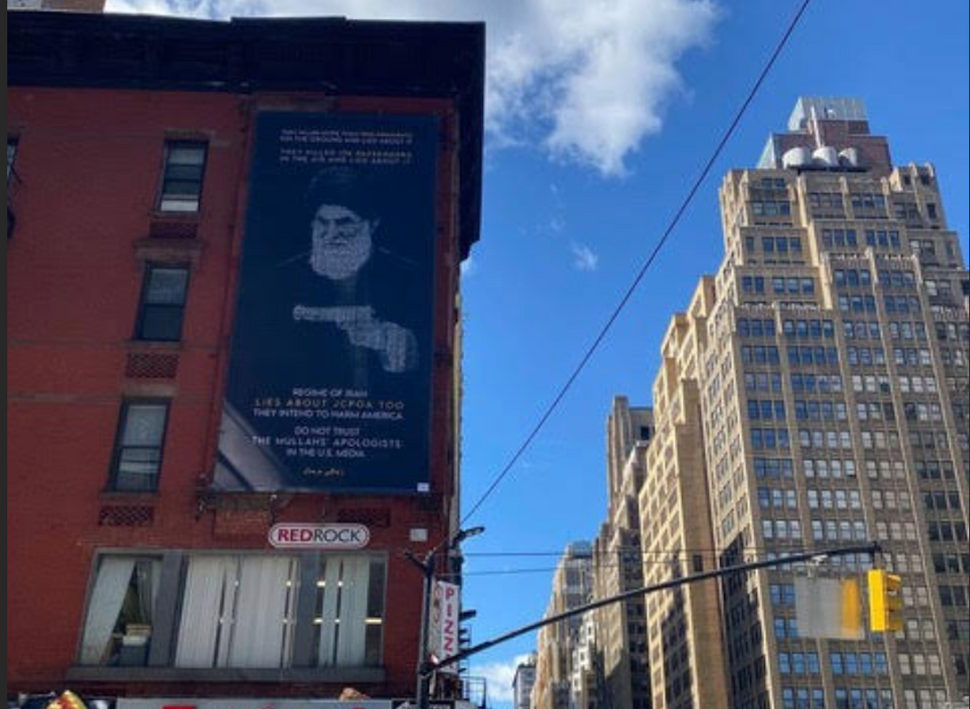 The grassroots Iranian opposition group that posted an anti-regime billboard in Times Square is now turning to the American Jewish community for help.

“The American Jewish community has had a proud history of supporting social justice and human rights causes,” said Ali Ebrahimzadeh, a Muslim-born opposition activist to the Iranian regime. “We are now asking you, our Jewish friends, to support the people of Iran who are facing a human rights calamity at the hands of the Islamic regime there.”

Ebrahimzadeh, 39, is the Los Angeles-based founder of the “Normal Life” campaign, which attracted media attention two weeks ago after it sponsored a billboard in Manhattan’s Times Square.

The “Normal Life” campaign billboard features a depiction of Iran’s Supreme Leader, Ali Khamenei holding a gun, along with these words: “They killed more than 1500 innocents on the ground and lied about it. They killed 176 passengers in the air and lied about it. Regime of Iran lies about JCPOA too. They intend to harm America. Do not trust the mullahs’ apologists in the U.S. media.” 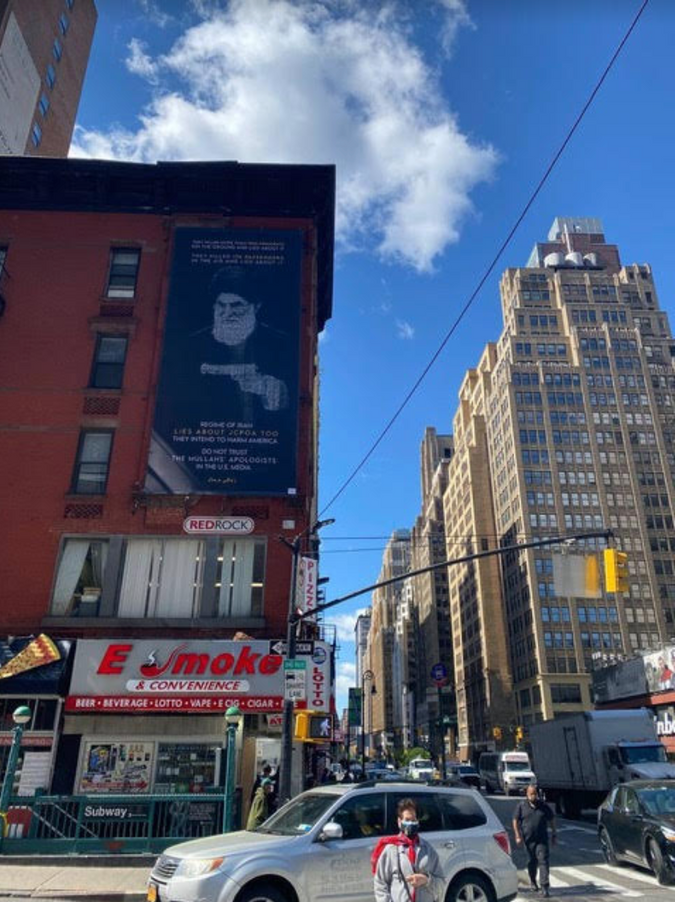 The billboard makes reference to a December 2019 Reuters news report that the Iranian regime’s security forces killed 1,500 protestors during a two-week period of protests in the country. The 176 passengers mentioned on the billboard highlights the lives lost when the Iranian Revolutionary Guard Corps downed a Ukrainian International Airlines flight in January 2020.

Ebrahimzadeh said he and 31 other non-Jewish Iranians launched their campaign seven months ago through messages and videos on social media platforms.

“For more than 40 years the regime in Iran has taken away basic freedoms and economic opportunities of Iranians and then lied to them through state-controlled propaganda that everyone elsewhere in the world has their same hardships,” said Ebrahimzadeh, who fled Iran in 2015 as an opposition activist fearing for his life. “We are trying to expose the regime’s lies to Iranians and also bring awareness to people outside of Iran of the unnormal life Iranians suffer under the mullahs’ rule today.”” 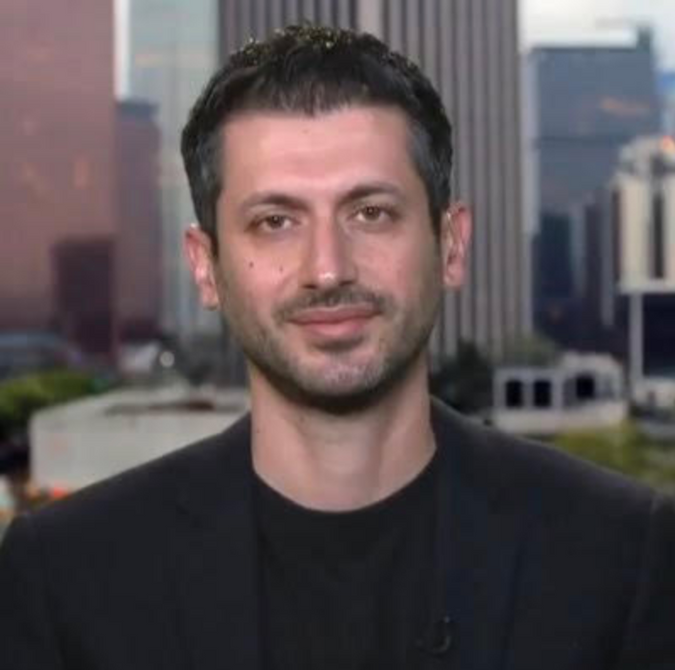 Ebrahimzadeh said he and his group are not affiliated with any Iranian organization, but are individual Iranian immigrants from the U.S., Australia., Australia, Europe and Canada who decided to band together to speak out against the injustices the Iranian regime were carrying out against their compatriots. He said they each donated their own private funds to pay for the month-long leasing of the space for their billboard.

Their group’s billboard and its location were inspired by a similar 2019 billboard campaign by the Boston-based Committee for Accuracy in Middle East Reporting in America (CAMERA) a non-profit group which monitors and exposes anti-Israel bias in the media, said Ebrahimzadeh.

“The CAMERA billboard two years ago in the same location across from the New York Times building called out the newspaper’s failure to accurately report on the terrorist actions of Hamas and it gave us the idea to send the same message to the Times about their repeated failure to report on the random arrests, torture, imprisonment and executions by the regime in Iran against innocent protestors,” said Ebrahimzadeh.

CAMERA’s leadership said they were gratified to hear that their group had also motivated the “Normal Life” campaign’s billboard.

“As someone of Iranian heritage myself, I am very pleased that Mr. Ebrahimzadeh was inspired by our billboard, which aimed at getting the New York Times to report truthfully about Hamas,” said Alex Safian, CAMERA associate director. “The Iranian regime is the main supporter of Hamas, so getting the Times and the rest of the media to also report truthfully about the regime is really the same fight.”

Close up of billboard Courtesy of KARMEL MELAMED

Ebrahimzadeh said he has been overwhelmed by the positive reactions from people in Iran to the billboard and also to their campaign during the last three months. The campaign’s activities have also been extensively covered by privately owned Persian languages satellite news programs based in the U.S. and Europe that broadcast daily into Iran.

He said he has received “thousands and thousands” of supportive messages through social media from Iranians.

At the same time, Ebrahimzadeh said he has also encountered threats and cyber-bullying on social media from supporters of the regime inside Iran who have accused him of being a “Zionist”.

“The regime has no other way of attacking me, so they call me a Zionist. I am not offended by the Islamic regime calling me a Zionist because I have nothing against Israel or the Jews,” said Ebrahimzadeh, who also works as an independent carpenter during the day. “We Iranians have had a great friendship with the Jewish people since the times of Cyrus the Great and we are now asking America’s Jews to raise their voices against the inhumane crimes this regime is unleashing on Iran’s people.”

“Ali Ebrahimzadeh’s campaign is bold, gutsy, and deserving of our attention,” said Richard Hirschhaut, Los Angeles director of the American Jewish Committee (AJC). “It demands that outrage over Iran’s bellicose behavior on the global stage not obscure an equal measure of indignation over the denial of basic human rights within the country.”

Other Jewish leaders said that U.S. foreign policy concerning Iran has been too politically charged in recent years and American Jews should set aside political differences to address the larger issue of the Iranian regime’s continued genocidal threats against Israel.

“The Ayatollah Khamenei has called for a ‘final solution’ against the world’s largest Jewish community, some seven million Jews in Israel,” said Rabbi Abraham Cooper, associate dean of the L.A.-based Simon Wiesenthal Center. “He and his regime promote Holocaust denial. They have targeted Jews for terror attacks dating back to the 1980s. We should make every effort to remove this issue from the Trump-Biden wars to common sense and self-preservation”.

While American Ashkenazi Jewish leaders have addressed the Normal Life campaign’s new billboard, many of the leaders of the Iranian Jewish groups in Los Angeles and New York did not return calls for comment. For more than four decades, many Iranian Jewish leaders have primarily refrained from commenting about political matters concerning Iran for fear of the regime’s reprisals against the 5,000 to 8,000 Jews still living in Iran.

Yet many individual Iranian American Jewish activists have long argued that their leadership’s old mentality of silence only allows the regime to carry out their malfeasance without fear of facing negative consequences. The individual activists therefore continue to speak out against the Iranian regime’s continued antisemitism, Holocaust denial and against the regime’s human rights abuses.

George Haroonian, one such long-time vocal Iranian American Jewish activist, said Jews who have always suffered from discrimination, attacks and injustice for centuries, should speak out against the constant persecution people face in Iran.

“I recommend that the Jewish community, no matter what their political affiliation is, to participate and support the plight of Iranian people, who are in fact by far great friends and admirers to the Jewish people,” said Haroonian who lives in Los Angeles.

While the older Iranian Jewish community members have been hesitant to publicly criticize the current Iranian regime, young Iranian American Jewish activists said they supported the Normal Life campaign and felt a special duty to speak out about the regime’s crimes against humanity because of the stories of oppression they heard from their parents.

“As a community that experienced, firsthand, the dishonesty, brutality, and inhumanity of the Iranian regime, we have a moral obligation to amplify the words and actions of the Iranian people fighting for their basic human rights and speaking truth to power in Iran,” said Arielle Mokhtarzadeh, co-president of 30 Years After”, an Iranian Jewish non-profit based in L.A. For his part, Ebrahimzadeh said he and his group will continue to reach out to various American groups and American Jews of all political and religious affiliations to support the people of Iran’s aspirations for true freedoms in a future democratic and secular Iran.

“This is not a Democrat or Republican issue— it’s about giving basic human rights to the people of Iran,” said Ebrahimzadeh. “What the people of Iran are saying is they are done with this regime. They want to enjoy a normal life like every other free nation without constraint fear and persecution from their current rulers.”