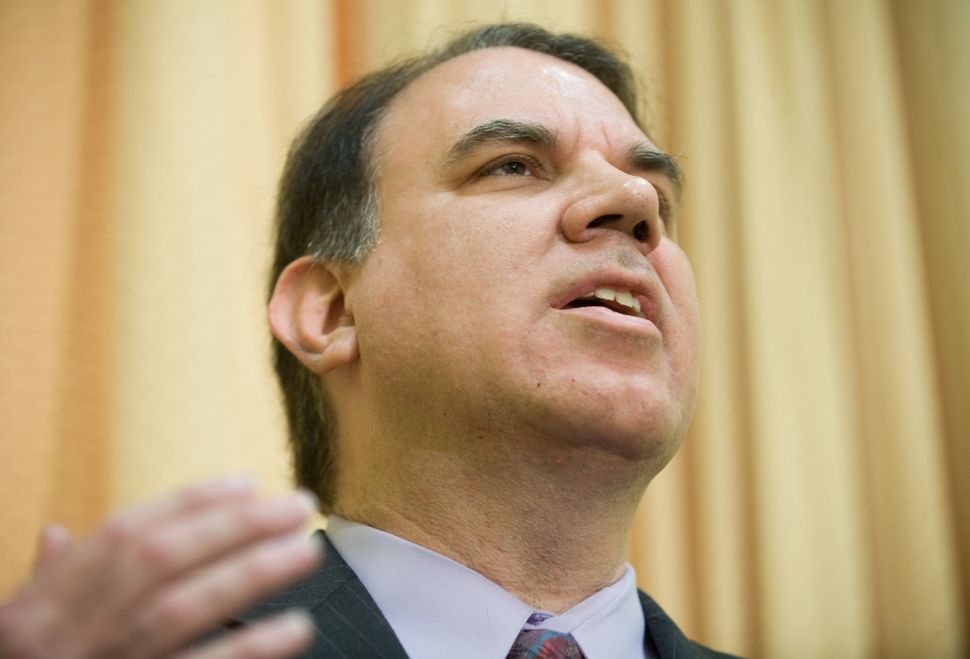 As he has so often in the past, Alan Grayson is itching for a fight. For the second time, he is about to run against Florida’s incumbent Republican U.S. Sen. Marco Rubio.

Grayson, 63, a pugnacious, progressive and former three-term representative from Orlando, is almost certain to join the Democratic challenge to Rubio in a race that is expected to cost more than $50 million. Central Florida Cong. Val Demings is planning to join the race, and another area Congress member, Rep. Stephanie Murphy, is also considering joining the race.

Grayson is already in his trademark full attack mode, and his target is Rubio, rather than any of his Democratic rivals.

Grayson wrote recently in a fundraising email that the GOP incumbent, “Sounds like a cuckoo clock would sound if it were manufactured by Fox News. He’s an ineffectual, clueless lightweight whom any stiff breeze would blow away.” 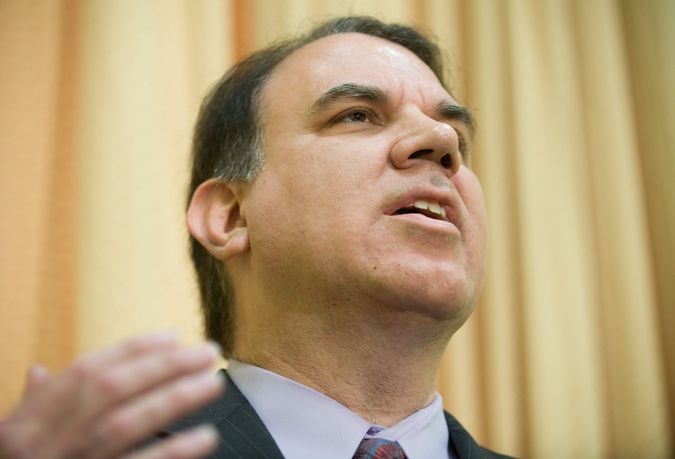 Grayson, who opposes the Senate filibuster, says that Rubio is part of the GOP’s “institutionalized obstruction,” as well as an “obedient puppet” of “selfish corporate interests.”

Rubio, a member of the Senate Intelligence Committee, recently made headlines on “60 Minutes” when he said that reports of UFO sightings should be taken more seriously. That Grayson said, “made it a lot harder to take him seriously.”

Grayson, the son of two teachers, was raised in the Bronx, educated in Boston –three Harvard degrees – and made his reputation as a civil trial litigator in Washington, D.C., until moving to Orlando in 1997. There, he sent his five children to public school and to Chabad, but is himself more of a secular Jew. Preparing to attend a campaign event several years ago on Yom Kippur, he told me, “I’m not Sandy Koufax.” Still, he put a mezuzah on the door to his Congressional office, and displayed a small shofar on one shelf. As a lawmaker, Grayson says he places himself squarely in the Jewish tradition of social justice and, in what has almost become a cliche for Jewish politicians, says his greater goal is healing the world, tikkun olam.

Sitting at a picnic table outside a pizza restaurant not far from his home, Grayson’s mellow mien belies his bellicose rhetoric. He says there is no question that, after seven political campaigns in 15 years, he still has the zest and energy required for this latest race.

However, the consensus among Florida Democrats, even left-of-center Democrats, is that a Grayson run would be a self-serving, kamikaze candidacy in what is generally expected to be a tough, mid-term election cycle for his party.

“While Alan is a very smart and successful former House member, the tide has changed against his brand of politics,” he said. A candidate like him “will not be able to attract the moderate or somewhat left of center voters, but will more likely alienate them.”

More neutral observers take a similar view, although with a caveat.

“He has some challenges compared to some of his early races,” said University of Central Florida political science professor Aubrey Jewett. “His political style might not go over as well today as it used to.”

Much depends on what other Democrats get into the race. But the odds of Grayson ultimately unseating Rubio, Jewett said, are “pretty slim, but stranger things have happened. He certainly will shake things up.” Any campaign involving Grayson is bound to be “a political brawl.”

In any case, money shouldn’t be a problem for Grayson. In the course of his political career he has raised more than $20 million, mostly in small contributions, from a national base of 125,000 donors. In addition, Grayson has amassed three small fortunes of his own before entering electoral politics – in his law practice, the stock market and telecommunications. He self funded his first winning campaign in 2008, and he has supplemented his subsequent runs with his own money.

As our interview began, he volunteered that the colorful shirt he was wearing was one of the few articles of clothing salvaged from a recent, early morning house fire that he and his children barely managed to escape. 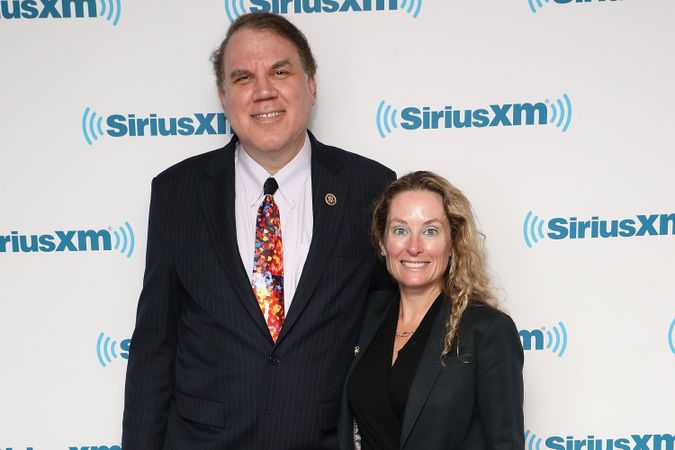 Alan Grayson and Dena Grayson visits the SiriusXM Studios on May 15, 2018 in New York City. Image by Taylor Hill/Getty Images

Before his first, unsuccessful run for Congress in 2006, Grayson made a name for himself by suing profiteering defense contractors on behalf of dozens of whistleblowers. That year, he campaigned for Congress as a strident opponent of the Iraq War. It was a courageous – if risky – position for someone running in a Sun Belt swing district and, to the surprise of few, he lost that primary.

Two years later, as a newly-elected, first term congressman, Grayson shot out of obscurity and into the media stratosphere from the floor of the House. On Sept. 29, 2009, to the delight of the frustrated Democratic base, he denounced Congressional Republicans for blocking President Obama’s Affordable Health Care Act, with a cruel and bogus alternative:

Grayson went on to characterize the estimated 50,000 of Americans who die annually for lack of medical care as victims of “a holocaust.” After pressure from Jewish organizations like the ADL, who said it cheapened the term, Grayson apologized, adding that he had relatives who died in the concentration camps.

Notwithstanding, that moment galvanized the Democrats’ progressive wing, and Grayson adroitly leveraged that sudden notoriety. He became the darling of MSNBC and an instant hero and spokesperson for the party’s left.

Health care, especially for seniors, remains at the top of Grayson’s priorities for the coming campaign.

“These fights have meaning,” he said, while nibbling on a slice of Sicilian pizza. “I’m never going to be happy about people dying because they can’t get medical care. People understand what I was trying to do…I stand for something. Can Marco Rubio say that?”

A call to Rubio’s Senate office was not returned, but in 2016 Rubio said, “Alan Grayson is insane.” In the years that followed his 2009 speech, Grayson made a name for himself with his slashing rhetoric, like referring to then Vice President Dick Cheney as a “vampire,” comparing the Tea Party to the Ku Klux Klan, and dismissing lobbyists as “blood sucking leeches.” In one infamous misstep, for which he apologized, he referred to a female lobbyist as “a K Street whore.”

In seven political races since he won in 2008, Grayson’s record at the polls is sharply erratic: He was turned out of office in the Tea Party wave of 2010. Then, in 2012, in one of the biggest swings in House electoral history, he was elected in a redrawn, Orlando-area district that was more Democratic, and then re-elected in 2014. He gave up that safe seat to run for the Senate in 2016, and was crushed in 2018 when he tried to reclaim his old House seat from its Puerto Rican incumbent.

So, with two electoral strikes against him – the 2016 race against Rubio and, two years later, a failed effort to reclaim his Congressional seat – why does Grayson want to go through another grueling campaign?

Running, he says, is “personally a joy. Maybe I am a happy warrior.”

It is possible to be a fire eater and a bridge builder at the same time, I asked Grayson at our lunch?

“You can do both,” Grayson said.