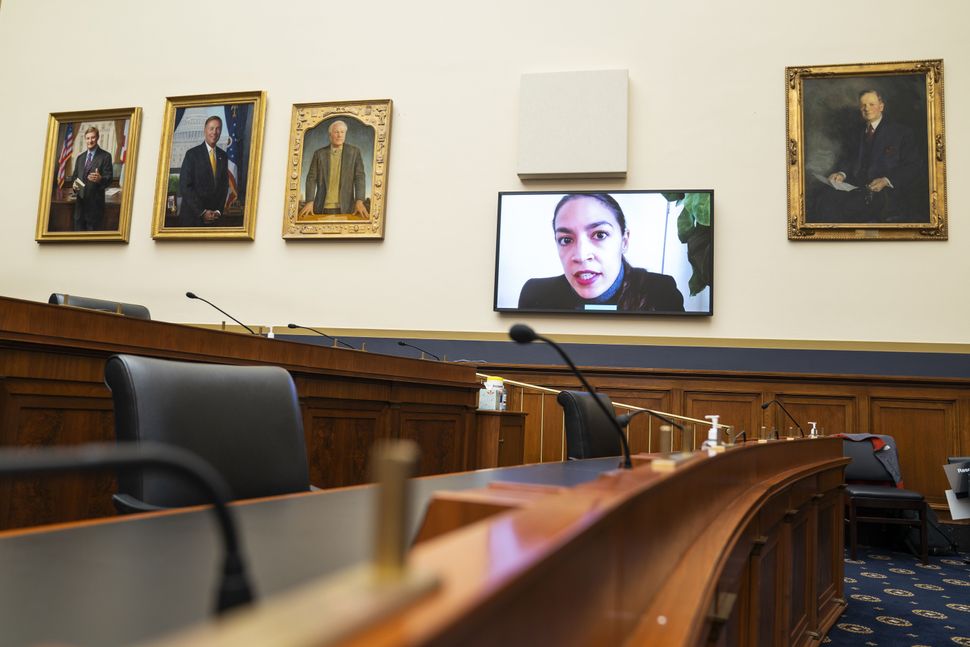 Representative Alexandria Ocasio-Cortez, a Democrat from New York, speaks via videoconference during a House Financial Services Committee hearing in Washington, D.C., U.S., on Wednesday, Dec. 2 2020. Powell and Mnuchin both backed more fiscal stimulus to bridge the U.S. economy through the next few months of the pandemic amid promise for Covid-19 vaccines. Photographer: Jim Lo Scalzo/EPA/Bloomberg via Getty Images Photo by Getty Images

With the escalation in Israeli-Palestinian violence exposing a new rift among elected Democrats, the leader of the largest advocacy organization for Jewish Democrats said there is a “new paradigm” that should allow for more nuanced debate.

“There is a new pro-Israel paradigm in the Democratic Party which rejects the false dichotomy of the past,” Halie Soifer, chief of the Jewish Democratic Council of America, said in a Wednesday press release. “Being ‘pro-Israel’ and ‘pro-Palestinian’ are not mutually exclusive, and are no longer viewed as a binary choice.”

The statement comes amid a barrage of criticism that Democrats are abandoning Israel as the Jewish state faces rocket fire from Hamas. Bernie Sanders, the Vermont senator, is planning to introduce a resolution Thursday condemning the $735 million U.S. sale of missiles to Israel, while New York’s Alexandria Ocasio-Cortez and Michigan’s Rashida Tlaib are proposing a similar measure in the House.

Those moves come after Rep. Gregory Meeks, D-N.Y., called off a plan to send a letter asking the Biden administration to delay the weapons sale and as a measure introduced by Rep. Betty McCollum, D-Minn., to restrict American military aid to Israel gains support.

The JDCA opposes efforts to condition aid to Israel and Soifer said her organization did not agree with the stance toward Israel taken by Sanders, Ocasio-Cortez and some other progressives.

Soifer said in an interview that being pro-Israel included supporting the country’s “right to defend itself,” and pointed to Democratic Sens. Bob Menendez of New Jersey and Chris Coons of Delaware as examples of stalwart supporters of Israel who have also expressed concerns about Palestinian rights in recent days.

“The overwhelming majority of Democrats strongly support Israel’s security and right to self-defense against Hamas terrorist attacks, while also supporting Palestinians’ safety and human rights,” she said in the Wednesday statement.

Many critics of these measures are Republicans who have tried to put Soifer and pro-Israel Jewish Democrats on the defensive. But the advocacy group Democratic Majority for Israel has also been feuding with progressive Democrats over the conflict, tangling with Mark Pocan of Wisconsin for his condemnations of Israel, and amplifying accusations that Ocasio-Cortez is “veering on” antisemitism in her criticism of Israel.

The Jewish Democratic Council of America was created in 2017 and effectively serves as the Jewish arm of the Democratic Party. The group, which worked closely with President Joe Biden’s 2020 campaign, describes itself as “pro-Israel” and lists “a strong U.S.-Israel relationship” among its priorities; then-Israeli Ambassador to the United States Ron Dermer spoke at the group’s launch and praised its mission.

Soifer acknowledged in an interview last week that Democrats are responding to the current conflict in Israel and Gaza differently than they did during the last major war in the region, which took place in 2014, or during earlier conflicts between Israel and Hamas.

“Democrats are responding to the complexities presented by the current situation,” Soifer said, referencing the Hamas rockets being fired at Israeli civilians, air strikes by Israel against targets in Gaza, and Arab-Jewish violence within Israel.

“You don’t hear Democrats wavering on Israel’s right to defend itself,” Soifer said. “What you do hear is an additional level of nuance from Democrats reflecting the extremely challenging myriad of issues on the ground.”