Israeli Olympic triathlete has family and country riding on his shoulders 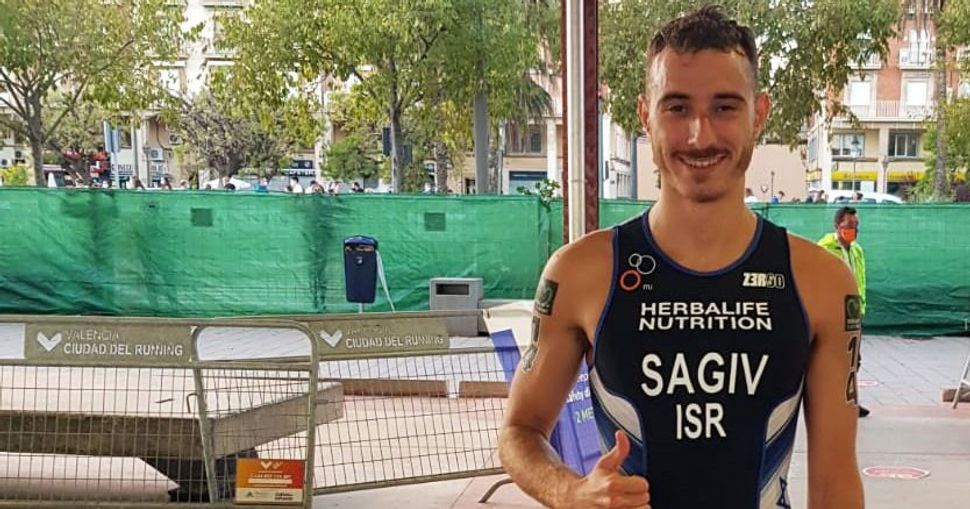 It is not easy being an Israeli athlete like Shachar Sagiv, training to compete in the upcoming Tokyo Olympics while his country is engulfed in violence.

“I see what’s going on in my country right now and it’s really, really hard for me,” Shachar said. “At the same time, it gives me the power and the strength to race harder, and to show the Israeli flag on my suit with full pride.”

The 27-year-old is one of just two Israeli triathletes who will compete in the Tokyo Olympics this summer. The other is his younger brother, Ron.

For Shachar, who is ranked 12th among male triathletes worldwide, competing at this elite level is a family affair. Not just because of his 24-year-old brother. Their father, Shemi Sagiv, represented Israel as a marathoner in the 1984 Olympics in Los Angeles. Today, their father works as a chiropractor, but has set aside cracking backs in favor of coaching his sons toward their Olympic goals.

In a video interview from his modest room at the triathlon training camp in Girona, Spain, where he is spending most of his time before the Olympics, the dark-haired Shachar spoke with the Forward about how he is preparing for the upcoming Games. This Olympics will be unique because COVID-19 precautions mean that there won’t be anyone cheering him on.

Raised in Zichron Yaakov, in northern Israel, Shachar ran his first triathlon at 8 years old after being encouraged by his father. The youngest son, Tomer, who is 20, is the most gifted triathlete in the family but doesn’t want to pursue it, said Shachar. He is presently serving in the Israeli military.

Brothers Ron (left) and Shachar (right) will both be competing in the triathlon at the Tokyo Summer Olympics. Courtesy of Sagiv Family

When he was 15, Shachar moved to Israel’s Orde Wingate Sports Academy, where he attended high school while he trained. “That gave me the option to achieve my goals, going to the Olympic Games,” he said. “Then I really wanted to make it a career.” He served in a special unit during his requisite military service which allowed him to continue training and travelling to compete, while he also coached soldiers in special fighter units in power lifting and running skills.

This will be the first Olympics for both Sagiv brothers. It was only at the last Summer Games, in Rio in 2016, that the first Israeli triathlete competed. Of the 55 triathletes there, Ron Darmon came in 26th. Triathlon first became an Olympic sport at the 2000 Summer Games. Up to three athletes are permitted to represent each country in the Olympic triathlon. Only the Sagiv brothers qualified from Israel this year, Shachar said, and no Israeli women passed the trials.

Shachar tries not to dwell on the Olympics as different from any other race. “Everyone at this level is good physically, everyone has done the hard work to get here. From now on it’s only mentally who will crack first and who wants it more.”

“Being at the top of the biggest sports event in the world is an amazing feeling for me, my family and my friends. For my mother, Rachela, too. I’m excited and happy not only for me, but for all of the people surrounding me who are part of this journey. They give me the power.”

After the Tokyo Olympics, Shachar said he wants to “just continue growing as a triathlete.” Competitors peak at age 30 or 31, he said, somewhat older than in other sports. He expects to compete in the 2024 Summer Olympics, which will take place in Paris. “After Paris, the 2028 Olympic Games will be in Los Angeles. If I managed to compete there, it would be an amazing closure for our family,” as that is where his father competed.

“This is only the beginning of my journey as an international athlete. There will be much more to come after these Olympic Games,” Shachar said. “I will try to bring more medals to my country. I’m not only representing my flag. I am representing my people.”

Israeli Olympic triathlete has family and country riding on his shoulders