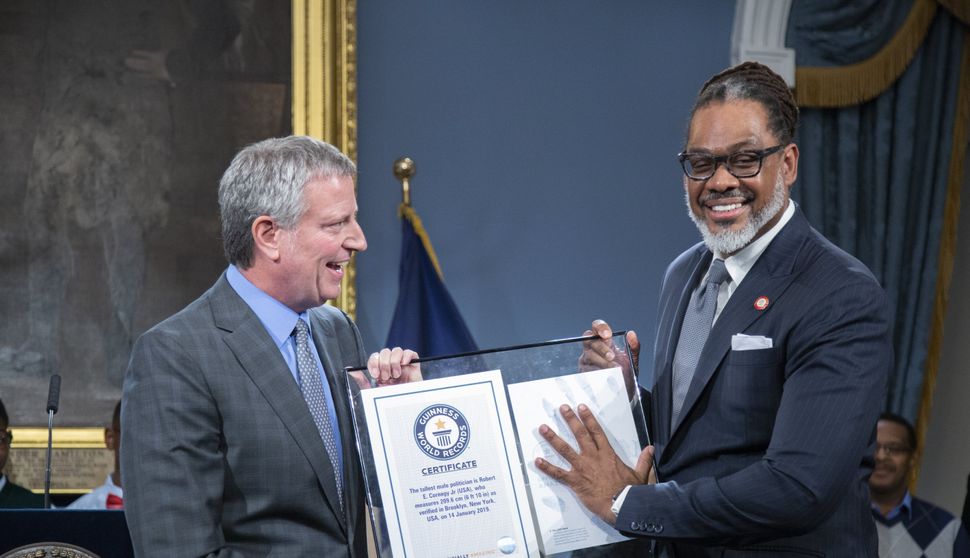 Not long ago, Robert Cornegy, a member of the New York City Council, was dubbed the tallest politician in the world. As borough president, he said, he can make the world look up to Brooklyn.

Cornegy, 55, who played professional basketball in Israel and talks about his strong affinity for the Jewish state, is one of the leading candidates — along with councilmember Antonio Reynoso and Assemblywoman Jo Anne Simon — for the office in the June 22 primaries. His height may help him stand out in a crowded field of 14.

At 6-foot-10, Cornegy earned the title of the tallest politician from the Guinness Book of World Records in 2019 after submitting several doctors’ measurements of his body — both standing up and lying down. “He’s brought politics to new heights,” NYC Mayor Bill de Blasio, who himself stands at 6-foot-5, said in a ceremony marking the achievement. In November 2019, Cornegy lost the title to a Republican politician in North Dakota, Jon Godfread, an insurance commissioner who was a centimeter taller. “I don’t mind losing, but I lost to someone who holds an elected role that I’ve never even heard of before,” Cornegy quipped in a recent sit-down interview. “But I was very grateful to be able to be among the people who internationally represent the borough of Brooklyn.”

The challenges of being tall, he said, is that you are always noticed and people tend to have very high expectations that you’re going to be a leader and speak out. When he was a child, people always assumed he was older than he was. He’s confident that his height and his political experience will make him a strong voice for Brooklyn. 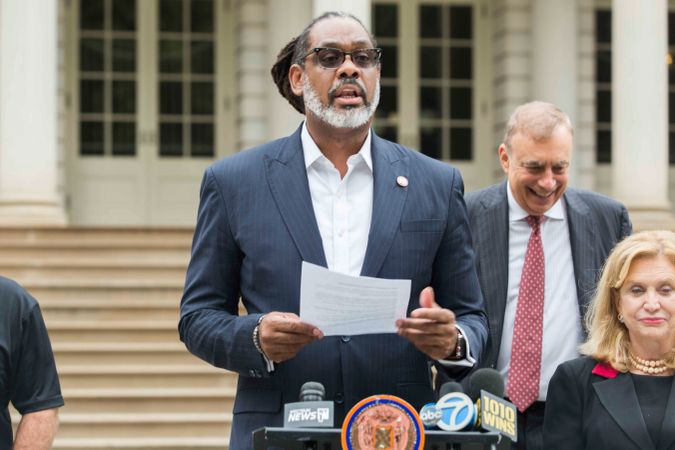 The office is a relatively ceremonial one, though, without many enumerated powers. But among the responsibilities are appointing community board members, issuing advisories on land use, convening task forces to discuss weighty issues, and sponsoring legislation before the City Council, in addition to using the role as a bully pulpit. “The borough president’s office is such an undefined role that it allows you to actually bring your level of activity to that role,” Cornegy said about his decision to run this year after being term-limited in the council.

Marty Markowitz, the longtime former borough president, was largely known as the cheerleader of Brooklyn. His successor Eric Adams focused on social justice, development and building multicultural bridges. Cornegy said he would use the office both to amplify the needs of the people who live in this borough and to boost its image. “I am the epitome of dualism,” he said in an hour-long interview. “I’m a little bit of a showman, but there’s also the solid policy and legislative acumen that I have that fits my role.”

“While I’m this athlete, I also teach at MIT,” added Cornegy, who is chairman of the housing and buildings committee and an adjunct professor at the Massachusetts Institute of Technology. “I think it’s that kind of nuanced leadership that you get to take to Borough Hall.”

The competitive race is drawing attention in Brooklyn’s Jewish communities, which make up 25% of the borough’s population and over half of the 1.1 million Jewish residents in the city, according to the 2011 survey by the Jewish Community Relations Council of New York. Adams, the current borough president who is running in the Democratic mayoral primary, called Brooklyn “the Tel Aviv of America.” 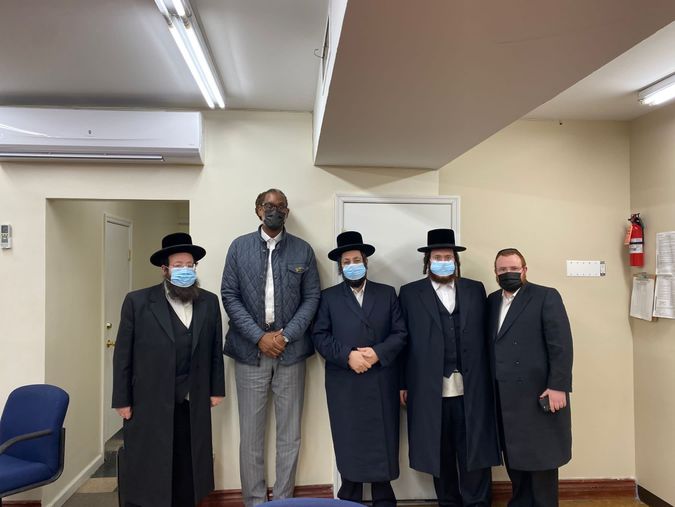 Cornegy, 55, among a number of candidates, has courted the Orthodox voting blocs, which historically have been influential in local elections. He recently earned the backing of the Bobov Hasidic sect in Borough Park.

His support in the Orthodox community is rooted in the independence he has demonstrated while in the council and his strong support for Israel.

He said he inherited his passion for public service from his father, the late Dr. Robert E. Cornegy, Sr., who served as the longtime pastor of Mount Calvary Baptist Church in the Bedford-Stuyvesant neighborhood. But it was only after a successful career as a basketball player that he sought political office.

In 1991, after spending two years playing for the Paşabahçe club in Istanbul, Turkey, Cornegy went to Israel to play for Maccabi Petah Tikva. His two years in Israel coincided with conflict — the first intifada that began in December 1987 and ended in September 1993. Cornegy recalled witnessing a vehicle-ramming terrorist attack at a military bus stop in Tel Aviv, which he said made him understand what it was like to live under the constant threat of terror. He also saw firsthand the dedication of Israeli citizens to the protection of their country when his Israeli-born teammates would spend the weekend on military training instead of practicing for important games, a sacrifice which at first seemed unfathomable to him. “Learning their commitment to their country and to the protection of their soil inspired me tremendously,” Cornegy said, adding that he would sometimes be invited to watch them train.

Cornegy said that that “lived-learned experience and feeling the residual effects” on the Jewish people after the Holocaust, shaped his strong support for Israel in elective office. 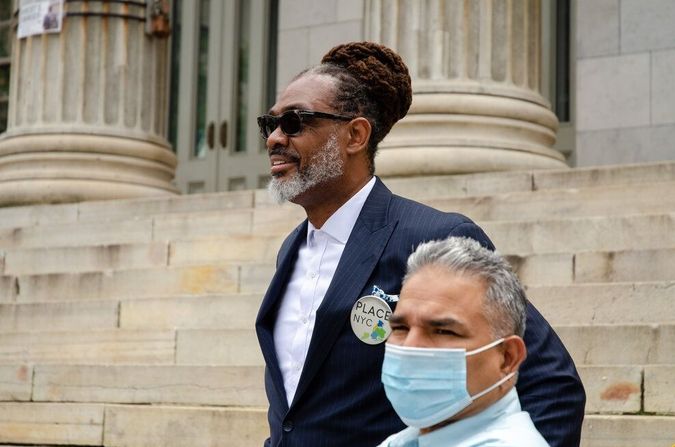 Last year, Cornegy expressed shock at the Democratic Socialists of America for asking council candidates to pledge “not to travel to Israel if elected… in solidarity with Palestinians living under occupation.” The DSA later clarified that it was referring to the annual trips sponsored by the Jewish Community Relations Council. Cornegy said he was ‘outraged” when he saw the questionnaire. “I lived there, seeing an entire culture in a different context. How dare you, from your couch, make those kinds of blanket statements against Israel,” Cornegy said, explaining his reaction to the questionnaire. “I was pissed off because I got to be there, and how dare you tell me what those trips meant to me,” he added.

Cornegy was first elected to the council, representing the 36th District, in 2013. Four years later, he ran to become the council speaker but dropped out of the race after failing to garner enough support. 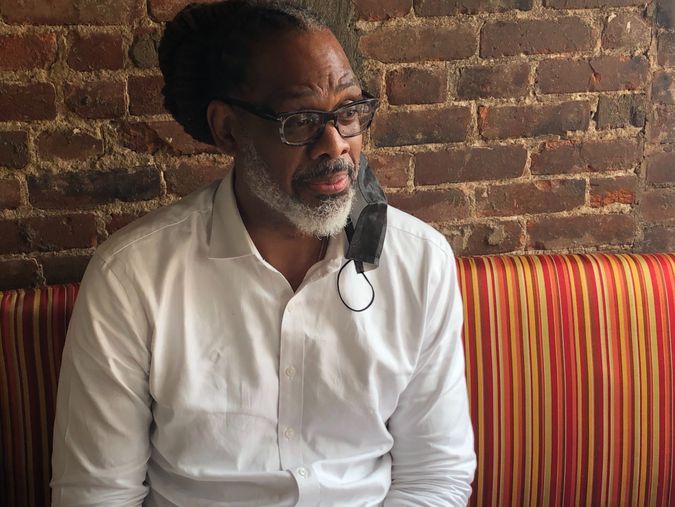 Robert Cornegy, a member of the New York City Council and candidate for Brooklyn borough president, in an interview with the Forward Image by Jacob Kornbluh

Cornegy said he was “very disappointed” with his colleagues at the time. “Being an athlete, I spent a lot of my time playing in all-star games, where you take the best and brightest from a particular region, assemble them as a unit and perform against the same group from another region,” he explained. “So I thought that when I went to the City Council, it was the all-star game — that everybody from the 51 districts around the city had put together the best and the brightest and sent them to represent them. That wasn’t so much the case when I got there. It was way more political than I thought it was.”

His experience on the basketball court is what Cornegy thinks distinguishes him from his competitors. “When you’re in that box hole, the vision and the focus is on winning. You don’t care what others look like or where they come from. All you care about is their commitment to combining all of the talents around you to get to a particular goal.”

“My focus now is on winning and doing a great eight years,” he said.