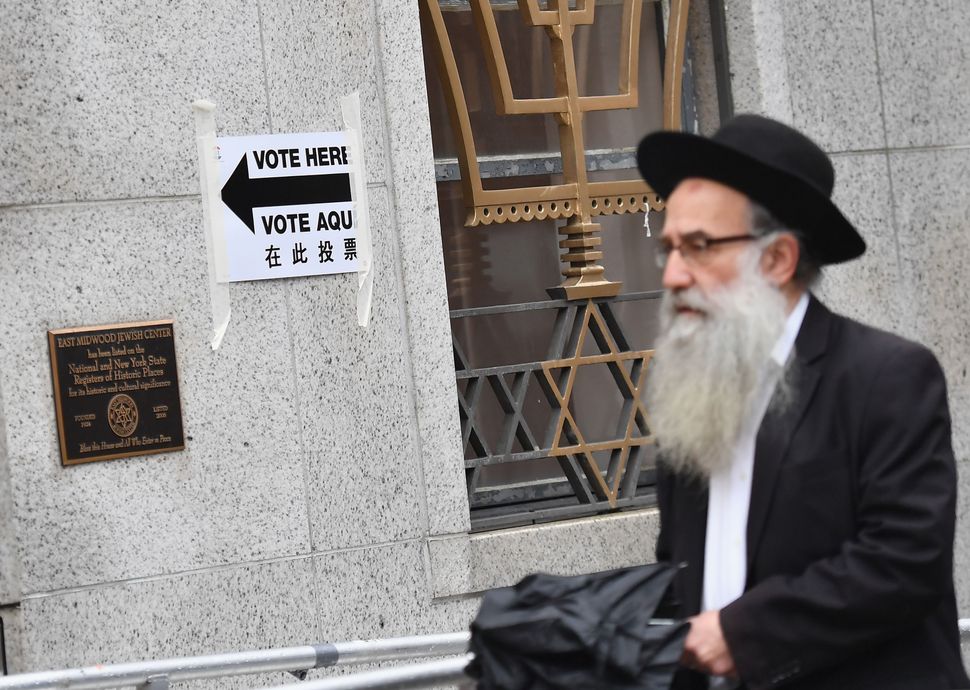 Andrew Yang promised he would not take action on secular education in yeshivas. Eric Adams visited a Brooklyn yeshiva to learn about how it teaches science, math and English. Ray McGuire hosted a roundtable with rabbis in which he boasted about his comfort level praying at the Western Wall.

These are just a few examples of the pointed outreach that leading candidates in the race for mayor of New York have been making to court the city’s Orthodox Jews, which historically have been an influential voting bloc in local elections.

Experts estimate that New York’s 1.1 million Jews make up about 20% of the voters in the city’s Democratic primaries. Historically, they have proved a powerful and even decisive factor in mayoral elections, particularly the approximately 80,000 voters in Brooklyn’s Haredi, or ultra-Orthodox communities, where rabbinic dictates about ballot choices can lead to a reliable bloc of votes.

David Dinkins’s 1989 victory over incumbent mayor, Ed Koch, who was Jewish, was attributed in part to cutting Koch’ share of the Jewish vote down to two-thirds. Mayor Bill de Blasio barely avoided a run-off in the crowded Democratic primary in 2013 by winning more Jewish voters than his competitors. And in the 1993 general election, when Rudy Giuliani beat Dinkins by a little more than 40,000 votes, exit polls showed that Giuliani received close to 70% of the Jewish vote, including nearly 100% of the Orthodox community. 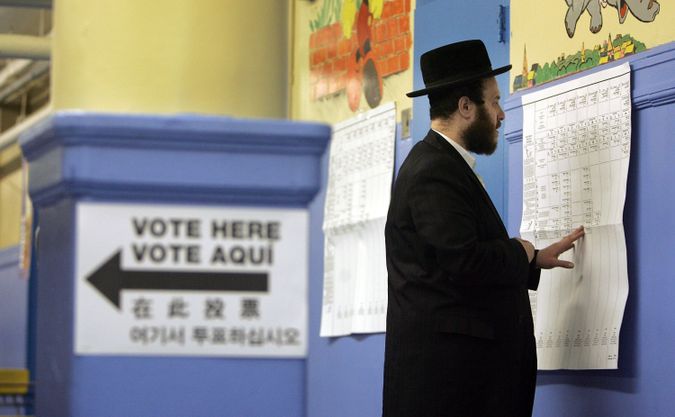 Prof. Ester Fuchs, director of the urban and social policy program at Columbia University’s School of International and Public Affairs, explained that it has worked well for candidates to reach out to leaders of Orthodox communities.

“Their clout came from their numbers and their ability to organize and ensure that their communities would go to the polls and vote for the person that their leadership did a deal with,” she said in a recent interview.

This year’s June 22 primaries, which have attracted 30-some mayoral candidates and involve a new system of ranked-choice voting, present a critical test of the bloc’s power. On the one hand, the opportunity to secure even the second- or third-choice spot on a large number of ballots could prove pivotal for candidates. On the other, an increase in Orthodox support for the Republican Party during the Trump years could dilute the community’s power in the primaries.

(About two-thirds of New York’s voters are registered Democrats, making the party’s primary all-but determinative of the November election; Six candidates are running in the GOP primary)

The ranked-choice experiment, which was implemented to eliminate the need for run-off elections, asks voters to delineate up to five choices on their ballots. If no single candidate wins 50% of the first-choice votes, the candidate with the fewest first-choice votes is eliminated and those ballots reallocated to their voters’ second choices. That process continues, with third-, fourth- and fifth-choices used when second-choice candidates have already been eliminated, until one candidate wins more than 50%.

Sid Davidoff, a former top aide to Mayor John Lindsay, suggested that rank-choice voting gives voting blocs “a step up” because they now have the ability to recommend multiple candidates and thus not burn bridges with a number of potential victors. “They now get a couple of bites at the apple that they didn’t have before,” he explained.

Jerry Skurnik, a political consultant who worked for Koch, said that rank-choice voting “probably does make it even more important” to court the Orthodox because 15,000 votes could be the difference in making sure you are not eliminated early. Even the difference in being voters’ third versus fourth choice could affect the outcome, he said, “so it’s worth going after these votes.” 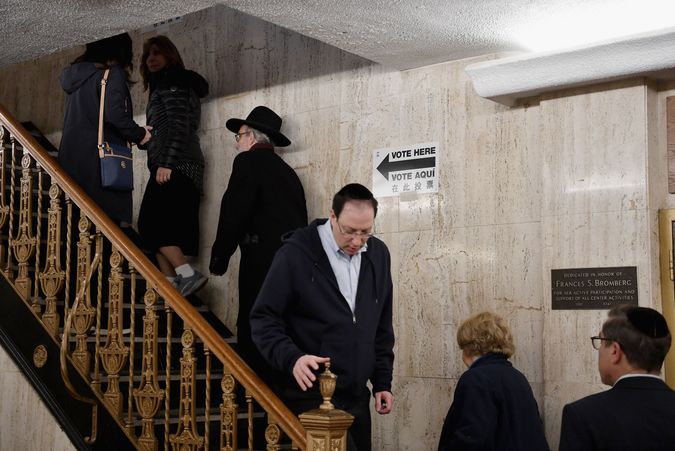 While the primary is still three months away, the candidates haven’t lost time courting the Jewish voting blocs. In recent weeks, most of the leading candidates participated in private Zoom calls with leaders of the Orthodox and other faith-based communities. They have also publicly expressed their views on hot-button issues, such as how City Hall should engage with yeshiva curriculums and combat antisemitism. And they have touted their support for Israel and opposition to the Boycott, Divestment and Sanctions movement in a recent Forward survey.

Negotiating with several candidates and educating voters about rank-choice voting will be key in the community’s ability to enhance its influence, Professor Fuchs said. “Coalition formation during the election process is going to be really important for rank-choice voting,” she explained, ”and if you can offer a block of votes, even as a No. 2, that will enhance your power in the political process.”

Several leaders in the Orthodox community, who spoke on the condition of anonymity not to reveal internal discussions, said that there’s concern that people will only pay attention to the one candidate who seems to be most appealing. “There’s a natural inclination in the community to be set in its own ways and not always recognize the change that’s coming, and it’s to their disadvantage,” one leader said.

Davidoff, who is chair of Davidoff Hutcher & Citron, a government-relations firm, predicted that most people will focus on figuring out their first choice and not bother checking the entire list — especially if it appears that there’s a particular candidate that seems to support their agenda. So far, he said, Yang has distinguished himself by taking a bold stance on yeshiva education, an issue that has for years had many leading Haredi figures concerned about city and state intervention.

And while for decades the Orthodox community’s power in local elections has been its leadership’s ability to deliver a homogenous bloc of votes, that could prove more difficult now, because of the increased polarization over Israel and religious freedom.

“The extent to which individuals stop listening to the leadership and decide that they have learned something from their experience in national politics, when they may have paid more attention to the news and social media and they decided to make up their own mind,” Fuchs said. “That will weaken the ability of the leadership to have influence by controlling the community’s vote.”

Hank Sheinkopf, a Democratic campaign consultant, agreed. “This election is a test of the frum and observant communities’ ability to turn out to vote,” he said. “This is an important moment for Jews in New York and their influence. They need to prove they have power to force outcomes.” 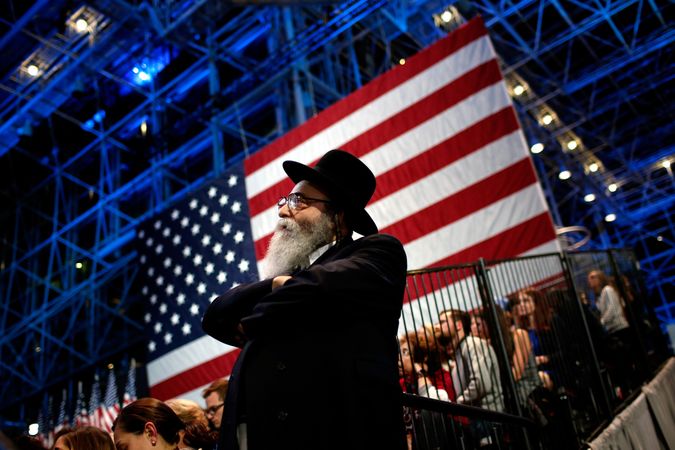 In past elections, the candidates would meet with leaders of major Jewish organizations and rabbis of the prominent Hasidic sects in the final weeks of the campaign. Pictures of the visits would serve as an indication of who the favorite candidate was. That was followed by newspaper ads and street posters announcing the list of candidates to vote on Election Day. In recent years, community members have become more engaged on social media, especially WhatsApp, leading to fierce debates and elevating independent voices.

In the 2020 presidential election, turnout in the Orthodox neighborhoods was between 55 to 62%, according to recent data accumulated by the Jewish Community Relations Council of New York and reviewed by the Forward. Turnout was significantly higher when compared to the 21% in the 2013 Democratic mayoral primary.

“A lot of people will only come out and vote in the primary if there is a candidate they really feel strongly in favor of or strongly against,” Skurnik said.

But in this year’s election, in the aftermath of the coronavirus pandemic and given the confusion over the voting system, turnout may be lower than in previous elections, predicted David Pollock, JCRC’s associate executive director. “That will strengthen the power of groups that can make their constituents turn out to vote,” he said. “For example, unions with sophisticated political operations are important. So, too, are Orthodox leaders.”

Yeruchim Silber, the New York director of government relations for ‎Agudath Israel of America, expressed confidence that members of the Orthodox community will become more engaged and turn out to vote to defend their interests at a time of urgency.

He pointed out that Giuliani received nearly 100% of the Orthodox vote in protest of Dinkins’ handling of the violent protests in Crown Heights in 1991. Similarly, Brooklyn’s Orthodox Jews who were outraged at the way Mayor de Blasio dealt with their neighborhoods around the coronavirus pandemic and are concerned about the rise in antisemitism and the resurgence of the Democratic Socialists of America will be looking to have their voices heard this year.

Silber said that Agudath Israel, which as a 501(c)(3) cannot endorse candidates, has already launched a campaign to educate voters about the ranked-choice voting system.

Some experts caution that focusing their outreach on one or two key issues could be a risky move for the candidates. By locking up a certain voting bloc in Brooklyn, candidates are potentially alienating some Orthodox voters in neighborhoods like Riverdale and Kew Garden Hills or the broader Jewish vote, which tends to be focused on social-justice issues. The New York Jewish Agenda, a progressive group, for example, is focused on bail reform, anti-racism and healthcare

Taking the open-door approach that most of the candidates have pledged to do may be more valuable than a commitment on specific issues that will be decided on the state level and be a safer bet for community leaders ahead of the primary.