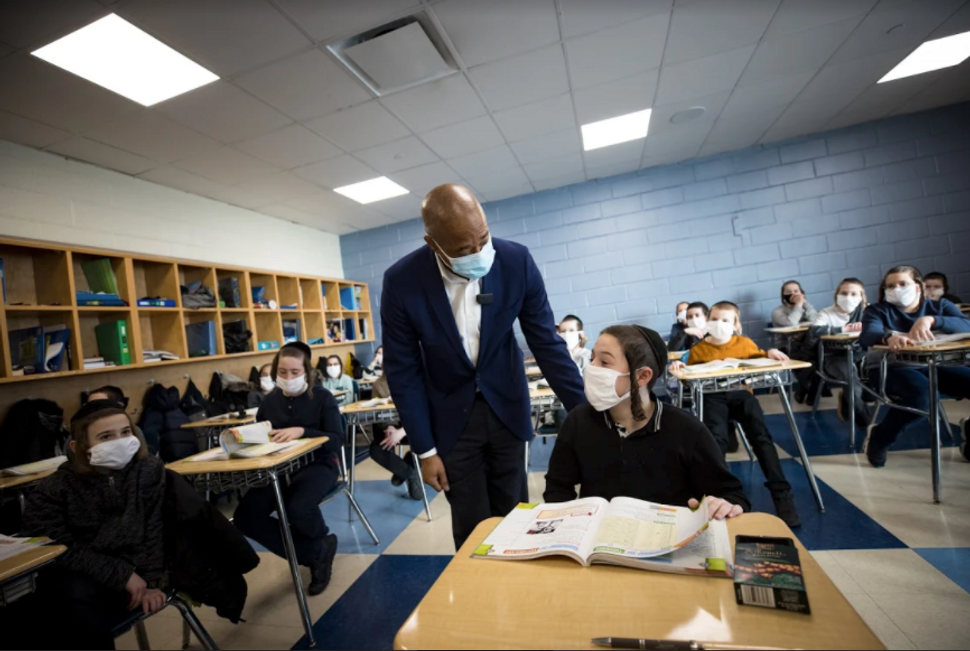 Eric Adams, one of the leading candidates running to be mayor of New York City toured a Brooklyn yeshiva on Monday that had been on a list of schools subject to investigation over adequate secular education standards and came away with a positive impression.

”I was really impressed by what I saw,” Adams told the Forward on Monday night. “Watching those children understand grammar, understand English, saying they like writing and reading, it was amazing.”

Adams, the Brooklyn borough president, declined to identify the yeshiva, which was in the Hasidic neighborhood of Borough Park. Assemblyman Simcha Eichenstein, who invited Adams for the hour-long tour, said it was among the “29 yeshivas most heavily scrutinized by the city.”

The question of how much science, math and English education should be required in private yeshivas has been roiling the Orthodox communities in recent years. A city Department of Education report in 2019 found that more than half of the yeshivas investigated were not providing the amount of secular education that is “substantially equivalent” to that of public schools, as required by state law. 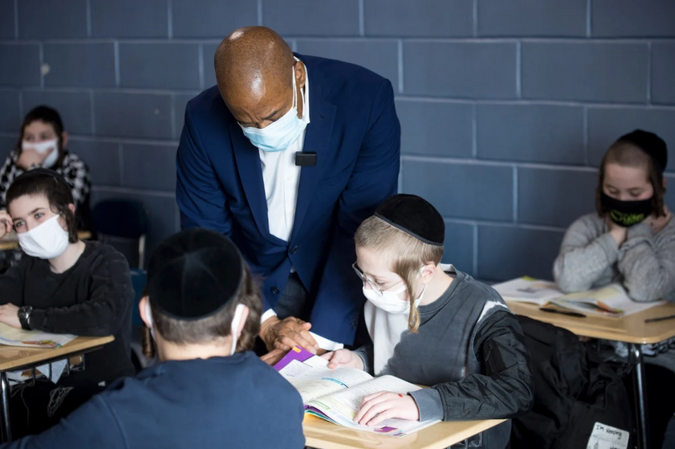 ‘I was really impressed by what I saw,’ Eric Adams said. Photo by Benjamin Kanter

Eichenstein, who is Orthodox and was elected in 2018 to represent a district that includes Borough Park, said he wanted Adams, who a recent poll showed running second among some 30 candidates in the crowded June 22 Democratic primary, to see the much-discussed yeshiva situation firsthand. “Adams had the opportunity to step into any classroom, talk to any student, and review any of the classroom materials that were of his interest,” Eichenstein said.

Adams compared the visit to another meeting he recently had with African-American teachers and students who felt that Anglo-Saxon standards did not give Black children the opportunity to identify with curriculum material that lacks cultural relevance for their community.

“It’s obvious that the laws are not working,” said Adams, who is Black. “The fight that the Jewish community is having is no different than the fight that the African-American and the Hispanic communities have. We must fight to change how we evaluate schools and understand the importance of culture and religion in school.”

The next mayor will play a key role in how to enforce state laws governing yeshiva education. Last month, a group of 100 rabbis and Jewish leaders signed a letter to candidates about the importance of secular education in the yeshiva system spearheaded by Yaffed, a group founded by former yeshiva students and parents upset about the curriculum.

Andrew Yang, the current frontrunner in recent polls, promised he would not take action to boost secular education in yeshivas if elected mayor. The other leading candidates — responding to a Forward survey — said they would be working closely with the community to implement changes and fully enforce the law when needed.

But following his visit on Monday, Adams suggested he would adopt a more proactive approach. “Albany needs to enter a re-evaluation phase on what the cultural norms are in culturally sensitive education,” he said. He added that he would invite the chancellor of the state’s Board of Regents and other leaders to visit the religious schools “so they can see this for themselves.”

Eichenstein said he is certain that what Adams witnessed “was an eye opener for him” and invited “any candidate who is willing to be objective and open minded about understanding the true facts about our yeshiva system to come with me to a yeshiva to see what it’s really like.”

In the phone interview on Monday night, Adams rejected the idea that he was taking this position to galvanize support in Brooklyn’s Orthodox communities, an influential voting bloc. “Everyone who knows me knows that I speak my mind and I tell the truth,” he maintained. “That’s why I wanted to go to the school today, to actually visit on my own and hear from the students that are there and look at the books that they’re using.”

Adams urged the outspoken critics of the yeshiva education system to “come see how these children are expanding their knowledge and not being limited in their knowledge.”

Naftuli Moster, Yaffed’s executive director, criticized Adams for using a “one-hour, carefully choreographed visit” to “discredit the experiences and testimony of those who have attended these Yeshivas for 14 years.”

“These Yeshivas have gone to great lengths to prevent city education officials from entering the buildings to see what kind of education is or isn’t being provided there,” Moster said in a statement to the Forward on Tuesday. “Mr. Adams is a mayoral candidate seeking the endorsement of a bloc vote – not an educational expert.”